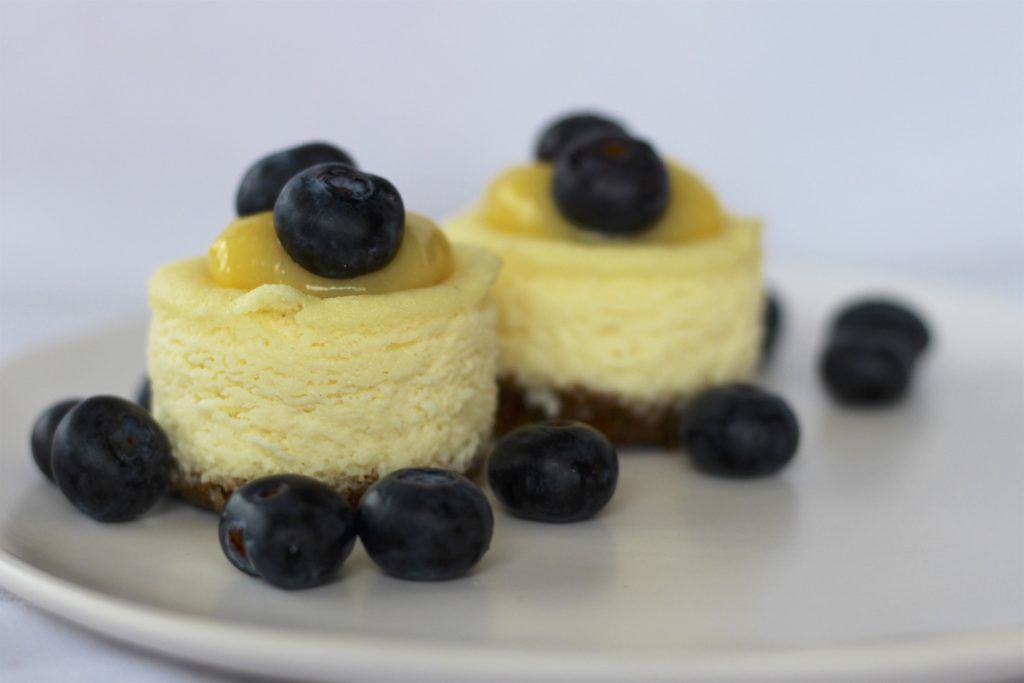 We were supposed to have a dinner party this weekend – it was Italian-themed with homemade pasta and lots of wine and bread and maybe a vegetable or two tucked in for good measure. There’s some epic-for-Seattle epic weather happening here this weekend, and since we can barely drive in the rain (go figure), snow driving definitely isn’t our things. So, no dinner party for us.

I had, however, spent a more than reasonable amount of time trying to come up with a dessert that would be light and refreshing at the end of a heavy meal. Since we were going with an Italian theme, I thought about cannoli (who doesn’t want to eat a cannoli?!) but between the equipment and my lack of enthusiasm about having a giant pot of boiling oil in my house (not that I’m above that, just not in the mood), I decided against it. But, I do love me some ricotta cheese, and eventually I settled on these Almond Ricotta Mini Cheesecakes that would be tangy, tart, sweet, and perfect treat at the end of a meal.

I found a few recipes online that mimicked what I wanted – a light cheesecake that’s rich with flavor, featuring an almond crust. I also wanted some sharpness, so I made a lemon curd for the top, and served it with some blueberries for color and a bit of extra flavor. Since this should be made in advance, it was great for a dinner party where there’s always plenty of running around to be done – it was nice to have a task that was completed.

I altered the original recipe (linked here), only slightly, to make less batter. A few other notes:

Side note, since we cancelled the dinner party, we ate some of the cheesecakes last night; may plan was one per guest (because of the heavy meal). Though, that may have been off. Brandon easily polished off four mini cheesecakes 😀. 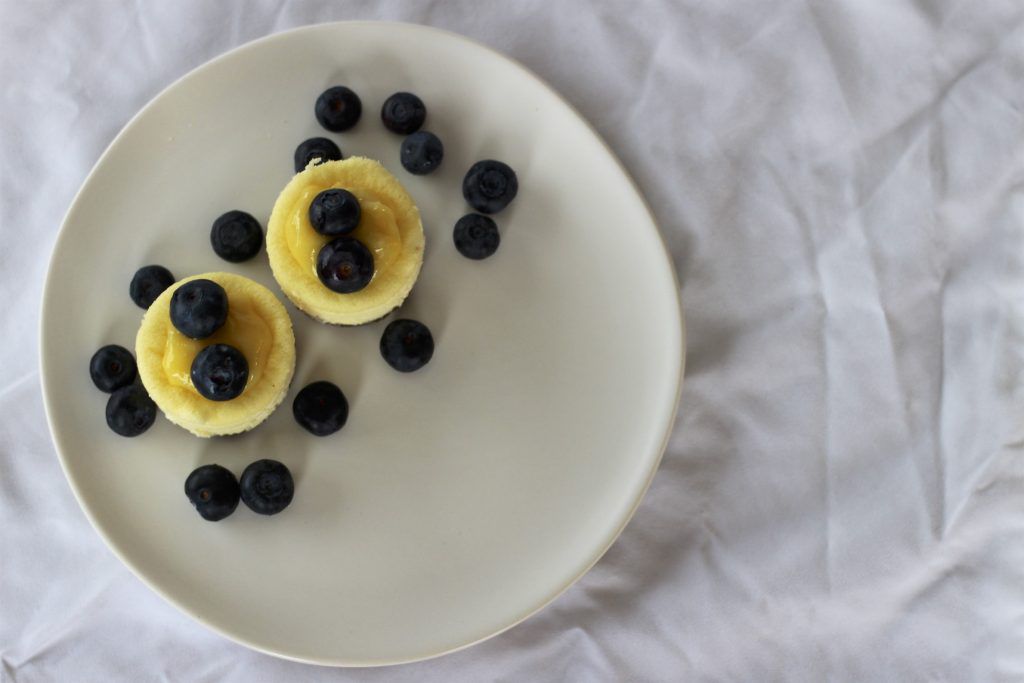 For the Crust
Preheat the oven to 350°F.

Prep the cheesecake tins by wrapping each individual tin with aluminum foil, and securing the foil with a rubber band (it sounds like a pain, but only take a few minutes, I promise – just cut your aluminum foil in to appropriately sized squares before you start wrapping and securing, and it goes quickly).

Whirl the cookies to a powder in a food processor or use a rolling pin. Transfer the crumbs to a small bowl and stir in the butter to evenly coat them. Evenly divide the crumb mixture among the tins, then pat down. Refrigerate until needed. Can be made two days ahead of time.

For the Filling
In a stand mixer or by hand with a hand held mixer, beat the ricotta cheese with the mascarpone and sour cream. Beat in the sugar and eggs one at a time. Beat in the salt and flour.  Beat in the extract.

Divide the batter among the tins (depending on the size of your tins, you may have a bit extra). Gently tap tins to even out batter (or use a knife or offset spatula) Place the pan in a larger pan and carefully pour boiling water into the larger pan until it is about 1-inch up the sides of the pan.

Bake on the middle oven shelf for 20-25 minutes. Remove both pans oven, then removing the cheesecake tins from the water bath, and cool the cheesecakes on cooling rack for about 20 minutes. Cover the top of the cakes loosely with wax paper and refrigerate several hours or overnight.

When ready to serve, allow the cake to come to room temperature. Remove the aluminum foil from the tins, and gently push oup on each the springform pan rim to carefully remove each cake. Top with lemon curd, blueberries (if you’d like!), and serve.

In a large bowl, beat the butter and sugar with an electric mixer, about 2 min. Slowly add the egg and yolk. Beat for 1 min. Mix in the lemon juice. The mixture will look curdled, but it will smooth out as it cooks

In a medium, heavy-based saucepan, cook the mixture over low heat until it looks smooth. (The curdled appearance disappears as the butter in the mixture melts.) Increase the heat to medium and cook, stirring constantly, until the mixture thickens, about 15 minutes. It should leave a path on the back of a spoon and will read 170°F on a thermometer. Don’t let the mixture boil.

Remove the curd from the heat; stir in the lemon zest. Transfer the curd to a bowl. Press plastic wrap on the surface of the lemon curd to keep a skin from forming and chill the curd in the refrigerator. The curd will thicken further as it cools. Covered tightly, it will keep in the refrigerator for a week and in the freezer for 2 months.

Posted on February 10, 2019
This entry was posted in baking, desserts and tagged cheesecake, italian desserts, ricotta.

One Response to Almond Ricotta Mini Cheesecakes with Lemon Curd