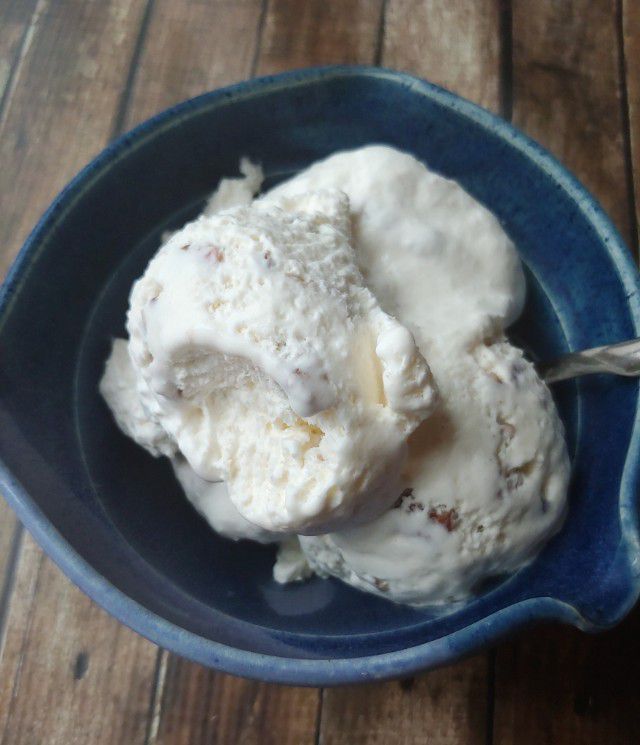 Everyone seems to LOVE bourbon.  There are bourbon bars and distilleries everywhere I look here in Denver.  I have tried for years to like bourbon and just haven’t.  Recently I tried again… and what do you know?  I see what everyone is talking about now.  Did my taste buds change?

Due to my new-found appreciation for this tasty distilled spirit, I thought I would try making a simple and tasty bourbon pecan ice cream.

I got the idea for this ice cream from a recipe that doesn’t actually require an ice cream maker, Margarita Ice Cream.  Instead you whip the cream and sugar and alcohol first and then let it freeze over night.  I decided to whip it and then put it in the ice cream maker to see if I could make it a little faster.  It worked but I still had to let it set up a bit in the freezer before serving.

Probably any bourbon connoisseur would say, “Don’t waste good bourbon on an ice cream recipe!”  The Knob Creek Bourbon I like was destined to be in a little bit of ice cream but not the Stranahan’s Whiskey (that stuff is too good for ice cream!)

Admittedly I knew not to add too much alcohol to ice cream, I’ve done it before and it just doesn’t set up as well.  Alcohol doesn’t freeze!  There’s a fine line between too much and just enough and in this trial and error recipe I found it.

Four shots?  Too much.

Don’t worry the first four-shot batch that didn’t set up well is still in my freezer in its semi-soft state and is waiting to be used for something great (just not sure what that is yet).