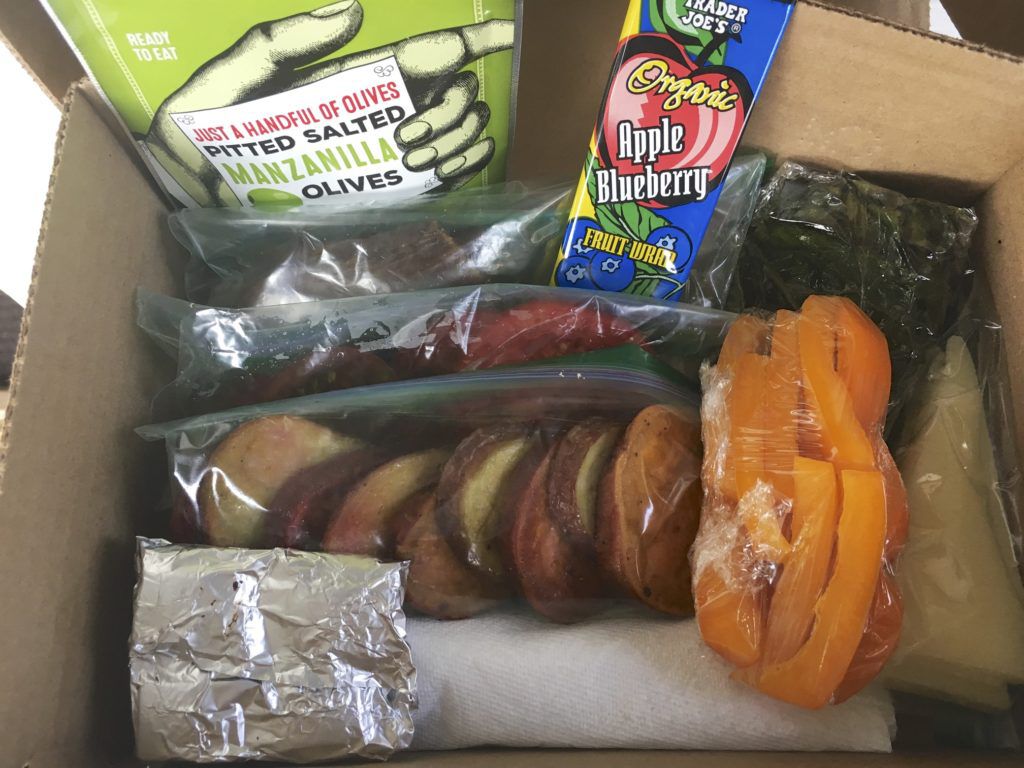 You know how, on airplanes, they sell those tightly packed snack boxes? I often find myself purchasing the one with the hummus, crackers, dried fruit, etc. I’m willing to buy them because it’s pretty healthy, filling, and (I’ll admit) I love digging through the box for all of the treats. Downside is that they’re expensive and while they do perform well as a hearty snack, it doesn’t have any veggies, and as far as I’m concerned, therefore doesn’t count as truly healthy or filling lunch.

Brandon and I recently traveled to Montreal for a short vacation (*great* city, go there!) and I decided to do one better than to depend on the airline snack – I’d make our own portable snack kits, but include fruits and vegetables while mimicking still some of my favorite parts of the airline-branded snack kits (namely: olives and chocolate). We even just so happened to have some small cardboard boxes that would that would work perfectly for a per-person sized lunch container. 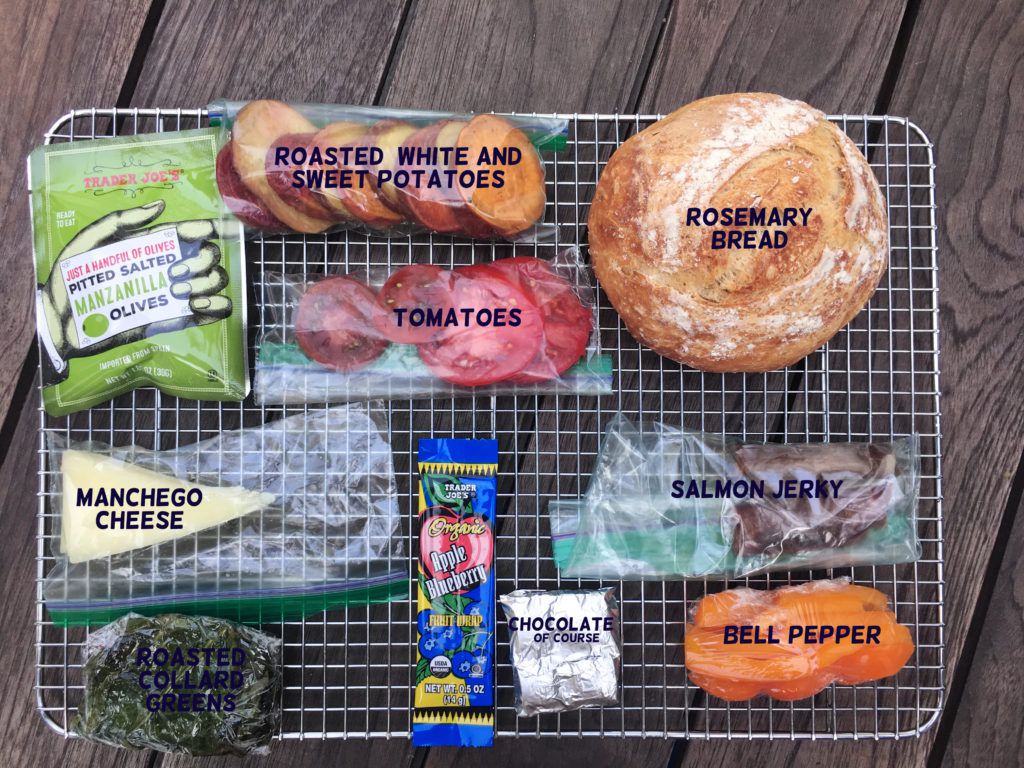 On our way to the airport, I told Brandon about my concept (I had been saving it as a surprise).  I’ll admit, he was hesitant, concerned that there wouldn’t be enough food – we were traveling for about 8 hours, after all. But, as this is a story of triumph, I’m proud to report that concerns were unfounded; and truth be told, were both a bit stuffed after working our way through all the snacks (and actually, I didn’t finish it all of mine in one sitting).

Here’s what I included, per person:

It was super fun to watch Brandon dig through the box to find all the treats. We were both glad to have access to so many veggies while being able to customize the treats to foods we really like. Also, it was great because we were able to recycle the boxes once we got to Montreal, so I didn’t need to schlep anything back home. Next time, though, I’m adding in a batch of these!

I’ll be adding this concept to our regular rotation of airline food – here’s my other go-to – and will also mention the one other benefit. It was supremely pleasing to eat our delicious, simple, homemade food and not give more money to the already overpriced airlines. I’ll admit that small amount of smuggery made the food taste even better! 🙂

Also – a final note I should mention: as she mentioned in her previous post, Streusel and I – along with our pal Erica – are heading to Sacramento in a few weeks for the International Food Bloggers Conference. And for that, nope, I won’t be brining any airplane snacks because I need to empty my stomach in preparation for all that I’ll be eating.

Part of what I love about Streusel is not just what we have in common (eating, baking, sarcasm, immersion blenders, and telling stories about the minutiae in our lives) but also what makes us different (one of us loves miniature dogs, identifies yak meat as a favorite food, and at one point had a desire to own a teacup pig; another of us has a never ending fear of social media and an inconsistent blogging habit). Case in point: guaranteed, at IFBC I’ll head straight for the Balsamic Vinegar of Modena session, where as Streus will make a beeline for the Superior Lamb workshop. But, guaranteed, we’ll both get a little giddy at the Expo, Taste of Sacramento & Gift Suite – one year, I remember I was so grabby at the Expo that I ended up nabbing a free box of cake mix, and as I was frantically trying to stuff it in to my suitcase, Streusel reminded me that I don’t bake with box mixes. Oh yeah.

Anyway – this is a long way of saying that I’m *very* excited for this year’s conference. The schedule looks great and I’m looking forward to visiting with our blogging community once again!