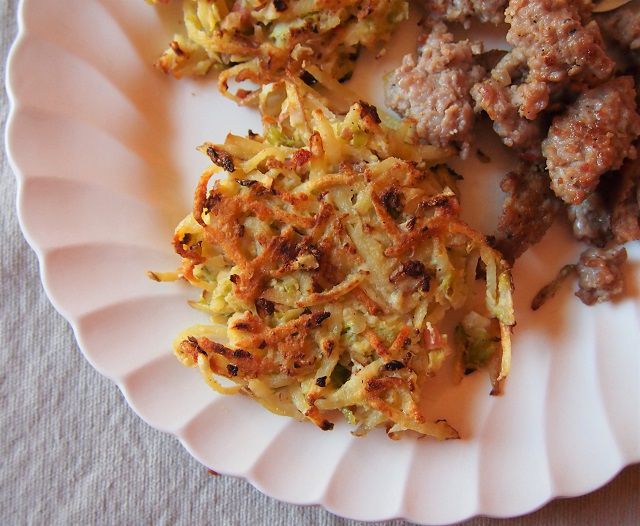 I have several staples that I buy at the grocery store every time I go and this recipe incorporates four of them…potatoes, brussels sprouts, pancetta and eggs!  This recipe was inspired (I never follow a recipe exactly) by The Whole30 Cookbook just like these dukkah potatoes and I used my favorite potato, the rooster, again.  These cakes are a two-step process but still quick and easy and SO tasty.  I served mine along side Boulder Sausage’s Breakfast Sausage!

3 rooster potatoes, cleaned but not peeled

salt and pepper to taste

Shred the rooster potatoes in a food processor and place in a bowl of very hot water for ten minutes.  While the potatoes are steeping in the hot water, cook the pancetta in a tablespoon of avocado oil until slightly crispy.  While the pancetta cooks, process the brussels sprouts in a food processor with short pulses just until they are shredded.  Add the brussels sprouts in the pan with the pancetta and cook for several minutes, lastly add the apple cider vinegar and salt and pepper to taste and set aside to cool. 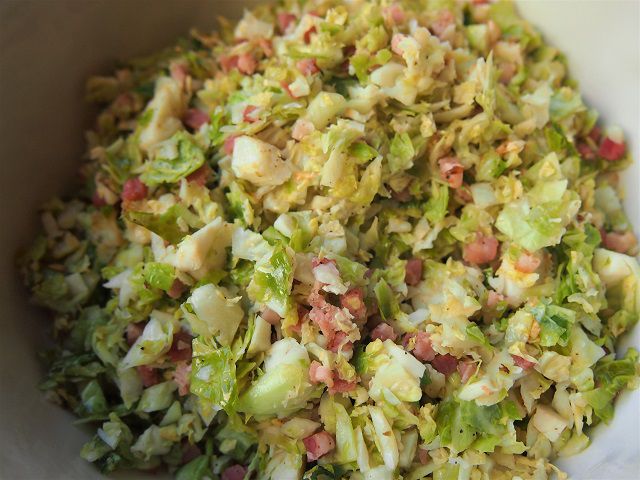 Remove the potatoes from the hot water, strain in a strainer for several minutes and then transfer the potatoes to several paper towels and squeeze out as much of the liquid as possible.  Place the potatoes in a large bowl and add the two eggs and almond meal along with some salt and pepper.  Add half of the cooked brussels sprouts to the potato mixture and mix with your hands.  Save the rest of the brussels sprouts for lunch with some smoked salmon!

Heat a large skillet to medium high heat with several tablespoons of avocado oil and heap about a 1/2 cup of the cake mix into the pan.  I cooked three at a time.  Using a spatula form each cake into a circle and press the mixture down with the spatula.  Cook for several minutes on each side until crispy and brown.  These cakes are excellent straight out of the skillet but also good the next day when re-heating in the oven under the broiler.