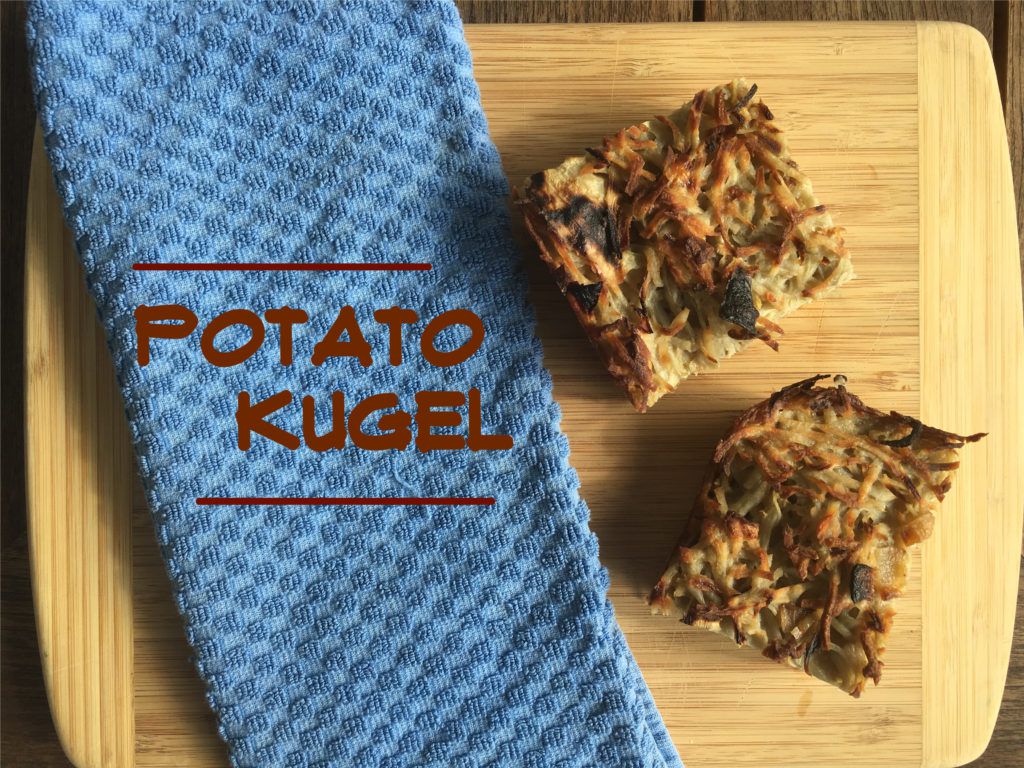 When Strudel suggested a potato-themed March, I wasn’t quite sure what do to with myself. My love of the tuber is powerful (never get in the way of me and french fries) but beyond a modified version of this lovely recipe (sub greek yogurt for sour cream,  onions instead of leeks, and add sautéed mushrooms), we don’t tend to do much with white potatoes in my house.

And then my childhood popped into my head – my dad went through a potato kugel phase, where he attempted to find the perfect recipe, and though the penultimate kugel evaded him during those years, we ate a heck of a lot of the potato casserole in the meanwhile. Remembering this the other day, I sent Dad a quick email to determine if he ever returned to the quest, and if so, what the results were. This was his response:

“I’m attaching a potato kugel recipe… the thing that makes potato kugel special is a gutsy texture and a pronounced taste of onion.  This recipe, because the potatoes become shards in the food processer, has a bold texture and, because onions are treated two ways (raw and caramelized) the kugel has a decidedly onion taste.”

(Can you totally tell my dad is a food writer?!)

This recipe is quite simple, the most time-consuming part is probably the most important – squeezing the water out of the shredded potato (and that took only about 10 minutes). It did take me a minute to find potato starch in my grocery store, but found it in the “Bob’s Red Mill” section – apparently potato starch acts similarly to cornstarch, but is gluten free.

We’re not sure where the recipe originated from – Dad didn’t note that – and I think it’s great as is. The only very minor tweak I made was to broil the top for a few minutes once the kugel was done baking, due to my love of a crusty lid.

Dice one of the onions and sauté until caramelized and golden.

Grate the remaining onion in the processor using the same grating bade you did for the potatoes, then pour the onion pulp and juices into the bowl with the potatoes (this keeps the potatoes from turning grey).

Carefully pour potato mixture into pan and bake for 20 minutes.

After 20 minutes, reduce heat to 400 degrees and bake for 40 minutes or until the top is a deep golden brown.

Remove from the oven and let sit for about 5 minutes before serving.

Posted on March 5, 2017
This entry was posted in side dish, vegetarian and tagged gluten free, potato, side dish.