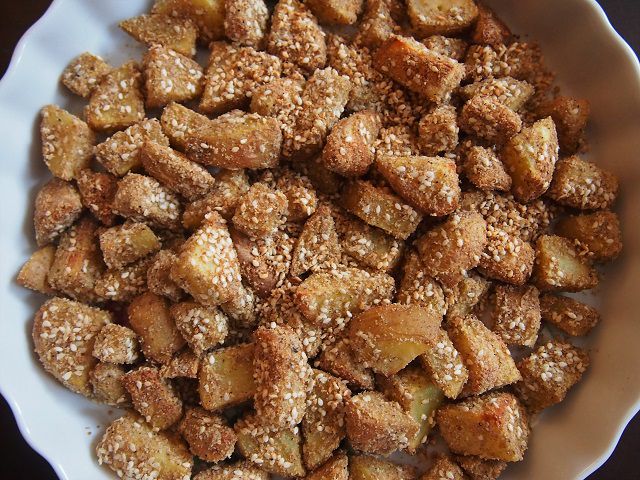 To finish out the month of cultural cuisine I had to share with all of you a wonderful discovery I made recently thanks to my Whole30 Cookbook.  There are many tasty recipes in this book but next to the Beef and Sweet Potato Chili (in which I substituted lamb) the dukkah-crusted brussels sprouts are amazingly good.

Nutty and crunchy, this blend can go on almost anything.  I put it on these gold potatoes and roasted them.  I’ve also put them on veggies and even cauliflower and chicken!  I have been searching for things I can’t put dukkah on!

The world wide web tells me that dukkah (not dukkha, that would be a term used in Buddhism for suffering, there’s no suffering with this season blend) is an Egyptian spice blend typically made with ground hazelnuts and used as a dip for bread!  It would be phenomenal with some fresh hot pita dipped in olive oil.

If you’d like to give dukkah a try, this is an easy recipe to start…

1 lb. of Brussel sprouts, cleaned, trimmed and split in half

1 onion peeled and sliced into chunks

adapted from The Whole30 Cookbook

Combine all ingredients together and store in an air tight container at room temperature.  Quite frankly, I don’t know how long it would stay fresh this way but if you’re like me you won’t ever know because once you taste this seasoning on roasted veggies you’ll use it up in one weekend like I did.

One Response to Dukkah