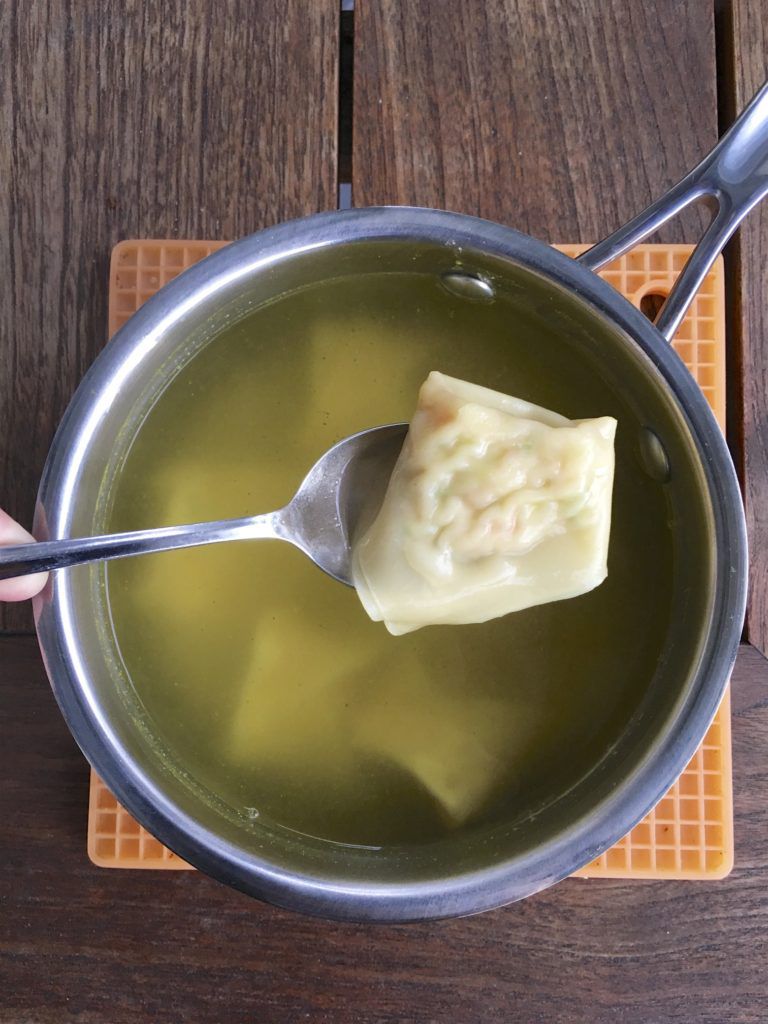 I spent much of my adolescence being moody; I’m sure it was mostly hormonal, and I’m even more certain that there was about 5-8 years where I wasn’t much fun to be around. I wore a lot of black with some occasional tie-dye, hippie skirts and definitely scarves in my hair. I also became a vegetarian at that time – and while I’ve managed to lose most of the ennui and have picked up better-fitting clothing, the vegetarianism stuck around for about 15ish years, at which point I started eating seafood again. Today folks would call me a “pescatarian” but that word wasn’t around back when my diet switched over. These days, I stick to saying I’m a vegetarian when it’s less fussy way to explain my dietary preferences, and go with “vegetarian that eats seafood” when it’s worth the time to get into it. I find anything short of that and people might think chicken broth is okay or just a hint of bacon isn’t worth mentioning.

It was a big deal for me to start eating seafood, and I did it because I just felt ready – I was getting a little bored with my diet and felt like there were things I was missing out on. There were specific foods I really missed – like sushi – and for me, it was just time.

Even thought it’s been a million years now that I started eating seafood, I still find that there are foods I loved but never really returned to. Wonton soup (from when I ate chicken) is one of those foods – and even though it’s possible to find shrimp wonton soup, it’s usually in chicken broth. So, when the glorious Deb from Smitten Kitchen posted an extremely adaptable and quick wonton soup recipe, all I had to do was sub out the ground chicken for shrimp and I was good to go!

Deb mentions this soup isn’t authentic, and since I don’t have anything to compare it to, I’ll take her word for it – but I’ll also say that it’s super delicious, very super flavorful, and comes together quite quickly. I made a batch and ate some for dinner and froze the rest, and it’s great for a quick snack or as part of my dinner. When I made it for dinner, I paired it with this main and a side of pan-seared zucchini, and it was perfect.

And another note regarding this recipe – the only thing that take a moment to figure out is how to fold the wontons – rather than include written instructions, here’s a photo illustration: 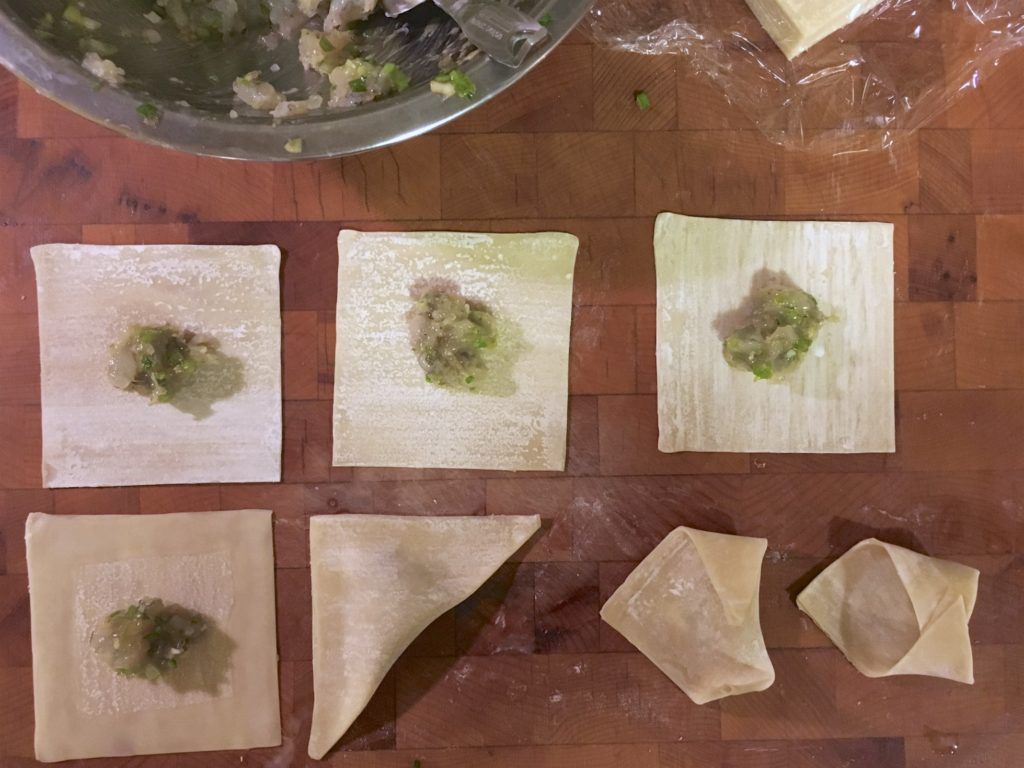 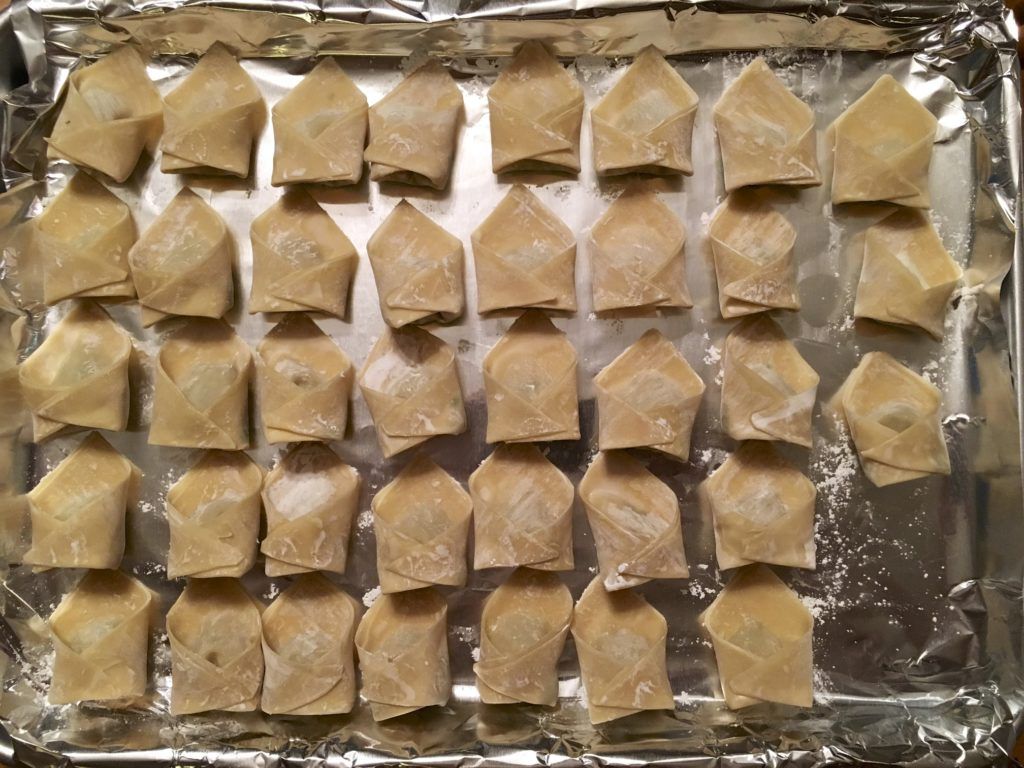 a slight adaptation from from Smitten Kitchen

50 wonton wrappers (about 12 ounces), thawed if frozen, thinnest ones you can find

Make your filling: Combine chicken, soy sauce, salt, sesame oil, ginger, chives and pepper in a bowl with a fork (note: to be super fast, do this in a food processor – chopping shrimp with a knife is a pain). If you’d like to test for seasoning, put a tiny dab in a microwave-safe bowl or plate and cook for 10 very splattery seconds. Adjust flavors as desired.

Form your wontons: Place a few wontons wrappers on your counter. Cover the remaining ones with a piece of plastic wrap. Place 1 heaped teaspoon (from a measuring spoon set) in the center. Use your fingers dipped in water to dampen the edges. Fold one corner diagonally across to the other, pressing air out as you seal it shut. Then, bring the two corners on the wide side of the triangle down below it and use a dab of water to seal them shut. Repeat with remaining wontons.

Cook the wontons: Once your wontons are formed, you can cook them right in the simmering broth or you can do so in simmering water — the latter is better so that the cornstarch on the wrappers doesn’t make the soup cloudy. Boil wontons for 3 minutes to cook them inside; this is really all it takes, but if you’re nervous, cut one in half to make sure.

To finish soup: Add spinach to simmering broth and let cook for one minute, until softened. Add cooked wontons to broth and let them warm through again for 30 seconds. Ladle wontons and soup into bowls.

Do ahead: Wontons can be formed and refrigerated for a day, or frozen for a month or longer.

Posted on January 22, 2017
This entry was posted in healthy, quick and easy, soup and tagged healthy, shrimp, soup, wonton.

One Response to Shrimp Wonton Soup