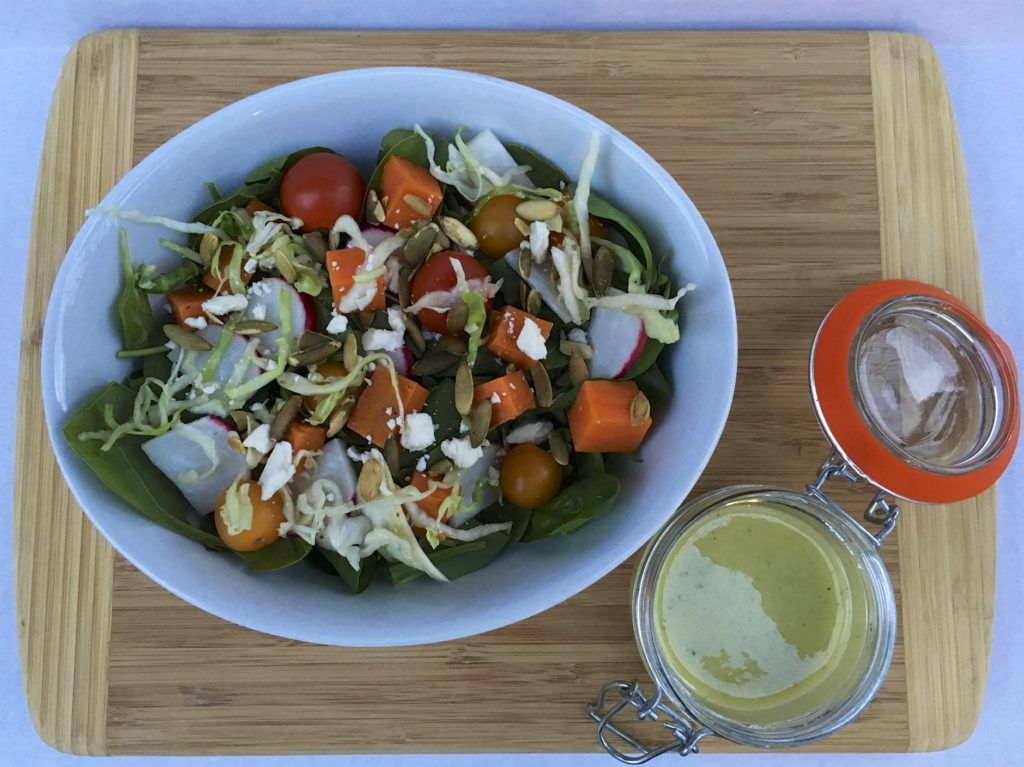 I was fortunate enough to travel in France in October, and after nearly two weeks of butter, pastries, and coffee, we hauled ourself on a discount flight back to Seattle on Iceland Airlines. The flight was very inexpensive – for which we were extremely grateful for – and absolutely no-frills. It was a long flight and we weren’t able to pack food ahead of time, so had to pay for an airplane meal.

Besides junk food and Icelandic yogurt, they only vegetarian option was this salad. I was a little grumpy about eating a salad (very possibly a withdrawal reaction to the lack of butter or bread in this meal) – but, surprisingly, it ended up being *delicious* and filling (not my usual expectation of an airplane meal). It was so good, in fact, that I took a photo of the ingredient list so that I could re-create the salad at home.

Three things in particular made this salad so great: it was a little spicy, a little pickled, and a little sweet. So much good stuff! With December being healthy lunch month here at S&S, and now that my various medical complaints have healed, this seemed the perfect time to do some salad experimentation.

I did tweak the recipe some, adding in a few ingredients. I’m also pretty sure my dressing isn’t quite the same as theirs, but it’s still tangy and a bit spicy, which is what I was after.

With some (easy) prep done ahead of time, this comes together very quickly. To make pickled cabbage, I used this recipe from the amazing Smitten Kitchen, though I used pre-shredded cabbage from Trader Joe’s (lazy) and didn’t include any of the other veggies. Earlier this week, I had roasted a few sweet potatoes, whole, at 425 degrees for about 45 minutes. I just cubed 1/2 of one for this recipe; alternatively, the potatoes can obviously instead be cut first, then roasted, to prep for this recipe.