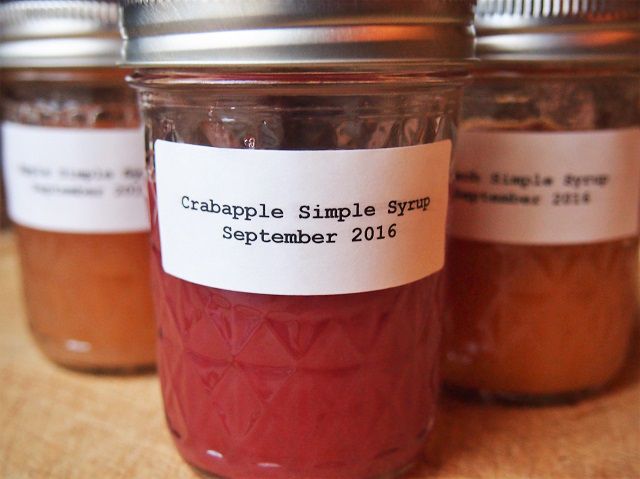 I am so excited that it’s homemade gift month here at S & S.  Hanukkah and Christmas are right around the corner and I know I love getting thoughtful homemade gifts.  You?

Pressure cookers make life easy, you might remember when I made homegrown roma tomato sauce with my pressure cooker.  You might also remember when I had tons of crabapples in September.  With all of the crabapples that I didn’t feel like coring,  I dumped them in my 6 quart pressure cooker (about a pound of them), covered them with water and experimented with cooking them.  It was a successful experiment!  So successful I repeated the experiment with apples from my friend Heather’s apple tree as well as Palisade Peaches!

makes as much as you want!

sugar (optional, depending on fruit)

Fill your pressure cooker no more than half full with the prepared fruit and then cover fruit with water.  Turn the stove burner on high and seal the pressure cooker accordingly.  Once cooker reaches pressure, cook fruit for 5 minutes.  Then remove the cooker from direct heat and let it release pressure on its own.  Once the pressure is down, open the cooker (the crabapples and apples looked obliterated but the peaches were still intact – I mashed them with a potato masher) and let cool slightly.

Strain the juice into a pot through a strainer to catch the skin and pulp of the fruit.  I used a ladle to squish the remaining juice out of the pulp.  Bring the juice to a boil (to the crabapple juice I added 1/2 c. sugar) uncovered and let boil on a rolling boil until liquid is reduced to half.  This took about 30 to 40 minutes for me at high altitude.  Let cool and distribute between as many clean canning jars as necessary.  Seal each jar with the lid and ring.

Bring a large pot, with enough water to completely cover the canning jars, to a boil and add the jars with tongs into the boiling water and let boil for 15 minutes.  Carefully remove the hot jars with the tongs and place on a clean towel.  Once cooled, the button on each lid should be compressed.  Label with a cute label and store at room temperature.

What do you use simple syrup for, you ask?

I mixed mine with vodka and club soda (yumm, yumm!) and I also mixed mine with oil and a little balsamic vinegar and salt and pepper to make a zesty vinaigrette!  Wrap in pretty paper with a bottle of vodka and an instruction card for making a unique cocktail gift!