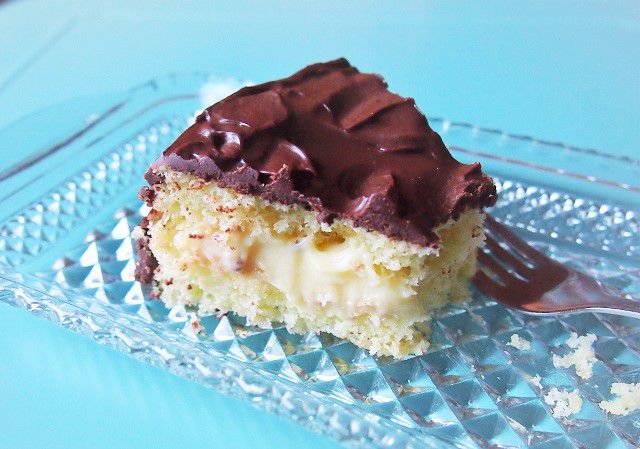 When Strudel and I decided to make Classic Desserts this month, I struggled with what to make first.  I knew I wanted it to be something I had never made before but always wanted to…Boston Cream Pie came to mind.

This pie, or cake, was first made at the Parker House Hotel in Boston, the longest continuously operating hotel in the US!  The way I see it, that makes this dessert a true classic!  This delight dates back to the mid 1800s.  It is even the official dessert of Massachusetts. 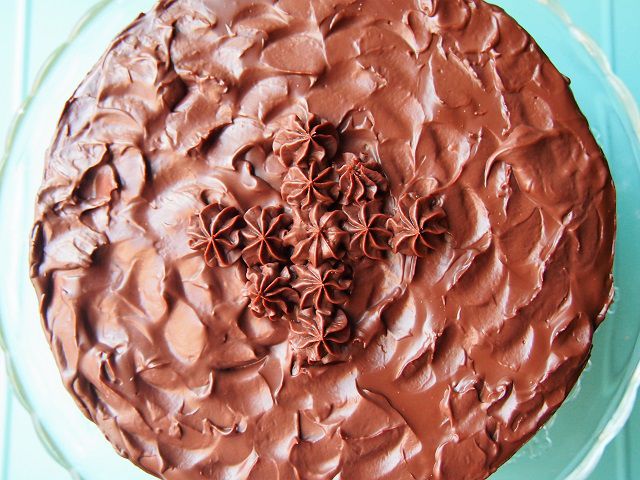 I scoured the internet for recipes but then I realized I rely on google too much for inspiration.  It was time to dust off my first source of inspiration – The Joy of Cooking!  This recipe turned out beautifully and I was so glad I turned to my good ole standby cookbook.  I made one modification, I used a chocolate ganache for the topping instead of the chocolate glaze called for in the book (both recipes are in this book though).  This pie has three steps; making the cake, making the pastry cream and finally making the chocolate topping.

This cake might seem a bit time consuming but while the cake is baking, make the pastry cream and have it cooling in the fridge.  Be sure to wait and make the ganache last though as it sets up quickly.  This dessert is worth the extra effort.  Make it for dinner guests to delight and impress!

This cake is super easy to whip up and bakes to a nice sponge consistency.  Sift the flour and baking powder together three times and return to the sifter.  Heat the milk and butter in a small saucepan until the butter is just melted and set aside.  Beat the eggs and sugar together until light-colored and triple in volume.  I whipped mine in my stand mixer with the whip attachment.  It took about 5 minutes for the volume to triple.

Sift the flour into the egg mixture and gently fold in.  Then fold in the hot milk.  Split the batter between two circular cake pans (9 inch in diameter) that have been buttered and floured generously.  Bake at 350 degrees Fahrenheit for about 18 to 20 minutes or until golden brown and set in the middle.

I chose to make two separate cakes instead of making one thicker cake and slicing it in half horizontally (because I’m not as good at that as just baking two cakes).  Let the cakes cool in their pans on a cooling rack until completely cooled.  Slide a knife around the edge of the first cake in the pan and gently turn the pan upside down onto the serving dish.  Leave the other cake in its pan until ready to place on top of the pastry cream layer.

Beat the egg yolks, sugar, corn starch and flour on high-speed for several minutes in a mixer until a smooth, thick, pale yellow paste forms.  Warm the milk until simmering in a medium saucepan, remove from the heat and add in the vanilla extract.  While the mixer is running, slowly add the simmering milk to the egg mixture.  Scrape the entire mixture back into the saucepan and, whisking continuously, heat to medium heat for several minutes or until the custard thickens.

Scrape the custard into a bowl and place plastic wrap directly onto the custard and up the sides of the bowl to prevent the custard from forming a skin.  Let cool completely for about an hour in the refrigerator.  Spoon the custard onto the bottom cake layer and spread evenly on the entire later.

Remove the second cake from the pan by sliding a knife around the edge of the pan and carefully invert the cake pan, tapping it to remove it from the pan and place it on the cake with the pastry cream.  Now make the ganache!

Heat the cream in a small saucepan just until it starts to boil, remove from the heat and add in the chocolate.  Stir until most of the chocolate is melted, let sit for 10 minutes covered and then whisk until smooth.  Stir in 1/2 t. vanilla or other desired extract.  Cool to room temperature and then pour the ganache over the cake.  Spread evenly over the top and let drip down the sides.  Smooth with an off set spatula and add pretty designs or just pour it on and let it sit until firm.

Either way this pie tastes fabulous and doesn’t stick around long enough for people to notice any pretty decorating!

One Response to Boston Cream Pie