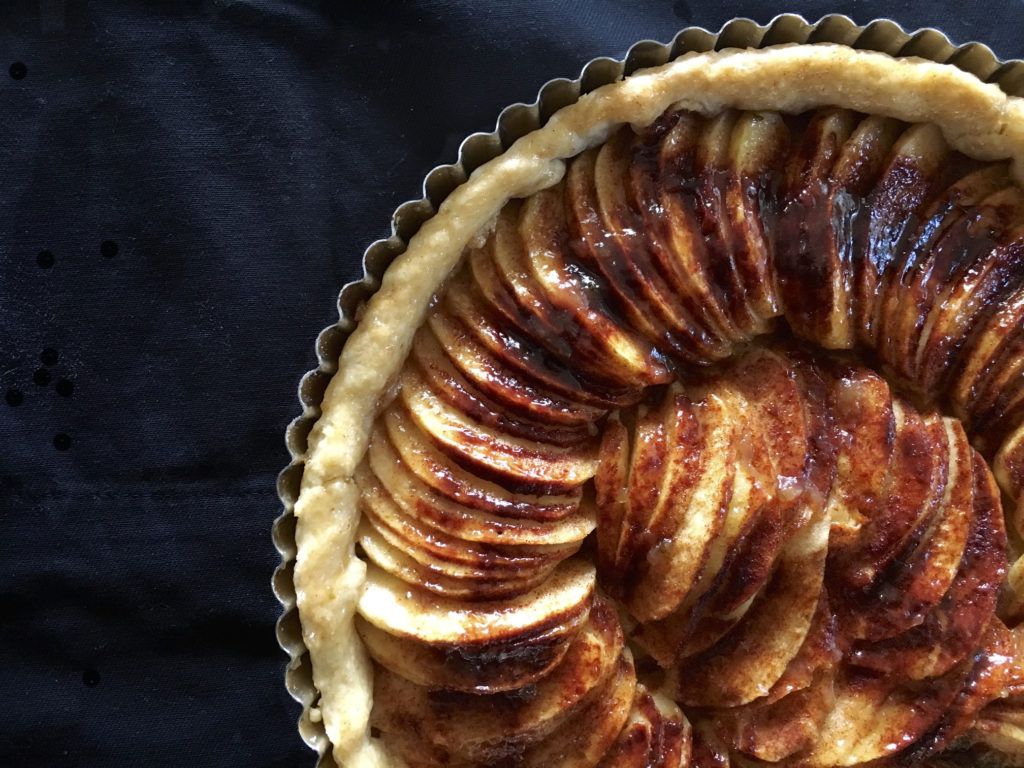 This July brings “classic desserts” month here to S&S – meaning that Streusel and I have every excuse we’ve ever needed to spend the month baking our favorite desserts. This was perfect for me, as I was gifted this recipe a few years ago, and have been meaning to bake it forever, but have somehow never gotten around to it.

This Apple Tart was came to me by way of my dad, but it originates from his wife’s (hi Jacqueline!) mother, Arlene. The way dad described the tart was that “the look is very impressive and the taste is sweet tart. Which means you can’t stop eating it.” He also mentioned it is quite simple to make, and since I don’t have a ton of experience with tarts, it seemed like a great time to try it out for the blog. Also, Brandon is sleeping off the night shift today, so I needed to bake something quietly – while I understand that silent baking isn’t every baker’s demand, this was an extra “pro” for this recipe, as far as I’m concerned. With the exception of some food processing in the basement (grating butter in the cuisinart is quite loud), I can attest to the delicious simplicity of this lovely dessert!

(ps. we’re right on the cusp of the 4th of July holiday – this is a *perfect* dessert to bring to an event!)

I altered the original recipe based off of what I had in my kitchen, those notes are in the bullet point list below, but I’ve typed up the original recipe down below. The tart comes together quickly, and once you’ve made it a few times, I bet it gets even speedier.

Here’s some photos of the steps for filling the crust:

Peel, core, then slice your apples thinly – try for about 1/4” thick to ensure your tart is looking it’s loveliest. 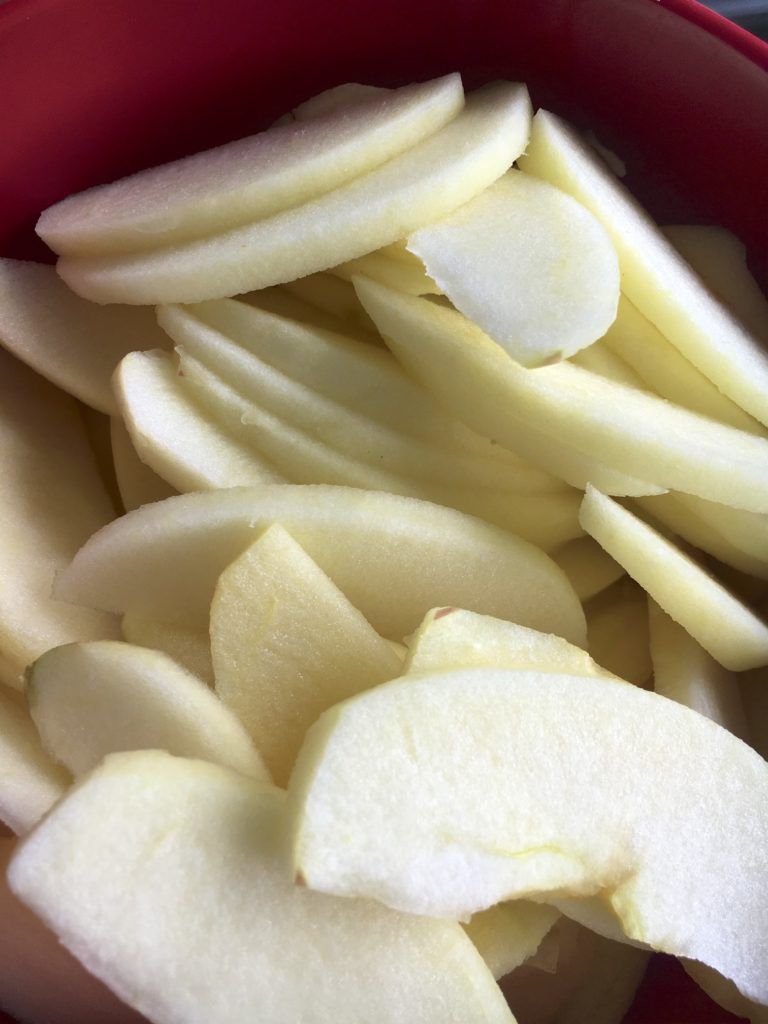 After you make and roll out your dough, place in to tart pan (the dough has plenty of butter, so it’s easy to work with). Prick the tart dough with a fork.

Arrange apples in a circular pattern in the tart pan. 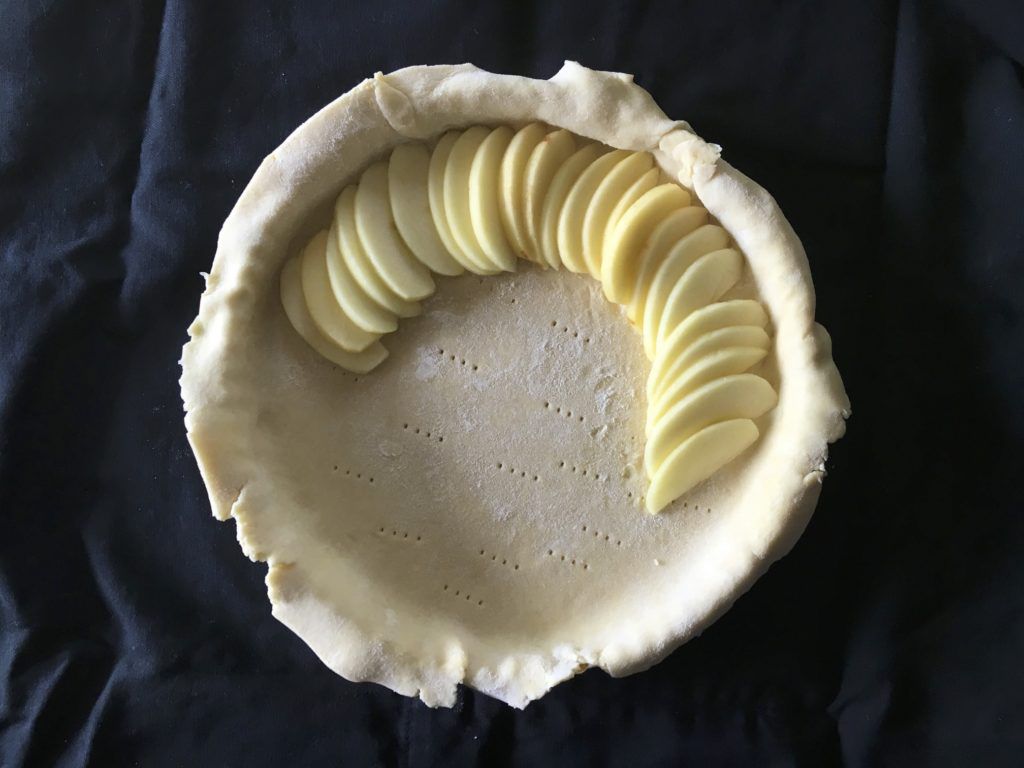 In a larger pan, I bet you can get two rows of apples in, if they’re not as tightly packed. 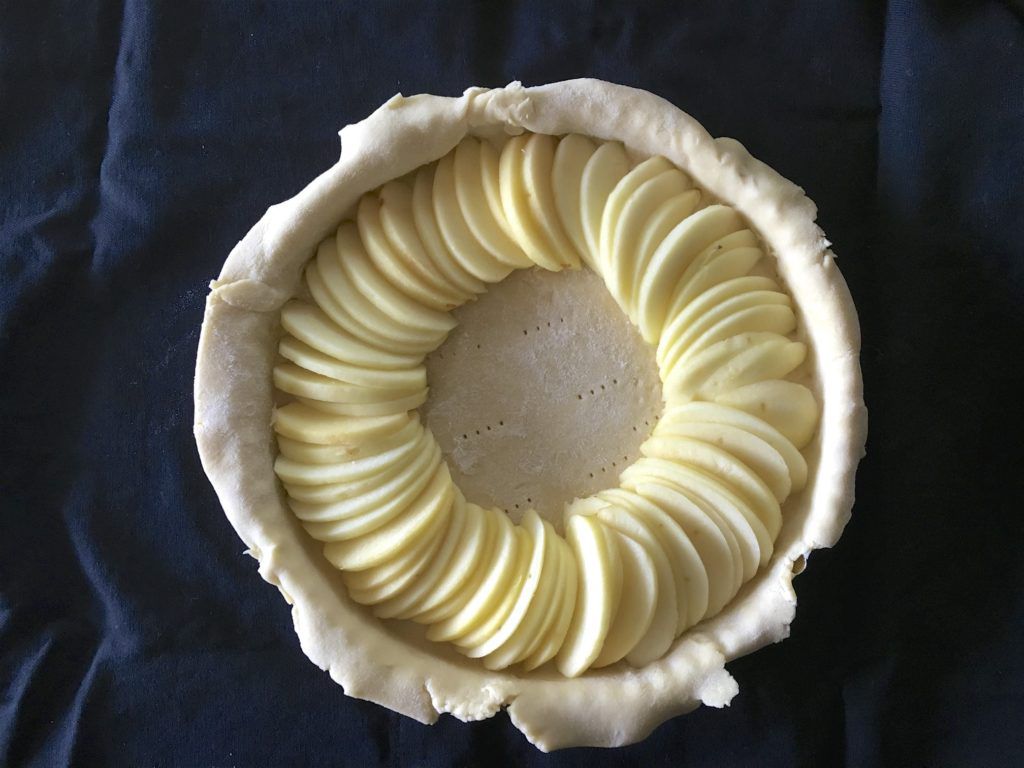 Fill in the center. 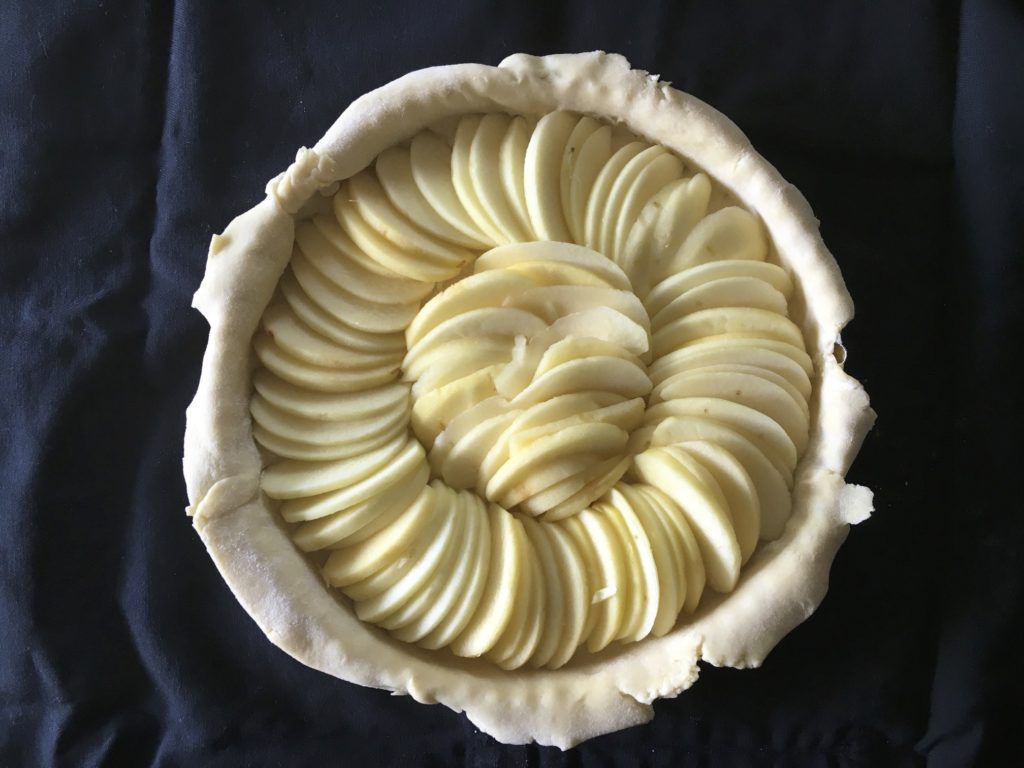 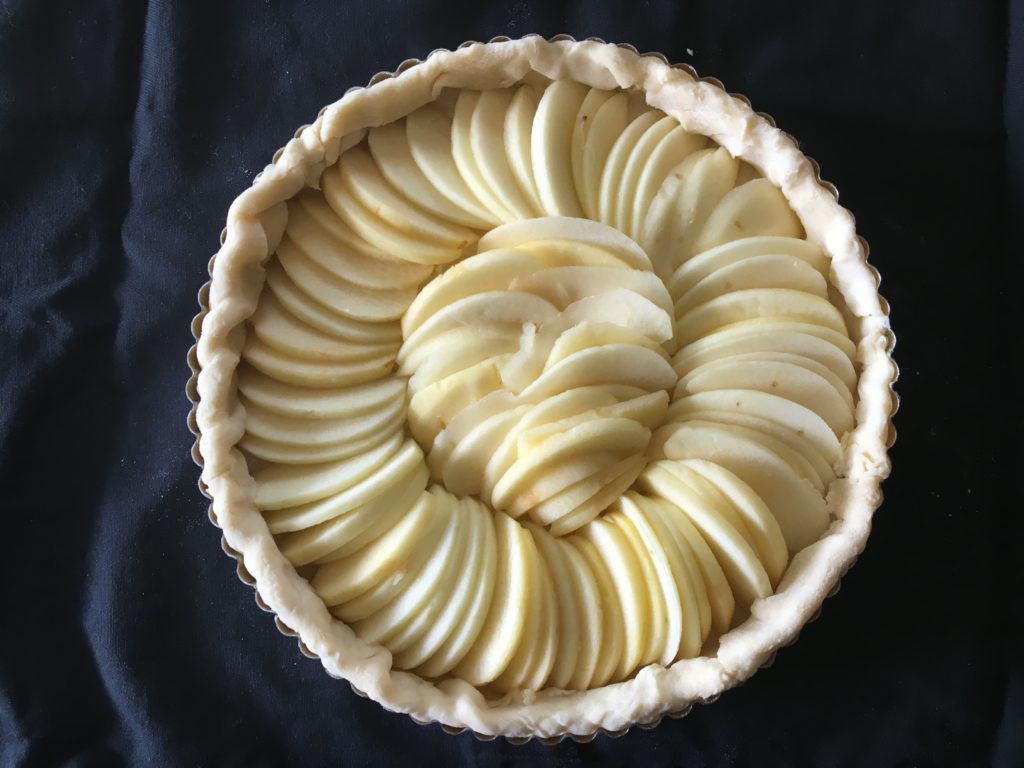 Sprinkle with cinnamon and sugar mixture 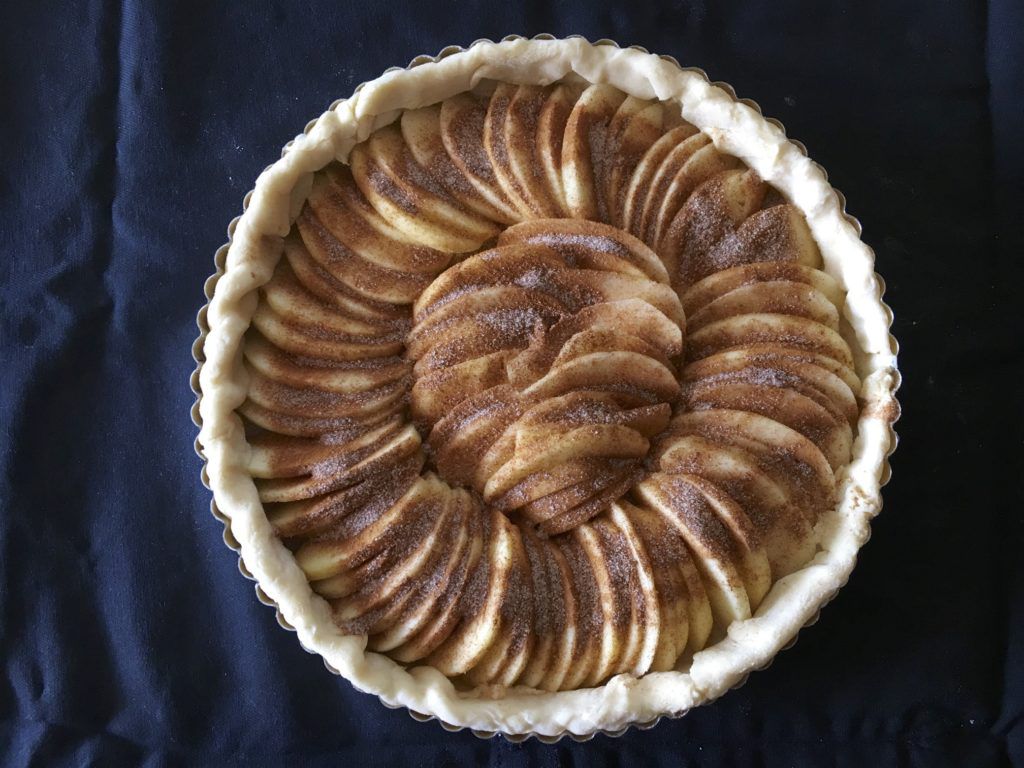 And bake for about 40 minutes – you’ll baste the tart with butter about 1/2 way through the cooking time. 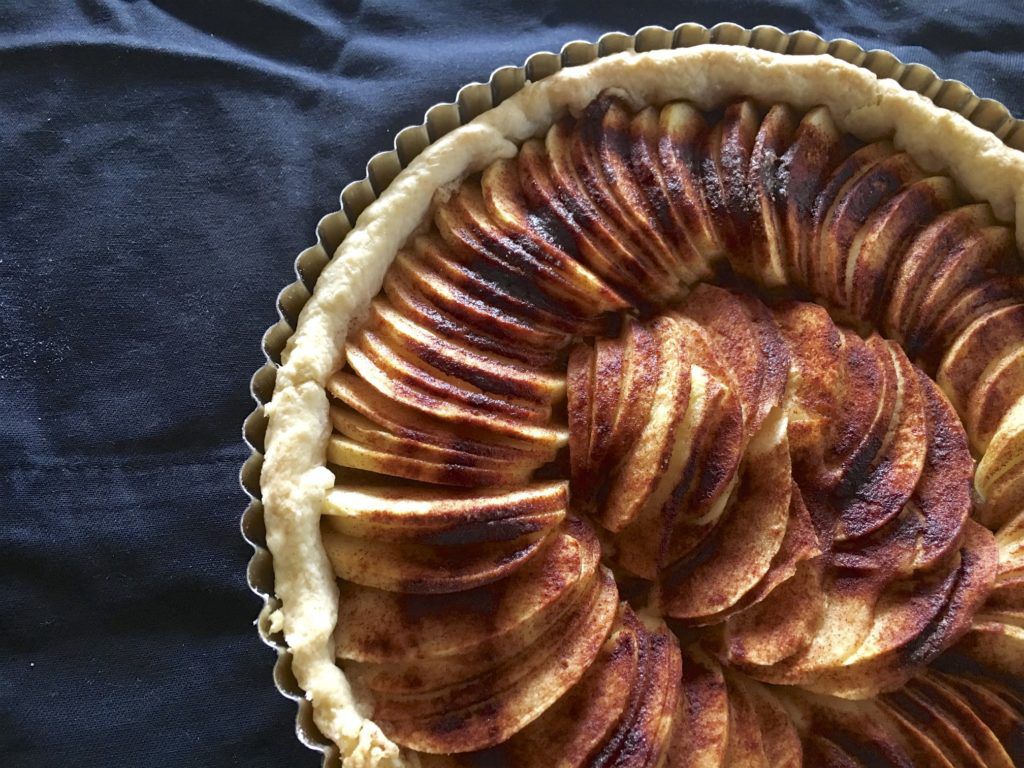 When it’s done, remove from oven and brush tart and crust with warm jam! 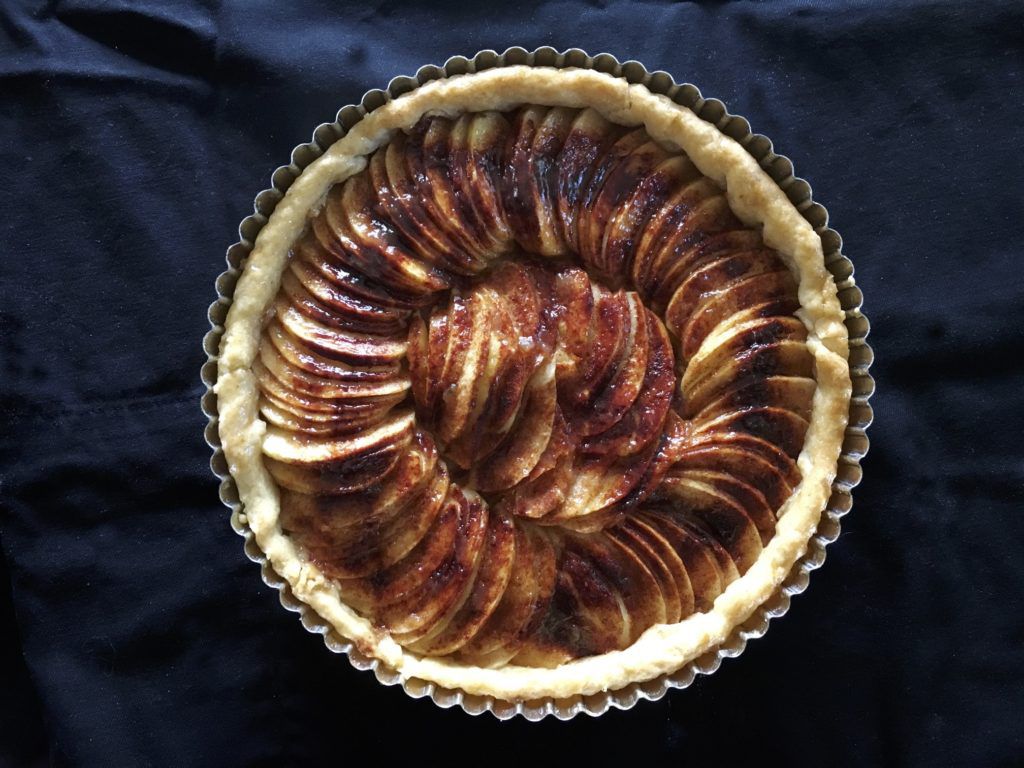 Add butter, flour, sugar, and salt to a food processor and mix until the consistency of coarse meal. With the processor running, add cold water in a steady stream. Stop processing when a ball is formed (may take a minute, just keep the processor running – add a little extra water if necessary).

Turn on to plastic wrap, and shape and flatten in to a disk. Refrigerate or use immediately.

On a lightly floured cutting board, roll out the dough and place in to tart pan. You’ll want the crust to be slightly larger than the pan, so that the dough overhangs the sides a bit. Prick the bottom with a fork, and refrigerate until ready.

Arrange apples in a circular patter in the tart pan. Fold the edges of the crust inward, so they cover the outer edges of the apples. Mix together the sugar and cinnamon, then sprinkle over the apples.

Remove from oven when lightly browned. Microwave jam until it’s warm and running, and again using the pastry brush, brush jam over the tart, including the exposed crust.

Cool on cooling rack. Keeps well for several days at room temp, but is best the day it’s made.