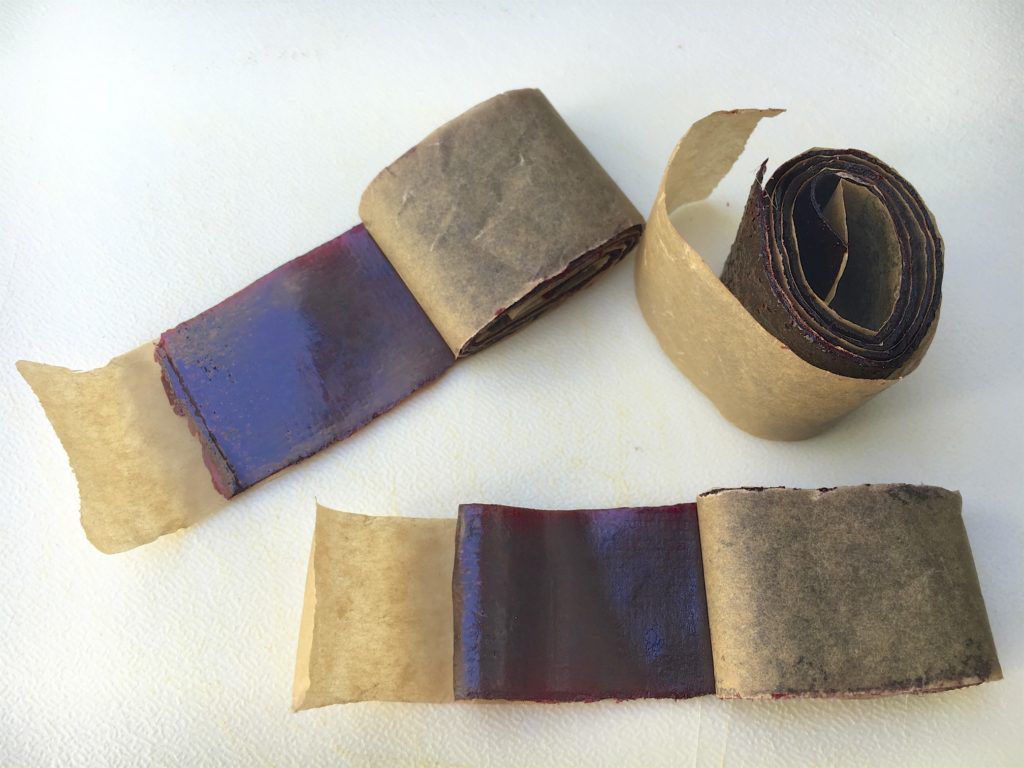 You know that Seinfeld where George’s girlfriend tells him that “I find the pastrami to the be most sensual of all the salted, cured meats”? I had a total flashback to that episode when I told Brandon that I was considering making cherry leather; he grew up having hippie foods unknowingly slipped into his meals (which included some troubling run-ins with carob) and is suspicious of foods that remind him of this part of his childhood. However, when I told him of my plans, he said, “You know, cherry leather is my favorite of all the fruit leathers…”

Stresuel and I have decided that the most appropriate way to celebrate June here on S&S is to make it a cherry-themed month (full disclosure: the boozy cherries I’ll post later this month was the real impetus). I love fruit leather but never eat it – too expensive and filled with sugar. Plus, I don’t have a food dehydrator. AND THEN I discovered I didn’t need a dehydrator – just a cherry pitter, an oven and a few hours at home.

There’s a bunch of recipes out there for fruit leather, I combined a few to come up with the following. And full disclosure: it took longer to dry than I thought it would, and I had to leave the house. I ended up turning off the oven (before the leather had fully dried) and leaving the fruit leather in the oven overnight. The next morning, I took the pan out, pre-heated the oven again, put it back in the oven and continued baking at the same temperature. It turned out perfectly!

Also – I splurged on a $6 pitter that was totally worth my money, it made the job must faster and easier.

Preheat oven to 200 degrees, and line a rimmed baking sheet with a silpat or parchment paper.

In a medium saucepan, bring the cherries and 1/3 cup water to a boil. Simmer for about 10 minutes, until the cherries begin to soften. Remove from heat and puree, either transferring to a standard blender or in the saucepan with an immersion blender.

Return the fruit puree to the pot and bring to a low boil over medium heat, stirring frequently (or constantly) until the puree thickens, about 20 minutes. Add sugar and stir to dissolve.

Pour the puree onto the baking sheet and smooth out with an offset spatula. Place into oven, and dry until fruit is tacky to the touch, about 3-4 hours. Remove from oven and fully cool, then remove silat from the baking sheet. Press parchment or wax paper onto the fruit leather, and flip, so that you can peel off the silpat. Roll up parchment, then cut into 1-2” slices. Tape off ends, and store in a covered container.