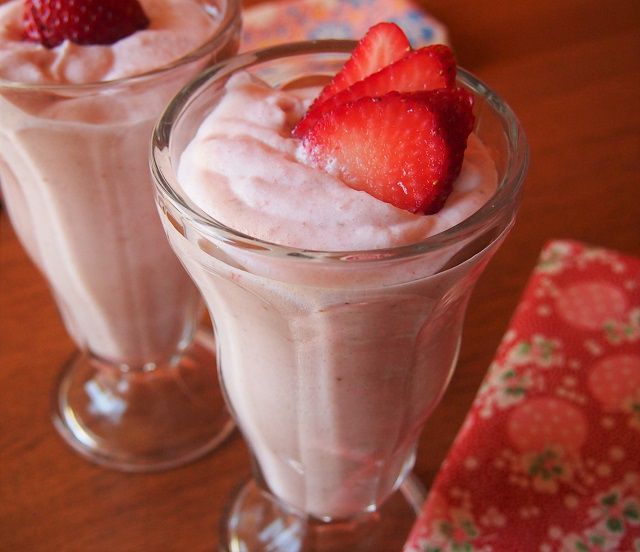 This is an easy and fluffy strawberry mousse, perfect for this weekend’s celebrations!  Let’s officially kick off this first unofficial weekend of summer with something full of strawberry flavor.  This recipe is easy but let me warn you, it uses about a million dishes and requires fine tuned multi-tasking skills to pull it off easily!  That’s why there’s only one picture in this post, there was no room for picture-taking with things boiling on the stove and things whipping in my stand mixer!  It only took about 20 minutes to make and then it was quickly put away in the refrigerator so it was worth all the dishes!

Combine the halved strawberries and 1 T. sugar in a blender and let sit for 5 minutes before blending until smooth, set aside.  Sprinkle the gelatin on top of 3 T. of water in a small bowl and set aside until the gelatin has absorbed the water.  Combine the 1/2 c. sugar and the 2 T.  water into a small saucepan and boil until a candy thermometer reaches 200 degrees Fahrenheit (210 to 215 degrees if at sea level), this took about 5 minutes.  Set aside to cool slightly.

While the sugar syrup was boiling, I whipped the whipping cream for several minutes using my stand mixer with the whisk attachment and whisked on high-speed until soft peaks formed.  Once whipped I placed the cream in a new bowl and wiped the stand mixer bowl clean for the next step.  Beat the 4 egg whites with the gelatin mixture and 1 T. of remaining sugar until soft peaks form.

With a large rubber spatula slowly fold the whipped cream into the egg white mixture and then fold in the blended strawberries.  Distribute the mousse between 6 glass dishes and refrigerate for at least an hour before serving.  I served these the following day topped with fresh sliced strawberries.

Posted on May 28, 2016
This entry was posted in brunch, desserts, quick and easy and tagged egg whites, gelatin, Strawberry Mousse, whipping cream.

One Response to Strawberry Mousse