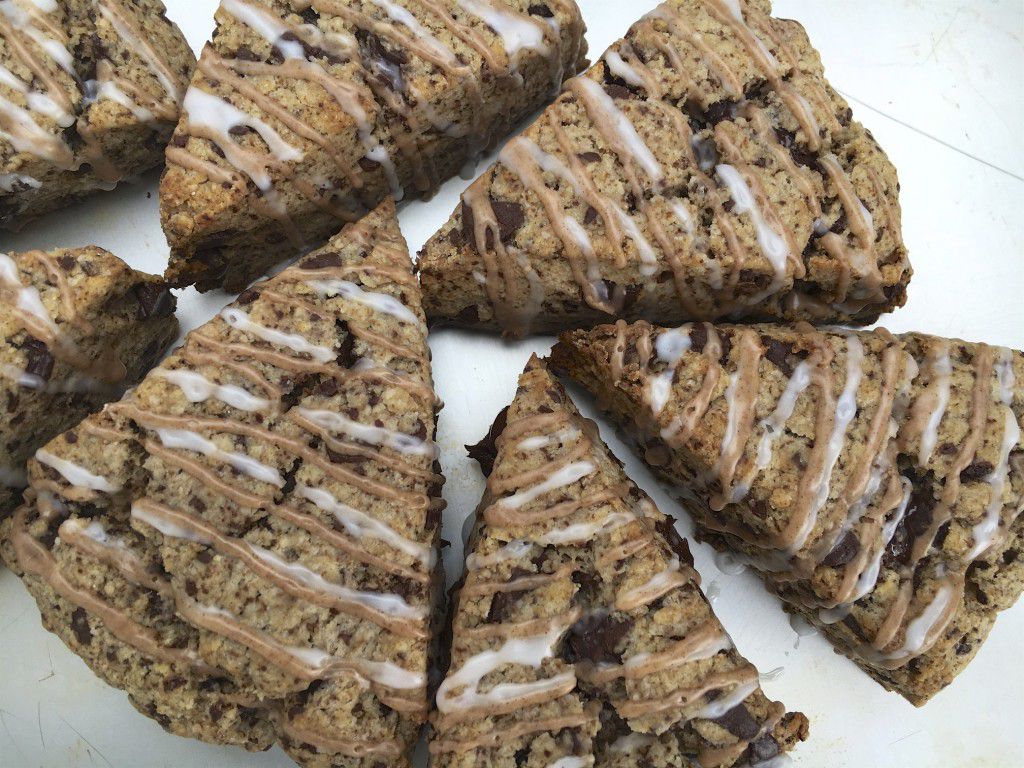 It would seem that I’m using this month’s theme as an excuse to eat chocolate at breakfast, While I’m a little surprised – I *do* try to be a healthy eater – as a social worker, I’ve learned that sometimes you have to look beyond what people say (“I’m a healthy eater”) and instead look at their behaviors (2 of my 3 posts this month involve eating chocolate at breakfast).

In my defense, these scones are really good. I used a trusted and loved simple scone recipe, edited to meet my needs. Because the scone base itself doesn’t have much sugar, the espresso flavor stands out, and the scones don’t become overly sweet with the addition of the dark chocolate. There are two glazes – plain and cinnamon – because why wouldn’t we?

I know that making two glazes sounds like a pain, but it’s actually barely any work, since you can use the same mixing bowls without cleaning in between. This recipe can be made, baked and eaten within an hour.

– I always use fat-free greek yogurt instead of sour cream, since we almost always have it on hand (once – desperate to avoid leaving my house – I immersion-blended some cottage cheese and subbed the for the greek yogurt, and that worked too)

– the chocolate chunks can/should be cut into fairly large pieces; they’ll get chopped up even more when they are mixed in the Cuisinart. I’m sure sure that chocolate chips can be very easily subbed, just keep in mind they may get chopped pretty small

– when the batter is finished mixing, don’t be concerned that it doesn’t all come together. Once you dump it onto the counter top, just mush it together with your hands

– the directions below are how to make the scones with a cuisinart. If you don’t own a food processor, then follow these directions, being sure to add in the chocolate chunks and espresso powder as directed below. It’ll take a few minutes longer but is still plenty easy 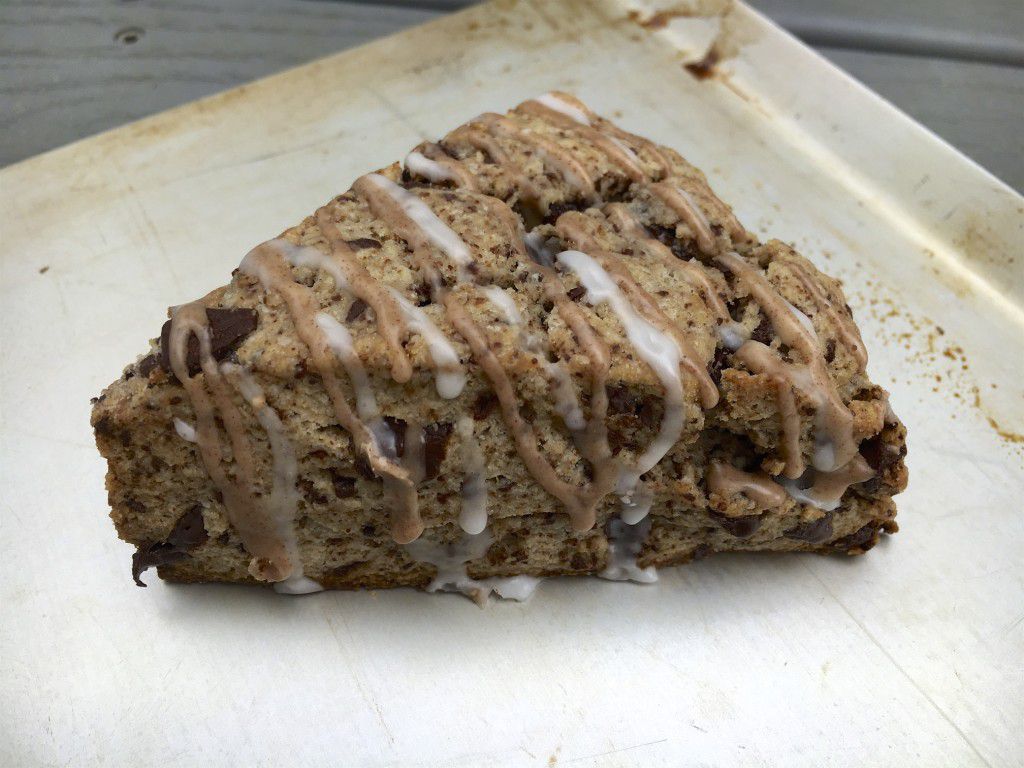 In the bowl of a Cuisinart, grate the stick of butter. Pour grated butter into a small bowl and set aside (make sure you scrape out all – or almost all – of the butter).

In a small bowl, whisk sour cream and egg until smooth. Add the wet ingredients to the Cuisinart, and pulse again a few times until the batter starts to clump (it won’t come together much). Dump batter onto a lightly floured surface, and use your hands to press the dough together in to a 7-8 inch disk. Have faith – the dough will be sticky in places, and there may not seem to be enough liquid at first, but as you press, it will come together.

Use a sharp knife to cut into 8 triangles; place on baking sheet. Bake until slightly brown around edges, about 15 to 17 minutes. Cool on baking sheet for 5 minutes, then transfer to a cooling rack while you make the icings.

Drizzle both icings on top of the scones, as you like, and allow to sit for a few minutes to allow the icings to harden. Serve, and enjoy!

One Response to Espresso Chocolate Chunk Scones with Cinnamon Glaze