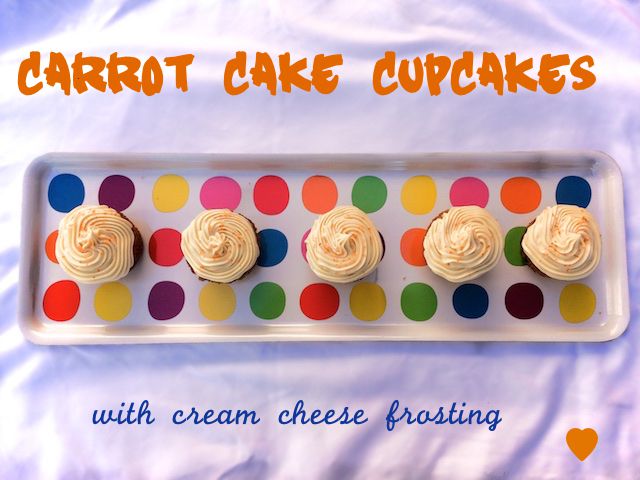 I’ve been mulling over what to make for the last installment of cake month here at Strudel and Streusel… lots of ideas have been floating around in my brain, but everything was either too fancy (I’ve been feeling pretty lazy lately) or uninspired (I attempted a single-serving mug cake and it was a disaster; I won’t return to that for a while).

And then, seriously, I had a dream about carrot cake cupcakes. I have no idea why – I don’t think that during my conscious hours I’ve been thinking about cupcakes or carrots much (at least, not more than usual). But I took that as an (extremely helpful!) sign that my dream should be my inspiration for this week’s post (as an aside, I don’t remember any context of the dream – which is probably a good thing, since hearing about people’s dreams usually isn’t very interesting…)

Since I remain hyper aware that summer is creeping toward us, I made these cupcakes low-fat… and then I added the frosting. So we won’t call them healthy or low-fat, but we will acknowledge their attempt at balance, with the lower fat cake and the higher fat frosting.

It’s a simple recipe that comes together quickly. The cupcakes themselves are super moist and tasty. They don’t rise a ton, but when the tops look dry you’ll know they’re just about fully baked.

In a large mixing bowl, whisk together the flour, baking soda, and spices. Set aside

In the bowl of a standing mixer, beat the both sugars, oil, applesauce, eggs, and vanilla.

Pour batter into muffin tins, filling until about 2/3 full. Bake at 350 for 35-40 minutes. They’ll be done when a toothpick inserted into a cupcake comes out dry, or with only a few moist crumbs attached. Let cool in the pans for about 10 minutes, then remove to a wire rack to cool completely. Frost generously.

In the bowl of a standing mixer, beat together the cream cheese and butter until fully incorporated. Add in powdered sugar, 1 cup at a time, then incorporate vanilla. Slowly mix in milk and beat to desired consistency (slightly more or less milk may be necessary).