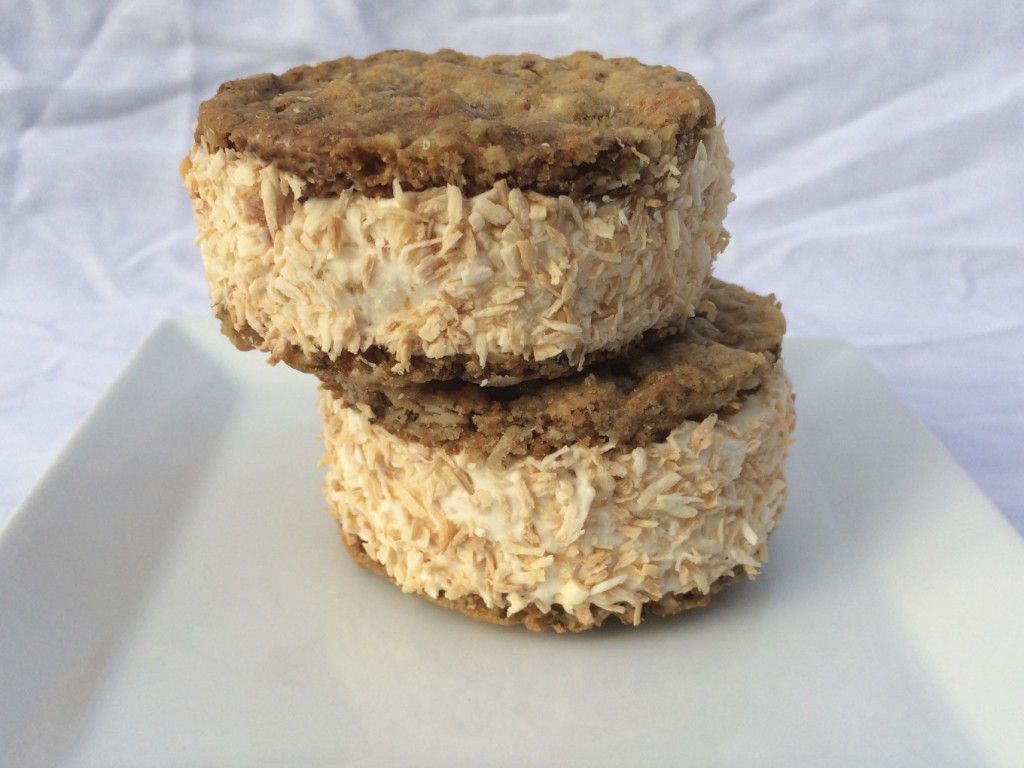 Many moons ago, I was a Girl Scout – I had the sash, I went to the camp, I made the crafts. And of course, I sold GSCs (Girl Scout Cookies). I remember when my mother was in Law School, she agreed to help me out with selling cookies. She took the order form with her to school for a few days, pinning to a bulletin board in a common area so that people could write in their own orders. I sold about a million boxes that year (BTW, I totally recognize that this was cheating). In the years after that, I went door-to-door with a friend. It’s so weird to think back on that time, where a couple of 11 year-olds went out – without any adults – to stranger’s houses, selling stuff, collecting their cash, and leaving with promises to return with their product. ‘Twas a different time.

And now!  As a food blogger, food lover, and self-described cookie connoisseur, my palate (which has matured) still loves the GSC. When we were contacted by the Girl Scouts of Western Washington to enter a recipe contest celebrating the 40th birthday of the Samoa, I can honestly say that I’ve never seen Streusel so enthusiastic – she emailed and said, “This contest and my birthday coincide this year! Samoas are my favorite! It’s meant to be!” Who can resist that excitement?!

I will forever love GSCs not just because they’re tasty, but also because it’s pretty amazing to see the institution of Girl Scouts carry on – both of my nieces, Maddie and Sasha, have both been involved with Girl Scouts. I love the annual cookie-selling phone call, where I order way more cookies than I’ll ever need. 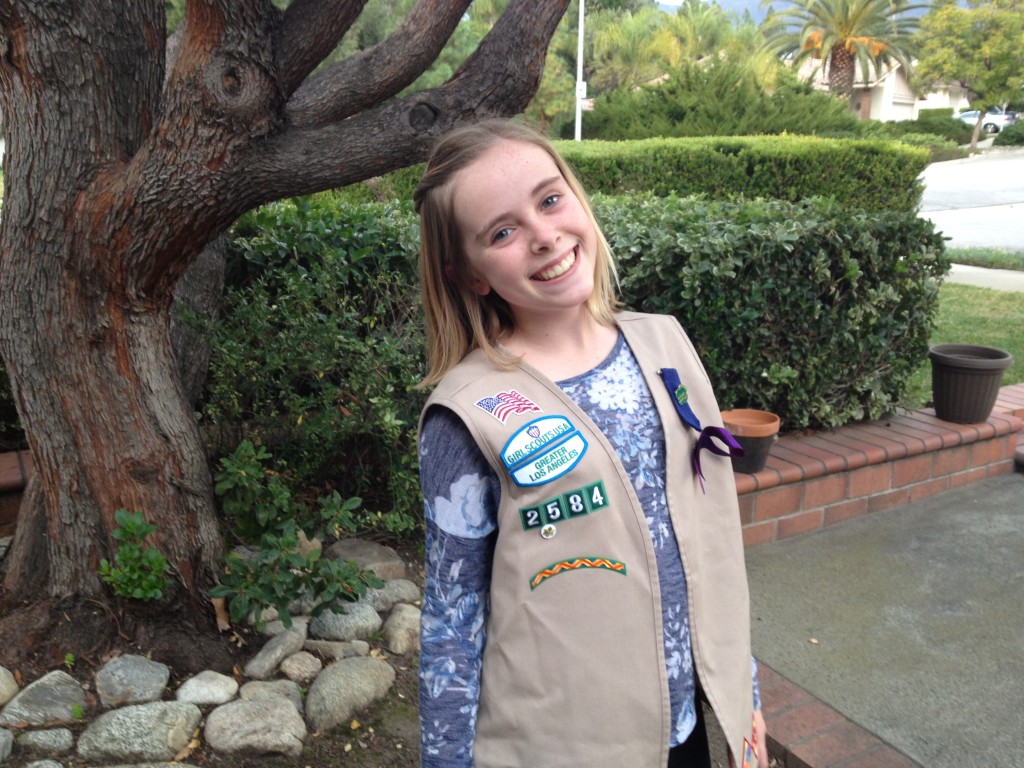 And here’s my other niece, Sasha – in her signature style – selling cookies in Denver last year: 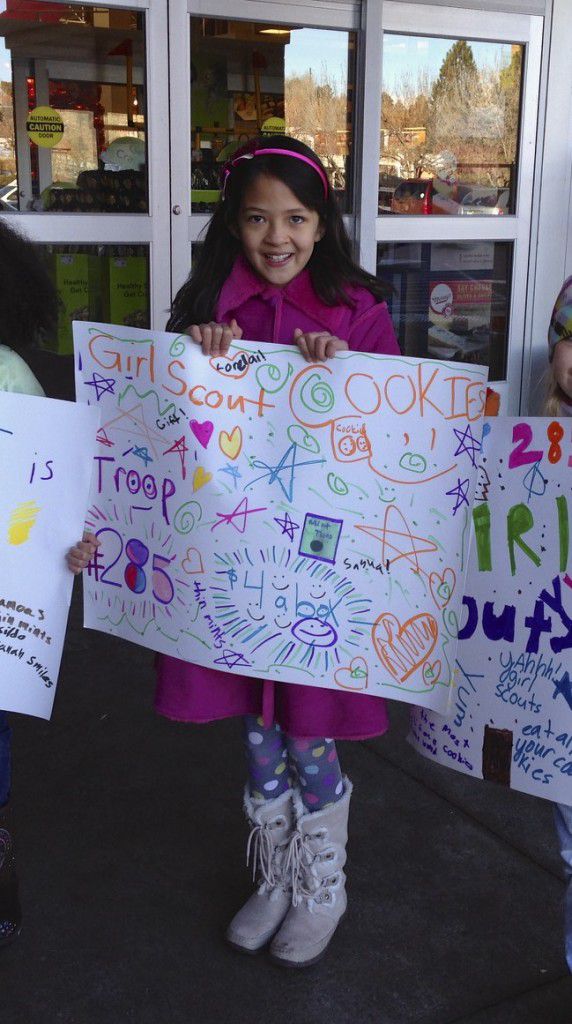 Oh, and I almost forgot! I made some really amazing ice cream sandwiches, incorporating the Samoas into a chewy sweet oatmeal cookie, then filling with toasted coconut ice cream. You should make them too! 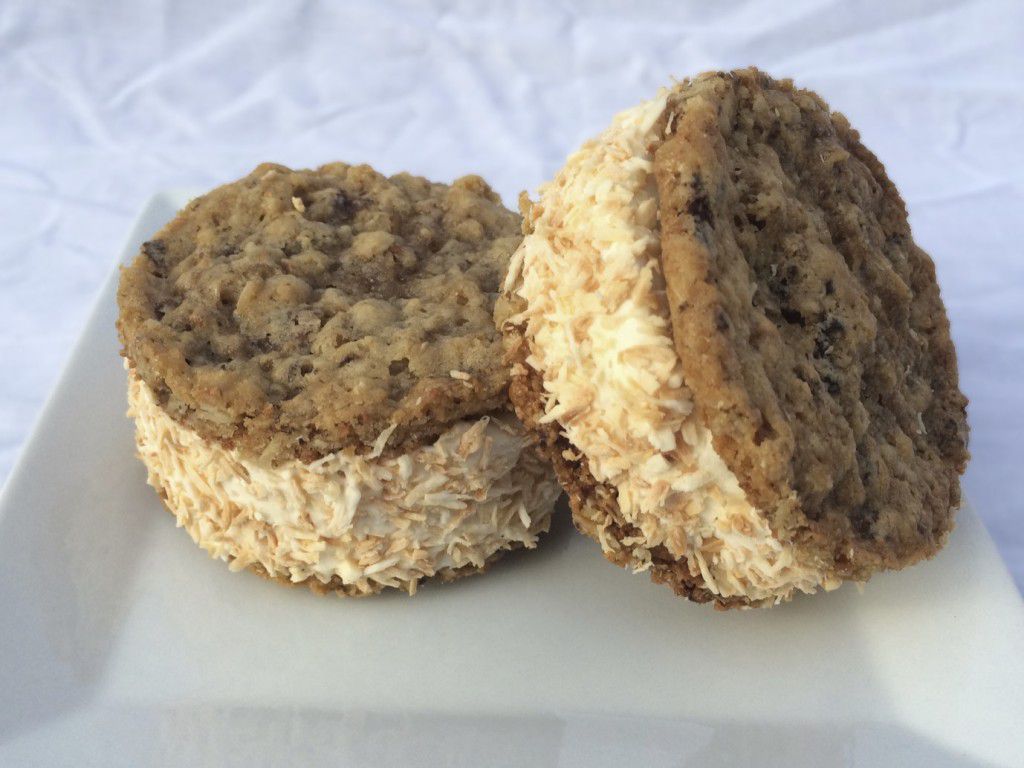 1 box of Samoas (15 cookies), chopped small (or with a Cuisinart)

In a large bowl, whisk together the flour, oats, chopped samoa cookies, baking soda, baking powder, and salt. Set aside.

In the bowl of a standing mixer, at medium speed, cream the butter. Add both sugars and mix for about 2 minutes, until light and fluffy. Add the eggs, then vanilla, scraping bowl as needed. Reduce the mixer speed to low and slowly add they dry ingredients until all the flour has been incorporated, again scraping the bowl as needed. Be sure not to over mix.

With slightly damp hands, roll dough into balls about 1 tablespoon each. You’ll want to make them as similarly sized as possible (using a cookie scoop, then rolling into balls works well).

Bake for 9-12 minutes, removing from the oven while the cookies still look a slightly undercooked in the center. Let rest on the baking sheet for a few mintues before transferring to a wire rack to cool.

Once cool, fill with a scoop of ice cream and top with a similar sized cookie. Roll in toasted coconut, wrap individually in plastic wrap, and freeze until firm.

Preheat oven to 350. Spread coconut on a baking sheet and toast for 5-7 minutes, stirring occasionally to ensure equal browning. Watch carefully, as it can burn quickly. Remove from oven when it’s toasty brown. Set aside 1/2 cup of the coconut for later use.

Over medium heat, warm the milk, 1 cup of heavy cream, 1 cup of the toasted coconut, sugar and salt in a small sauce pan. As the milk mixutre begins warming, split the vanilla bean in half lenghtwise, and using the back of a knife, scrape out the seeds. Add the scraped seeds to the warming milk, then add in the whole vanilla pod. Continue to warm, stirring occasionally, until the sugar has mostly disolved. Remove from heat, cover, and steep for 1 hour.

Stir the remaining cup of heavy cream and 1 teaspoon vanilla extract to the milk mixture, cover, and chill thoroughly in the refrigerator. Once cold, freeze the mixutre it your ice cream maker according to manufacturer directions.