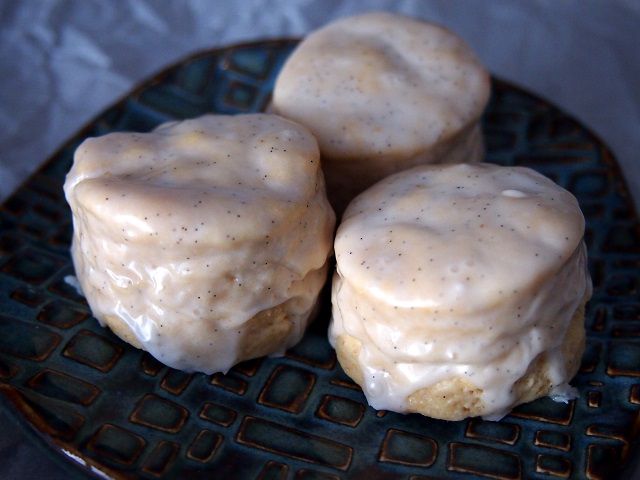 Have you had the Petite Vanilla Bean Scones from Starbucks?  For a few months I had a little addiction to them and every time I would get a coffee there I had to pick up some of these scrumptious little bites.  I have been wanting to make them at home ever since the first bite.

It hit me the other day that I had two beautiful vanilla beans given to me by Rodelle when Strudel and I went to the IFBC in September.  For months I have been wanting to do a post about Rodelle because I am IN LOVE with their vanilla.  What better way to showcase their wonderful vanilla beans and vanilla extract by making these yummy treats!

I was super excited to meet up with Jenna from Rodelle at the IFBC to learn more about their great company.  I was even more excited when Rodelle graciously donated a gift basket to raffle off at my Bake Sale for No Kid Hungry a few weeks ago. 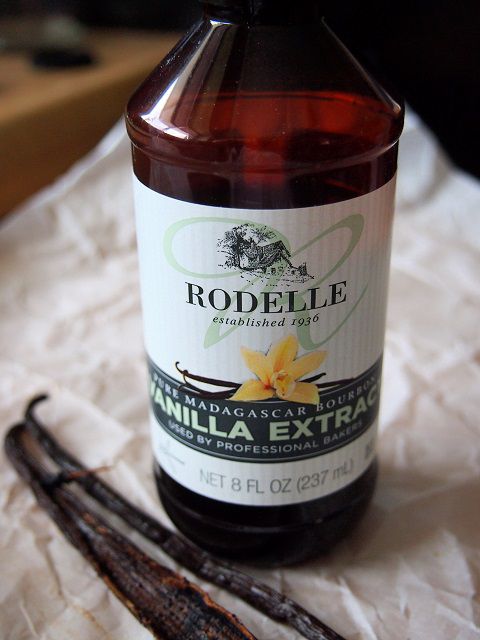 I first started using Rodelle Vanilla about a year ago when I had run out of the vanilla that my mother-in-law gives me when she goes to Mexico every year.  I went to get more at the grocery store and there on the shelf was a beautiful bottle of vanilla made in Colorado.  I had to try it!

I didn’t know what to expect with this vanilla but I made a cake with it, this recipe which I have made many times and know exactly what to expect when it comes to the flavor.  This vanilla has a deep, rich flavor that is noticeable in any recipe.

Rodelle Laboratories started in Denver in 1936 but didn’t start selling retail extract until 1985.  Privately owned and operated, Rodelle is America’s second largest brand of pure vanilla extract.  In 2009 a new production facility and warehouse opened in Ft. Collins.  Rodelle helps support the farmers that grow the vanilla beans through programs like their  Stove Project and Social Programs.  Check out the vanilla extraction process too! 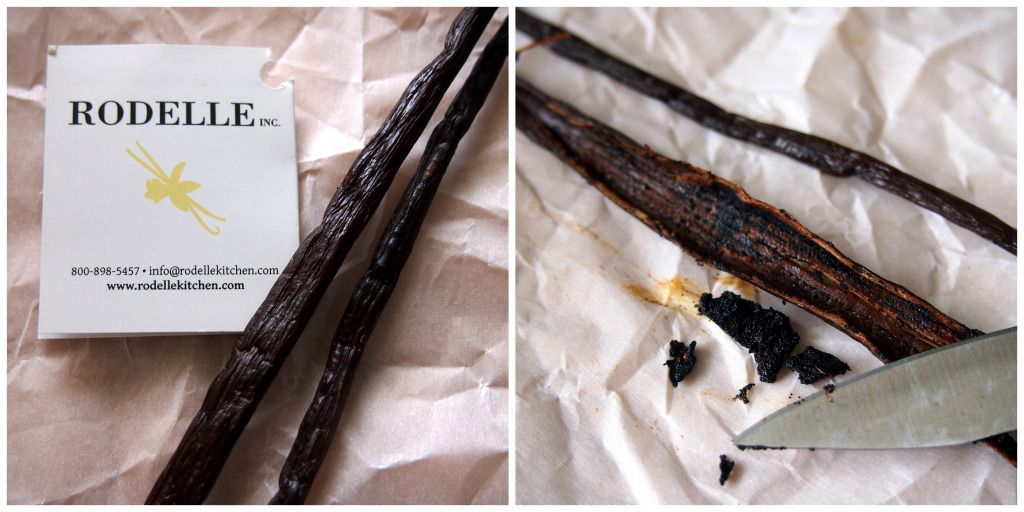 Combine the flours, baking powder, sugar and salt in the bowl of a stand mixer.  With the paddle attachment, mix in the butter until the mixture is crumbly.  Whisk together the milk, vanilla, duck eggs and scraped vanilla bean.  Add to the mixture and beat until the dough forms a ball.

Roll out on a floured board to about 1/2 inch thick.  Cut into small triangle or circles.  I used my 1 7/8 inch biscuit gutter. 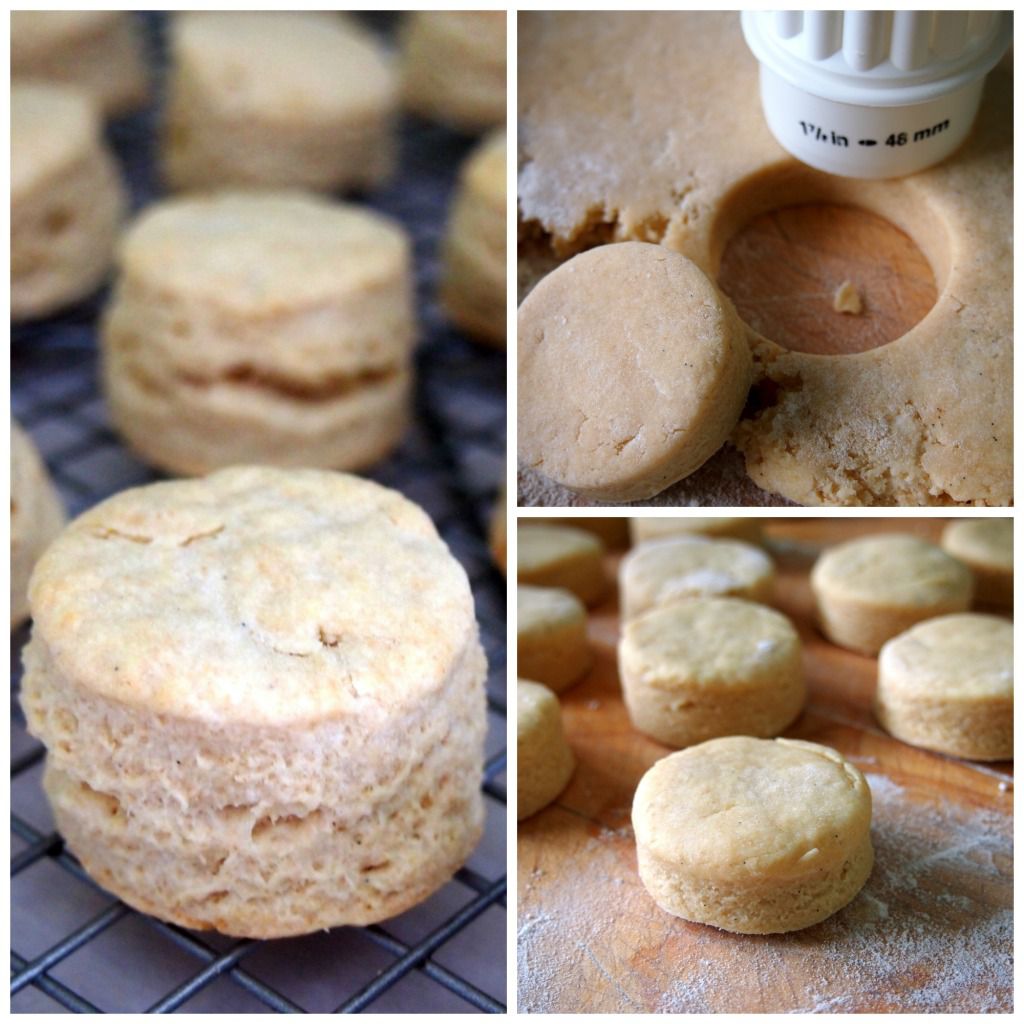 Bake at 375 degrees Fahrenheit for 13 minutes or until golden brown.  Let cool on a cooling rack for  a few minutes before dipping in the glaze.  Whisk the glaze ingredients together and then dip the top half of each scone in the glaze.  Let drain a bit before turning right side up and placing back on the cooling rack. 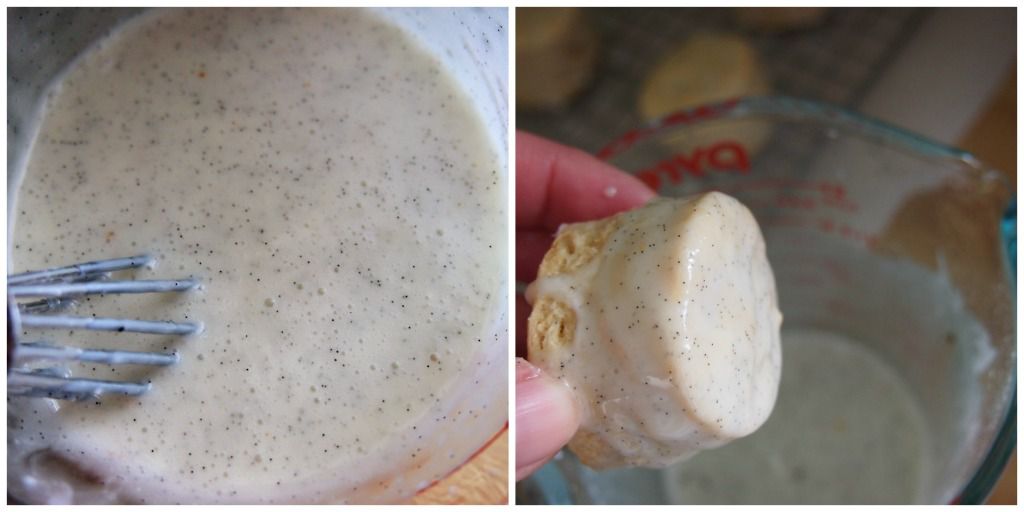 Let the scones dry for at least an hour and then store in an air tight container for several days.  All 3 dozen of these little gems lasted about three days in my house.  I did share with co-workers too! 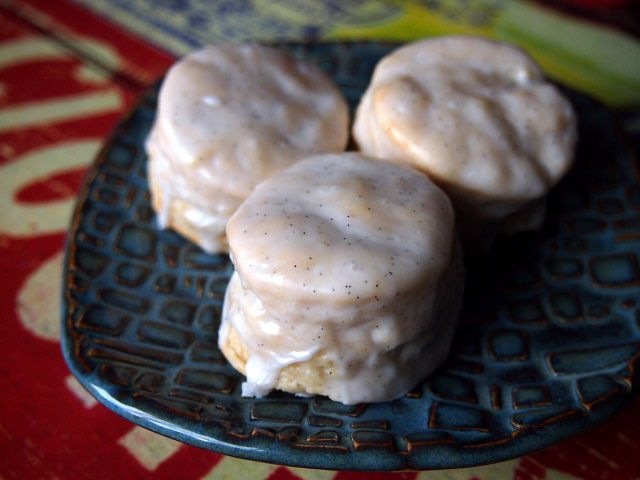