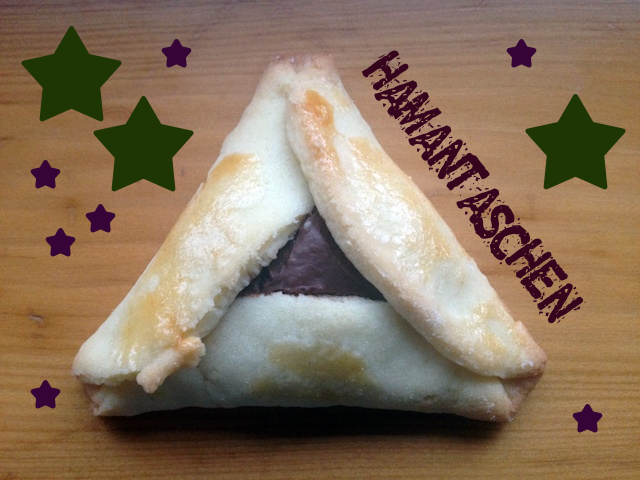 Okay, so those of us in the know about hamantaschen know that I’m waaay late to the party. For those unfamiliar, the cookies are eaten as part of the Purim celebration – which ended about a week and a half ago.

This was my first time making these cookies in years –  I’ve just never been crazy about them. My historical hamantaschen have been dry and crumbly, and the most common fillings (poppy seed or prune) just don’t appeal to me. But, I decided to take some hamantaschen fate into my own hands after a co-worker asked if I was making any for the holiday. I figured that if I made them “correctly” (ie to my tastes!) the cookies should  taste like a mini, fresh and delicious hand-held pie. I can do that, right?!

I did some research, and came across a recipe by Duff from the Food Network – a Jewish baker, so I figured he’d have both the Jewish food AND the desire for a tender cookie I was looking for. His recipe lists the poppy filling, along with some other creative ideas, none of which appealed to me. But with a little more digging around I learned that, really, the options are endless, and that apparently I’ve been deprived all these years. Case in point, for this batch of cookies I used homemade blackberry jam (we have such a wealth of wild blackberries that Seattlites use the jam as a bartering tool) and – wait for it – NUTELLA! (thank you very much)

All my hopes came true with these cookies – they were definitely a restorative Purim cookie experience. The blackberry jam was so delicious in combination with the flakey cookie, and the Nutella – well, that was like a hazelnut chocolate cookie from heaven. Obviously, they’ve been officially declared to be year-round cookies in my house.

Jam, Nutella, or anything you really really love

In a medium bowl, stir together the flour, baking powder and salt; set aside. In a large bowl, whisk the oil, eggs, egg yolk, sugar, zest, both juices and brandy until smooth. Gradually stir in the flour mixture until a sticky dough is formed. Wrap in plastic wrap, flatten into a disk and chill overnight.

When ready to bake, preheat oven to 375 degrees F.

Working with about one quarter of the dough at a time and leaving the remaining in the refrigerator, roll on lightly floured surface a little less than 1/4-inch thick. Cut circles using 3′ cookie cutters (or the rim of glass). Place a spoonful of filling of your choice in center (about 1 teaspoon per cookie).

There’s a great tutorial from The Shiksa in the Kitchen on how to fold up your cookies. Basically, you’ll fold up one side (leaving some of the filling visible), then fold over the opposite side to create a triangular tip at the top. Pinch together gently. Then fold up the bottom – on one side, just pinch the dough together. On the other side, you’ll want to fold one of the corners underneath the other before pinching it again (again, the Shiksa has a some great photos and step-by-step instructions).

Place cookies on parchment paper on cookie sheet, brush with a little beaten egg for sheen and bake until nicely browned, 10 to 15 minutes.

Keep room temp in airtight container but consume within 3 to 4 days (this won’t be a problem).

One Response to Hamantaschen