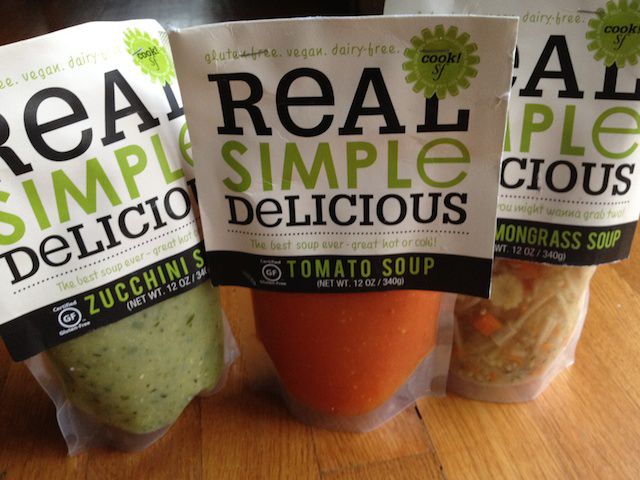 I have story to tell. It’s about a soup. A very delicious soup!

When Streus and I were at the Foodbuzz Festival, eating our way through the Taste Pavilion, we came across Real Simple Delicious soups. And for those of you who know Strues and me (or just one of us, for that matter), you know that we’re not women that squeal. Nothing against women that squeal, that’s just not our thing. We get excited, we jump up and down a bit, but neither of us is much for the shrill sort of shriek.

And then we landed on this soup! Seriously, one slurp and we were giddy women. After learning it’s vegan, low-fat and low-calorie, there was, in fact, much squealing. At the Festival, we sampled the zucchini soup, which was amazing (and I make my own version of zucchini soup that I’m quite fond of, so this is saying something). I think it’s the poblano chile that made it so tasty and savory.

The folks at Real Simple Delicious offered to ship out a few more soups to me in Seattle (they’re primarily sold in stores in the Bay Area) so I got to sample a few more flavors. The zucchini was still my favorite – it’s creamy and super flavorful, and I just couldn’t get enough of the poblano flavor. I though the tomato soup was also super tasty, a perfect dinner with the grilled cheese I dunked it in. The third soup they sent, lemongrass, was also tasty although I wished it was a little more lemongrass-y. I say that with the disclosure that I’m desperately in love with lemongrass and so generally feel anything with it should automatically have more.

If you’re in the Bay Area and have access to these soups, I’d get out there, quick. They’re a great, fast, healthy way to have a quick meal.

Posted on January 8, 2013
Posted in quick and easy, vegetarian