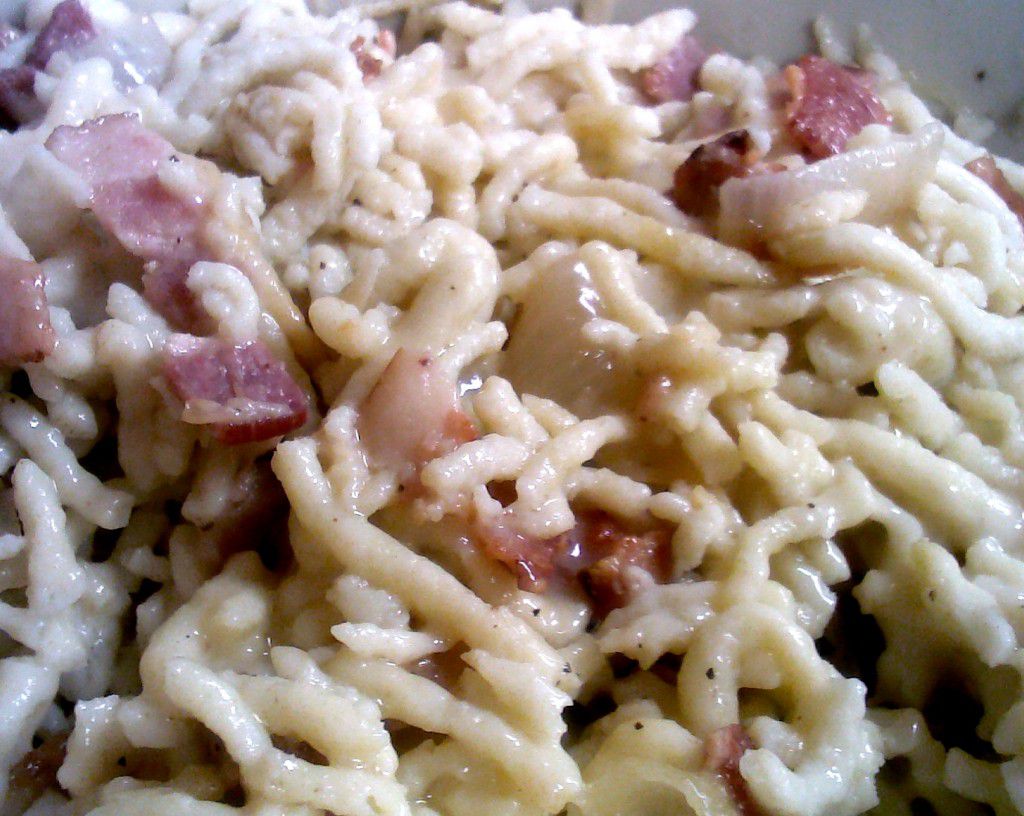 Just in time for Oktoberfest here’s a traditional German food to enjoy with all that beer!

My German neighbor, Inge, from a village near Heidelberg, taught me how to make this a few months ago.  I wanted to prove to myself that I could make it on my own.  She lent me her beautiful ricer from West Germany.  Can’t buy that at Bed, Bath and Beyond!

The key to making these noodles is getting the texture of the dough the right consistency so that when the dough is squeezed through the ricer, it stays separated as it hits the boiling water.

I made this for an Oktoberfest potluck so I made the noodles ahead of time, stored them in the fridge for 4 days.  Reheated them by pouring boiling water over them and then combined the noodles, cooked bacon and onions, and cheese in a crockpot and heated the next day for 4 hours on medium heat in a crockpot, they were tender and gooey and soooo good!  The top picture doesn’t do it justice, it was taken at the potluck with my phone’s camera.

about 4 c. all-purpose flour, but have more on hand if needed

about 1/2 c. Perrier or light beer (I used the Colorado Classic, Coors Light)

1 onion, chopped and cooked with the bacon

8 oz. shredded cheese (swiss or other) 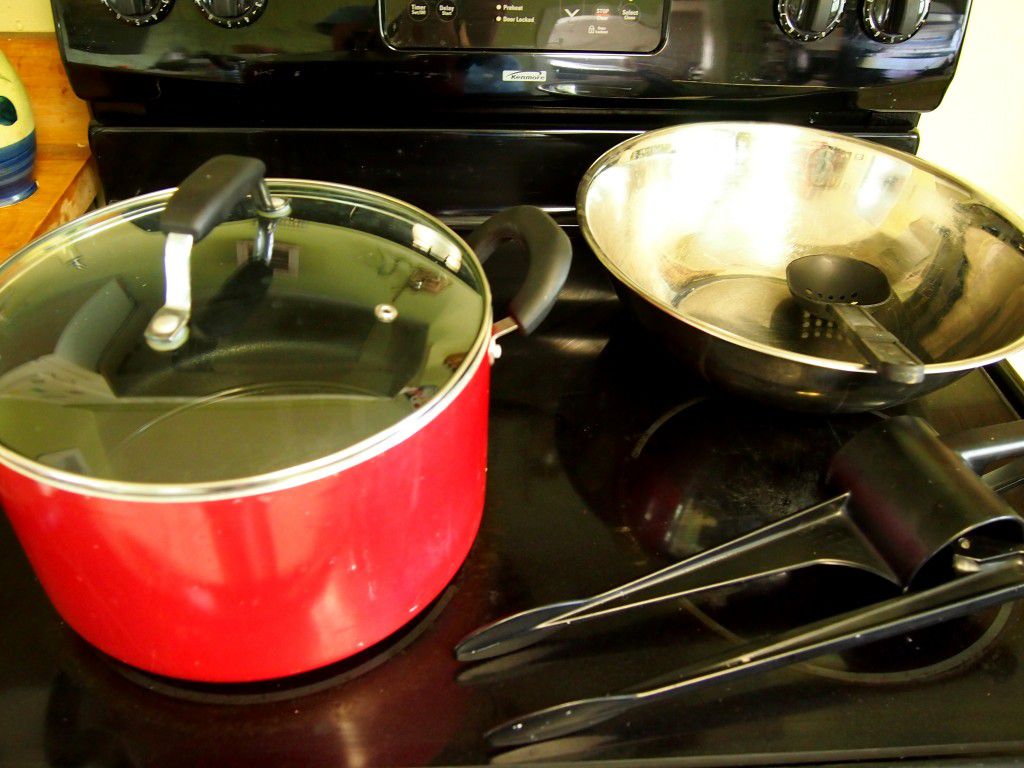 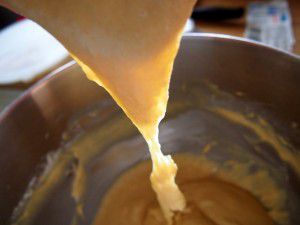 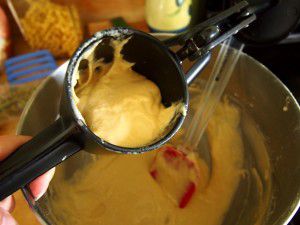 Keep adding the flour and beating it in until it is very glutenous (is that a word?).  When I did this is took about 15 minutes of adding and beating to get there.  When you think it is just about right, beat in the fizzy perrier or beer and then add another 1/2 c. flour.  It’s a runny dough but when a spoon is pulled out it will be sticky but break at the end,  This is when the gluten is just right.  The amount of flour varies to get to this point.  While beating the dough, have a boiling pot of water ready as well as the ricer close at hand.  Fill the ricer about 3/4 full with dough using a big spoon and press the ricer about 2 or 3 inches over the boiling water. 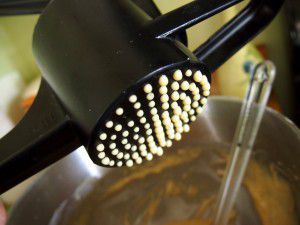 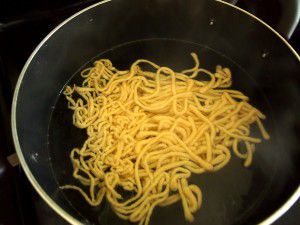 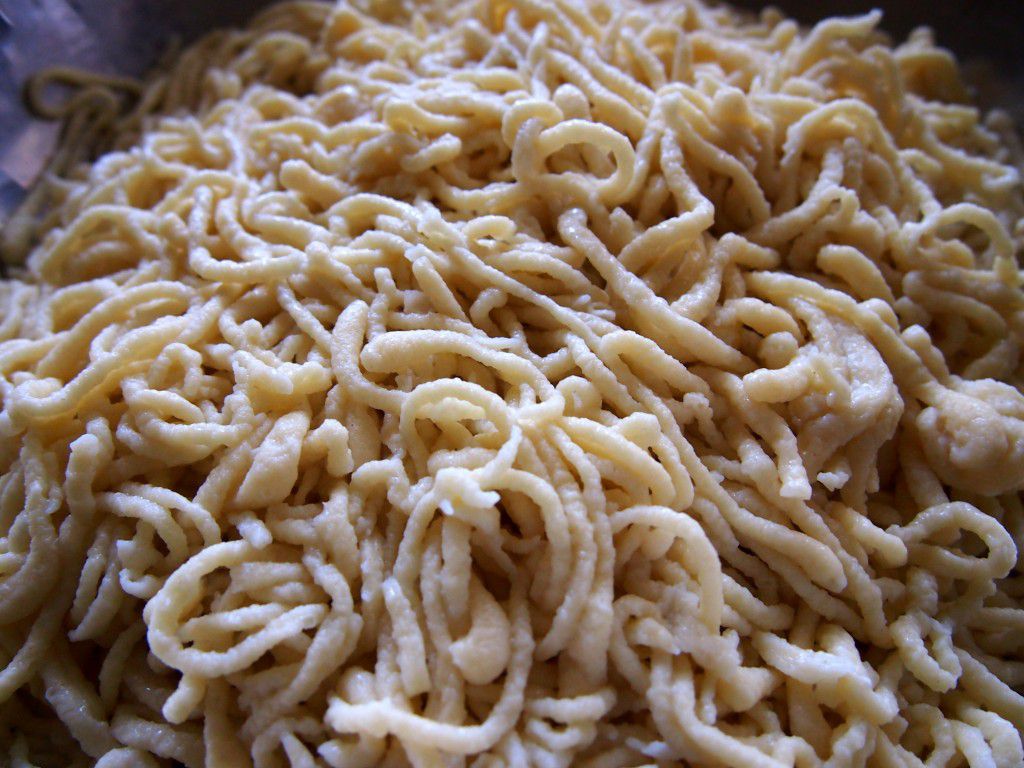 The noodles can be stored in the refrigerator for up to 5 days.  Reheat by pouring boiling water over them and letting them sit for 5 minutes, they taste just like they were made fresh!

Layer the noodles, bacon/onions and cheese in a crockpot, starting with the noodles and ending with cheese.  Pour the milk over the top.  Refrigerate overnight or immediately turn on the crockpot to high for 30 minutes and then reduce to medium and cook for about 4 hours.  Stir two or three times during the cooking process. 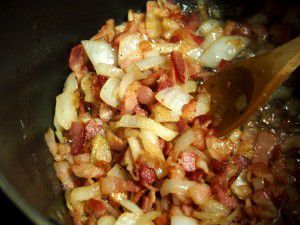 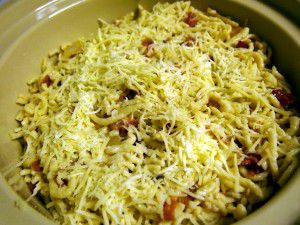 If baking in the oven, layer in a large baking dish and bake for 30 to 40 minutes at 350 degrees Fahrenheit until golden and bubbly.

← Energy Candy from a Queen of the Kitchen      Quinoa Cheese Cups →