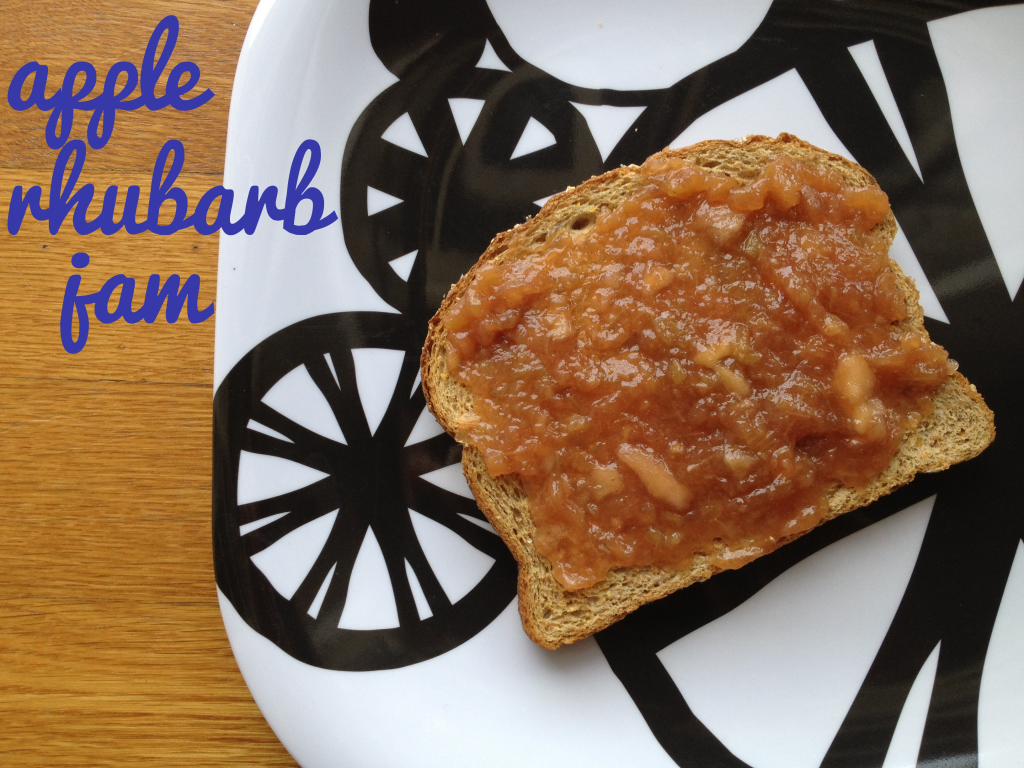 It’s not that I don’t actually understand that produce comes from outside of the grocery store, it’s just that I still find it surprising that people can walk outside, pick something out of the ground, and (magically, suddenly) serve dinner.

That being said, I’m also awful at keeping things alive (fyi, I don’t mean people – they do just fine), but leafy things. Potted plants, herbs – you name it, I’ve researched it, spent money on it, interrogated sales people about best practices, and then taken it home and killed it (note: most often, I kill because I over water – which I like to define as “loving too much”).

After years of this pattern of violence against leafy things, I gave up. I started feeling badly every time I bought something that I planned to grow, because I felt like I was taking it home to do a death march. Other than one half-hearted attempt at a community garden (everything died), I haven’t attempted to grow anything for nearly 10 years.

But! I’ve become re-inspired (if you hear leaves rustling, it’s probably the collective shiver of plants everywhere). Our new house came with TWO glorious apple trees, and since we’ve only lived here for two months, I haven’t had time to over love it (plus Brandon seems to have defaulted to being in charge of the outdoor space). I’ve totally smitten with walking outside, picking an apple off the tree, and having a healthy and delicious snack that I (incorrectly) feel incredibly proud of myself for, like I was the one who created the apple and then grew the fruit.

This also means that we have TONS of apples, more than we know what do with. So I marched myself right to the local hardware store, bought a canner, and viola! (again like magic) I made jam! (my first ever). And not any jam – jam that tastes exactly like a slightly tangy apple pie. Delicious!

Oh, here’s a few gratuitous photos of our apples: 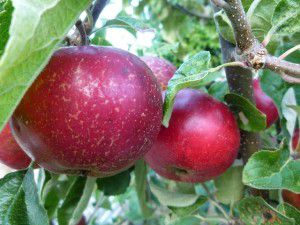 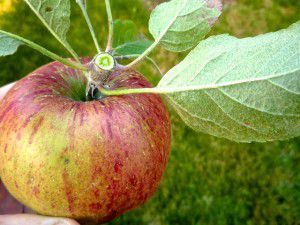 I was all worked up over canning, but it turns out it just involves boiling stuff. I can totally boil! Here’s the guide I used:

Otherwise, the jam is straightforward. 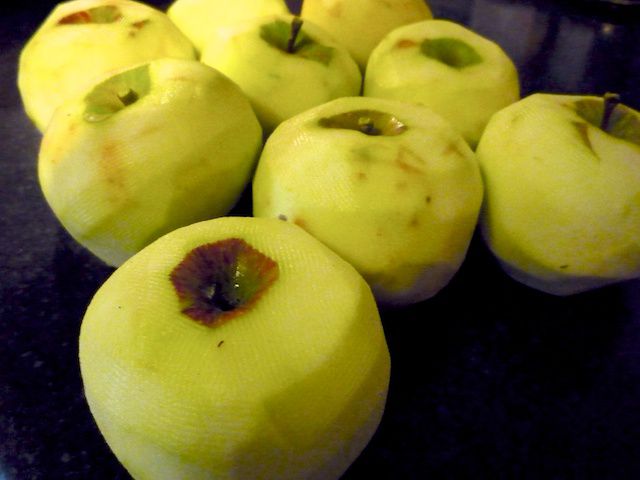 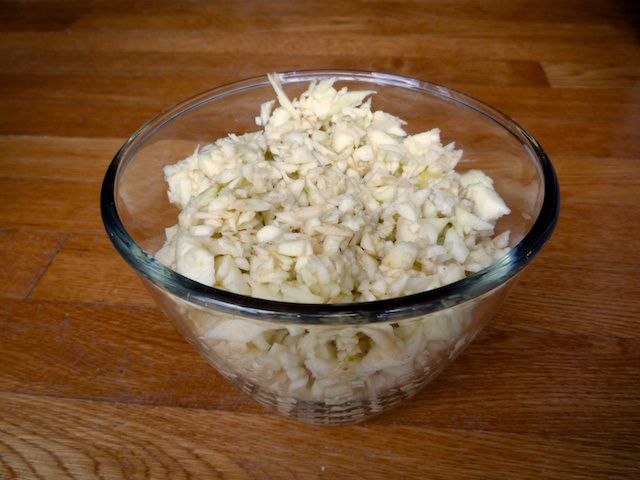 Then chop up your rhubarb 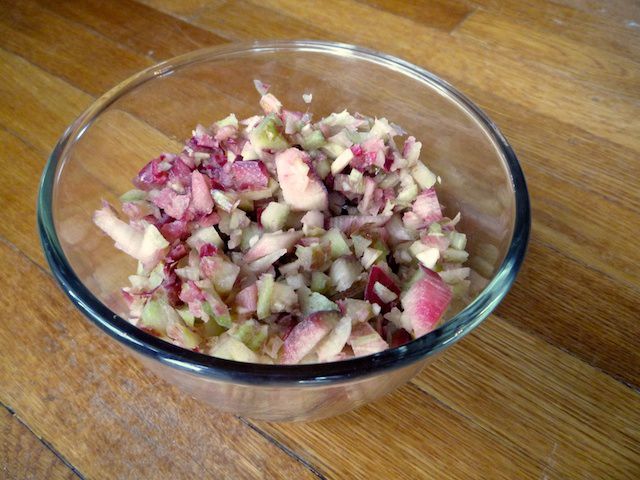 The put the apples, rhubarb, sugar, water, cinnamon, and pectin in a pot, and cook down 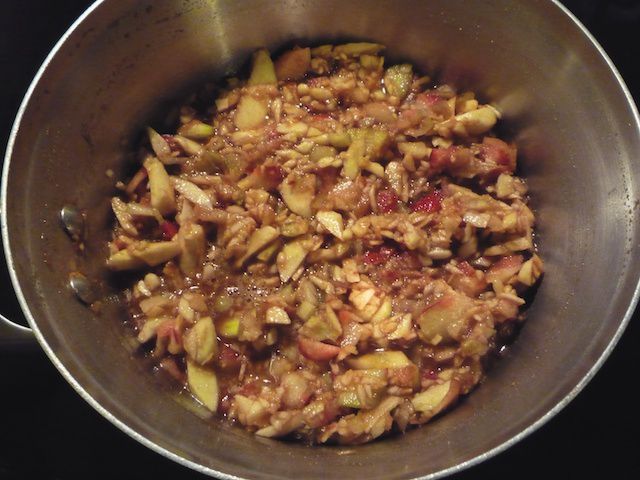 Once it’s done cooking down, it will be very jam-like. Just can according to directions, and you’ll be resplendent with jam! 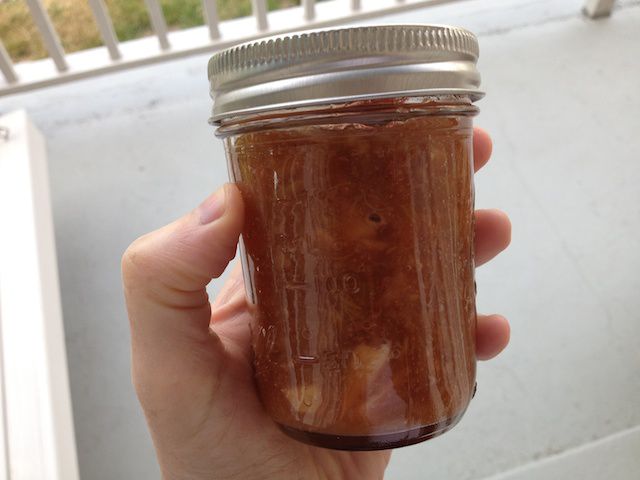 In a large saucepan mix together the rhubarb, apples, sugar, water and cinnamon. Bring to a boil, then cook over medium heat for 20 minutes or until the fruit is soft. Stir in the pectin and boil for 5 minutes.

Ladle into sterile jars, wipe rims with a clean cloth or paper towel, and seal with new lids. Process in a bath of simmering water for at least 10 minutes, or as recommended by your local extension if you are at a high altitude. Store unopened jars in a cool dark place. Refrigerate jam after opening.

Posted on September 11, 2012
This entry was posted in breakfast, healthy and tagged apples, canning, jam, rhubarb.