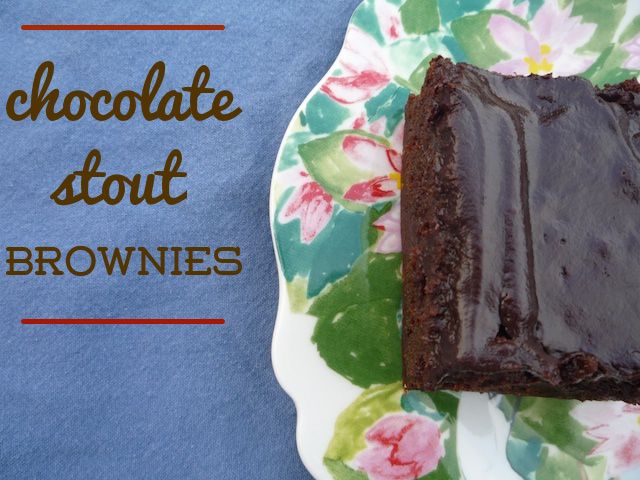 I got into a big fat fight with these brownies and had to make them twice (they won the first time around, coming out raw, despite an nearly an hour in the oven).

But here’s the great thing: totally worth it. Turns out these brownies are like a giant chocolate bomb of gooey goodness.

I found this recipe in a recent issue of Bon Appetit, and was super excited to make them. I don’t know what was going on with me that day (this isn’t a complicated recipe), but the first time around, it was trouble. I ruined the beer the first time I tried to reduce it (I let it boil for too long and it got super concentrated), so had to toss that and start again. I got the beer right on the second try, but when I baked the brownies, I took them out of the oven too soon and was left with a pan of what looked like a solid brownie, but turned out the be a semi-hard crust with raw innards. I felt sad.

So, a few days later, with the realization that it was my co-worker Amy’s birthday and that I’d therefore have a pile of people willing eat a batch of brownies, I tried again. I was gentle with the beer, and it boiled down beautifully (recipe says it takes 12 minutes – I’d say it took me about 15). I chose not to be fussy about a double boiler, and melted the chocolate and butter slowly (and on a very low power setting) in the microwave. Also, I committed to keeping the brownies in the oven until I felt confident that they were fully cooked. The recipe says that they need to bake for 35-40 minutes; in the end, mine took about 1 hour 1o minutes. I was very excited to learn that it was all worth it; they were super moist, dense, and satisfying. Even with the debacle of the first try, I’d say it was well worth all the effort! 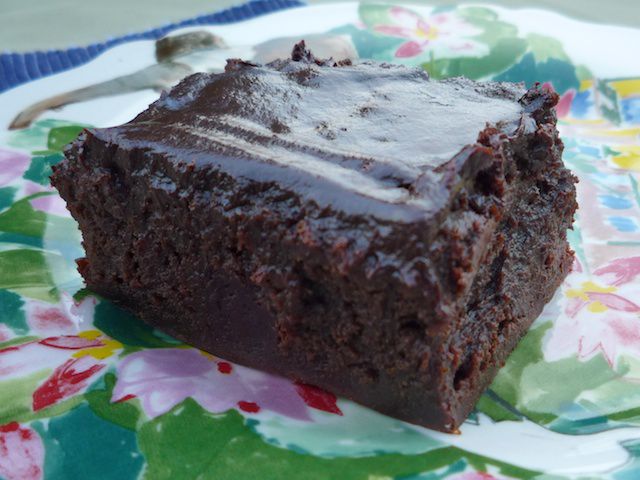 1 cup stout (such as Guinness)

Preheat oven to 350°. Line a 9x9x2 metal baking pan with foil, leaving a 2’’ overhang (note: I used a glass pan, lined it both ways with the foil, and sprayed the foil with cooking spray). Bring stout to a boil in a medium saucepan; cook until reduced to ½ cup, about 12 minutes. Let cool. Reserve ¼ cup stout.

Stir 12 oz. chocolate and 1 cup butter in a medium mental bowl set over a saucepan of simmering water until melted and smooth.

Whisk sugar, eggs, and vanilla in a large bowl to blend. Gradually whisk in chocolate mixture, then ¼ cup stout from pan. Fold in flour and 1 ¼ tsp. salt. Pour batter into prepared pan.

Bake brownies until surface begins to crack and a tester inserted into center comes out with a few moist crumbs attached, 35-40 minutes (note: mine took about 1 hour, 10 minutes). Transfer pan to a wire rack and let cool for at least 20 minutes. Stir remaining 4 oz. chocolate in a medium metal bowl set over a saucepan of simmering water until melted and smooth. Add reserved ¼ cup reduced stout, remaining 2 Tbsp. butter, and ¼ tsp. salt; whisk until well blended.