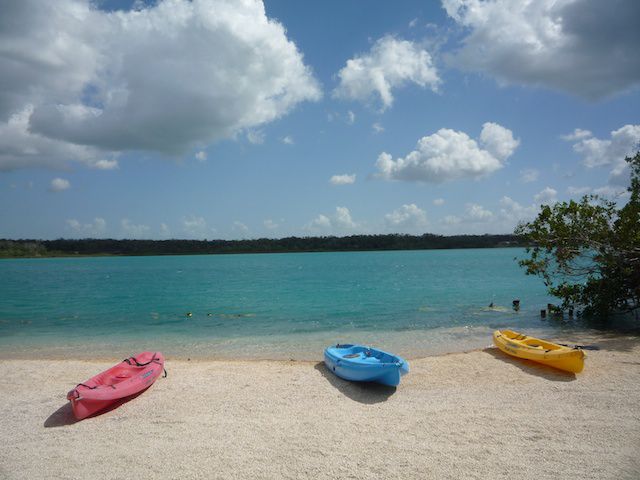 This past week, I’ve suffered mightily from PVD (post-vacation depression) after being forced back into normal life following an amazing week-long trip to the Yucatan Peninsula. I know… poor me!

Sun-starved and sallow, Brandon and I slumped our way out of Seattle two Friday ago (it was raining when we left, although I can’t lie – we felt smug with the knowledge that we were heading toward a week of sunshine). Wearing clothing usually only reserved for our sofa, we boarded a red-eye to LAX, then flew from LAX to Mexico City, finally catching a flight to Chetumal, Mexico. We were pretty exhausted after 12 hours of flying, but when I walked on to the tarmac in Chetumal, I swear to all that’s holy – I was like sad plant discovering glorious light for the first time. I felt myself bloom. I’m sure the bright sun on my pastey white skin caused glare for the other travelers, but I didn’t care. There was warmth! Everywhere!

We were picked up by the hotel – the kind, friendly, enthusiastic, and thoughtful staff of the Explorean Kohunlich – and driven to the hotel. Photos of the hotel grounds are below; it was incredibly beautiful (I spent most of the week wondering how I got to be lucky enough to take vacations like this). The Explorean is an all-inclusive, and while I was initially hesitant, it turns out that because the grounds are in the jungle (which I’d known but hadn’t quite appreciated), save a few small towns, there was really nothing else around.

The hotel offered one activity each day – visiting Mayan ruins, biking in the jungle, kayaking in lagoons – plus beautiful hotel grounds and an amazing pool to lounge by.  There was also a full-service restaurant that was basically open all day, plus a self-service bar open. The Explorean also offers a full-service spa, but we were too busy on activities (or lounging) to take them up on their services.

I have to mention, again, how great the staff was. From the waiters in the restaurant to the women who dropped off a sweet each night (when they came to turn on our patio ceiling fan), it was just a group of incredibly kind people. We especially loved our tour guides – Herlan and Enoc – who were filled with information and tons of fun. Especially Herlan, even though he subscribed to a “let’s splash the tourists!” attitude during the kayaking trips.

This is the outside of the hotel. The lobby was under the giant palapa. 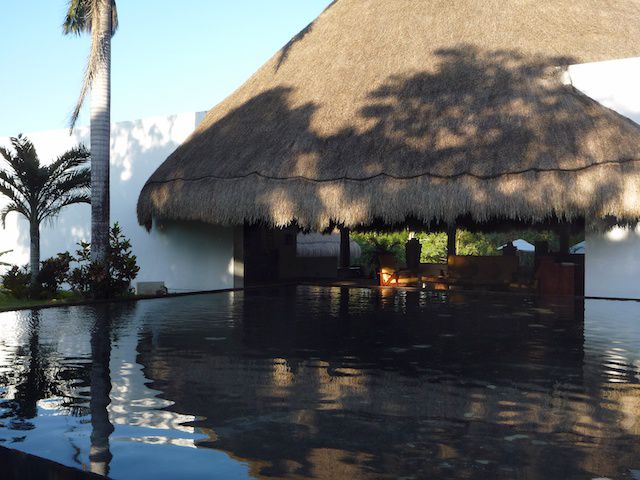 This is the always-open, self-serve bar 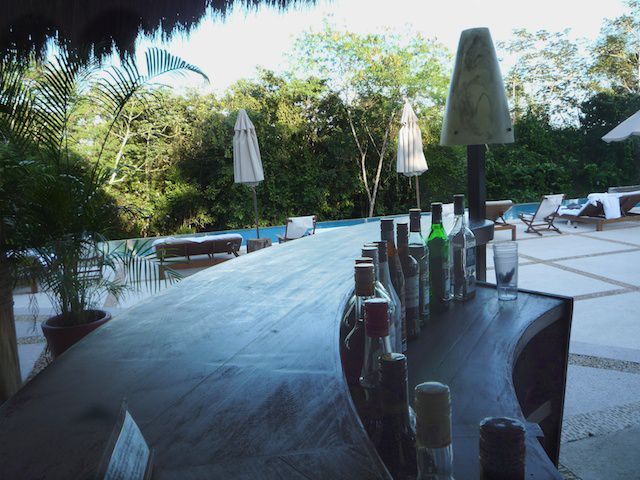 And the super fantastic pool 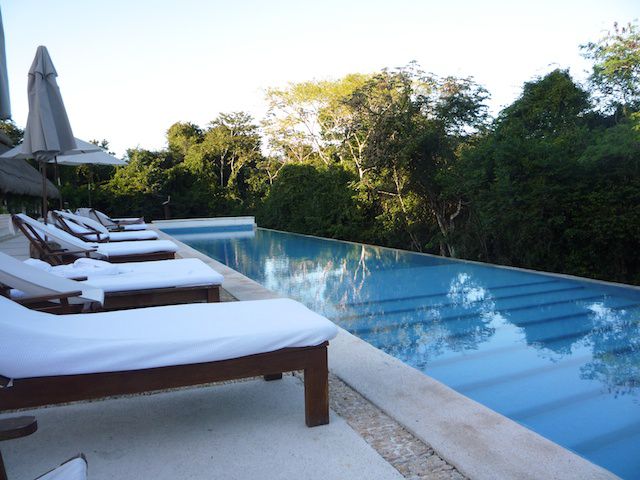 Here some views of the hotel, from me. 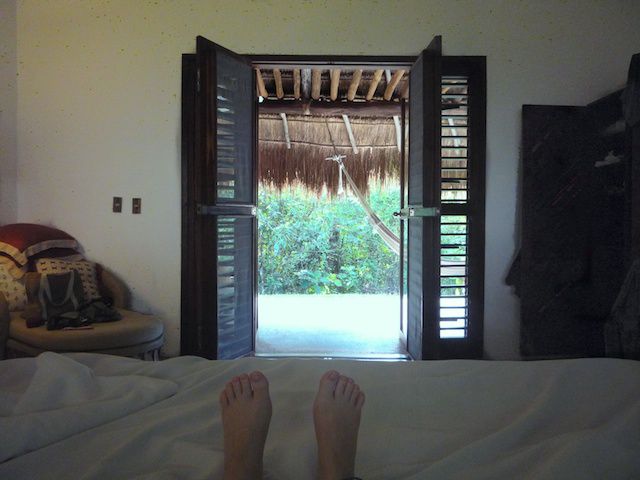 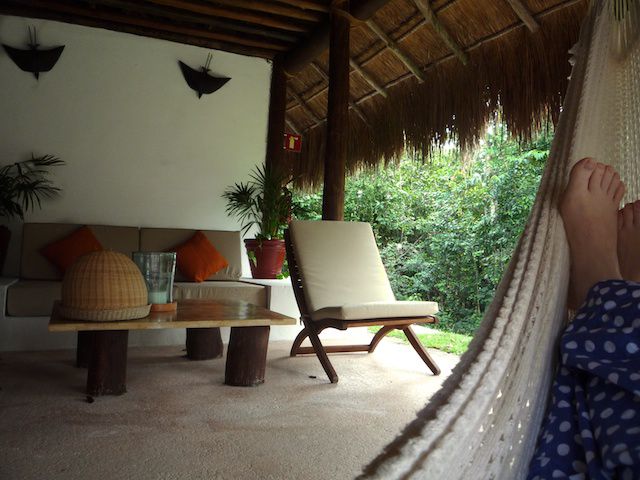 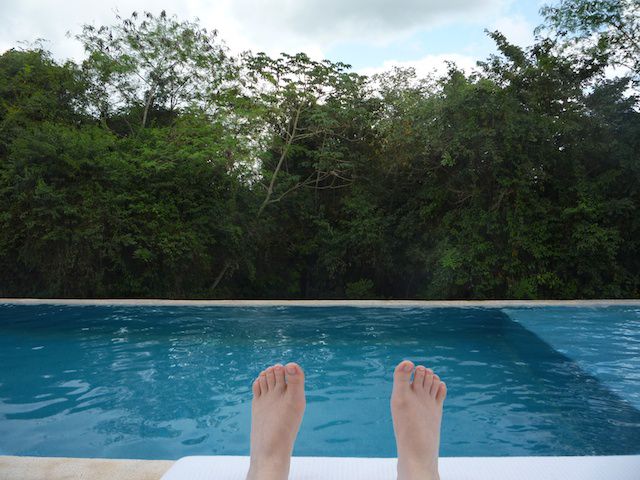 Here’s some photos of the places we went.

First up, incredible Mayan ruins. This giant mask was at the archeological site close to the hotel, called Kohunlich, that we visited on our first day 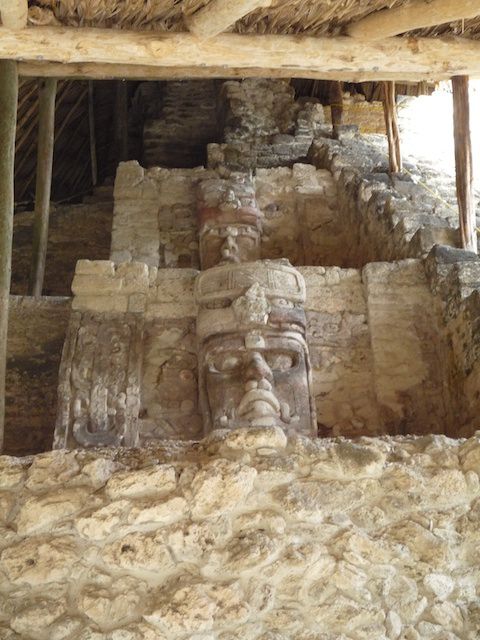 Another day, we were driven to an area called Becan, that had some incredible temples. 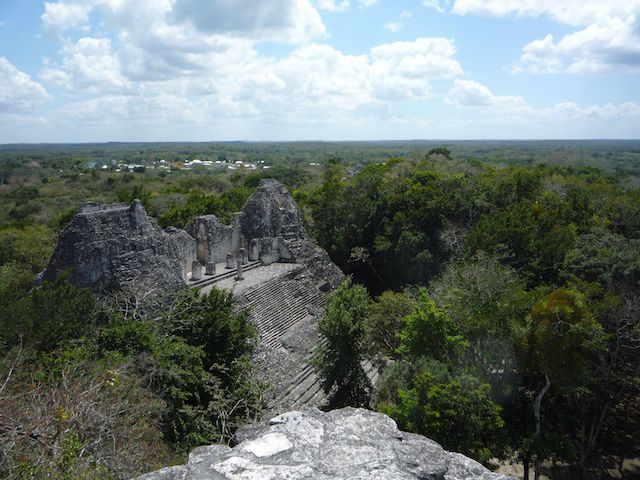 To take that photo above, we climbed up a nearby site. These were the stairs that lead to the top of the temple we climbed (that’s Brandon on the right, running up). 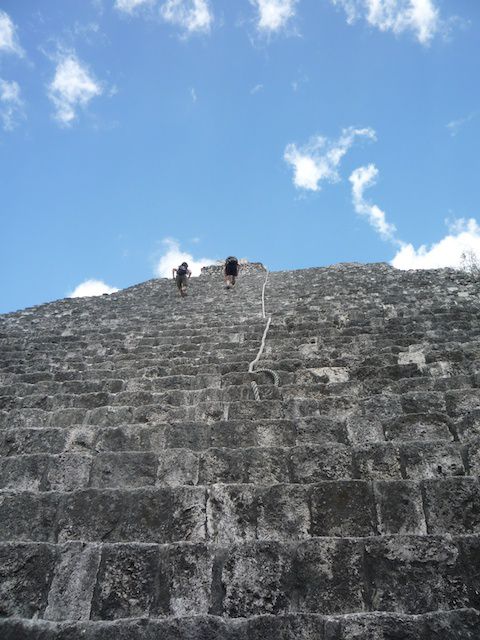 Here’s me at the top, looming down. 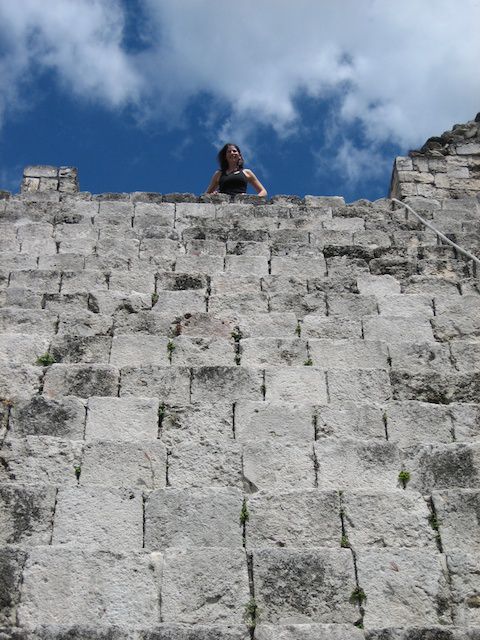 This was at another Maya city nearby, Xpuhil 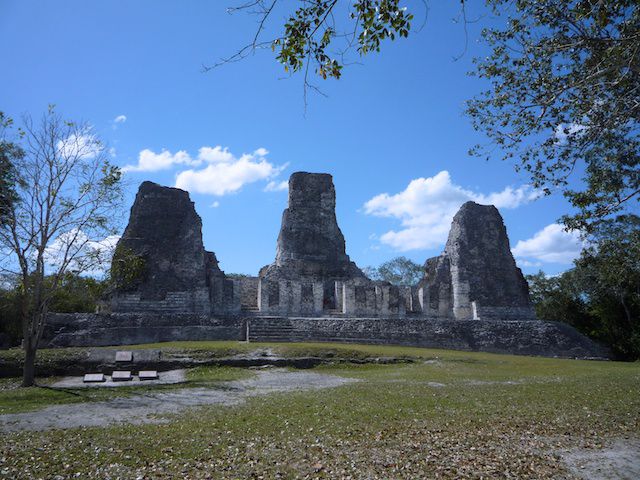 We also went on a bike ride in the forest, to explore the site of a Franciscan convent. This is us getting onto our bikes with our new friends Anne Marie and Dave, who we met on this trip (they live in Atlanta and were super fun to hang out with). 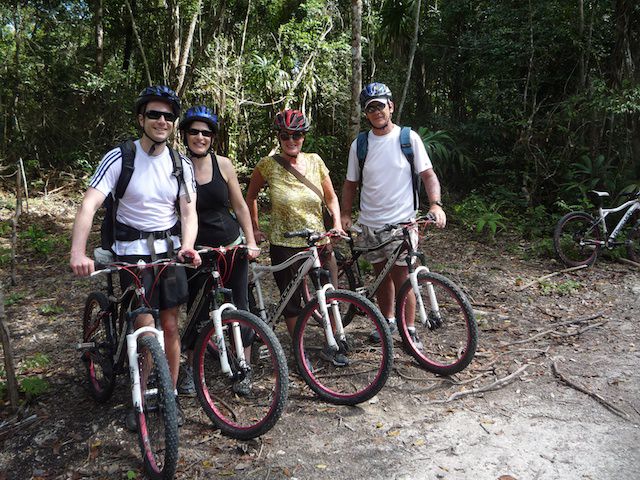 And here we are again, feeling forest-y. 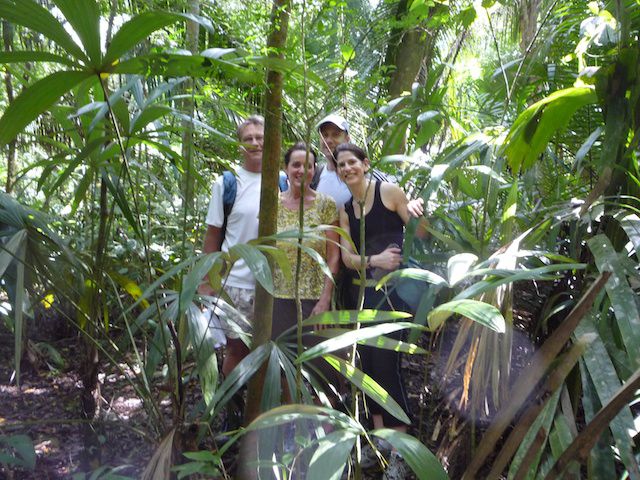 Plus, we went kayaking twice, which was probably my favorite activity. We did a daytime and a nighttime kayak trip; no photos of the nighttime trip (where it was so clear that the stars reflected into the lake. The lake itself was so vast and calm that I told Brandon I felt like was a noodle in a giant bowl of soup).

But, here’s some idea of what our daytime kayak trip looked like at the Bacalar lagoon. 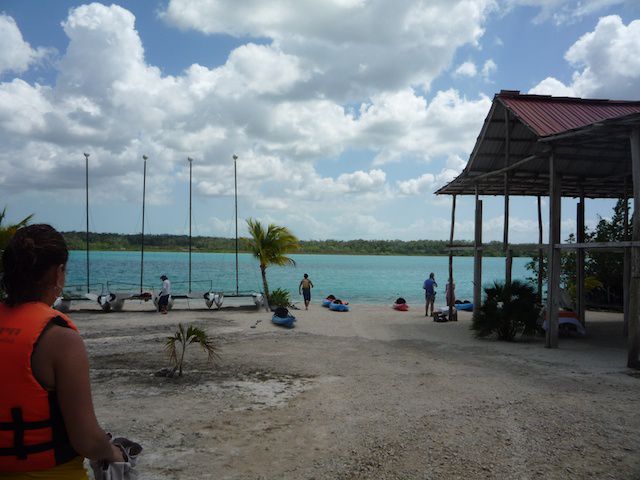 We got to go sailing, too 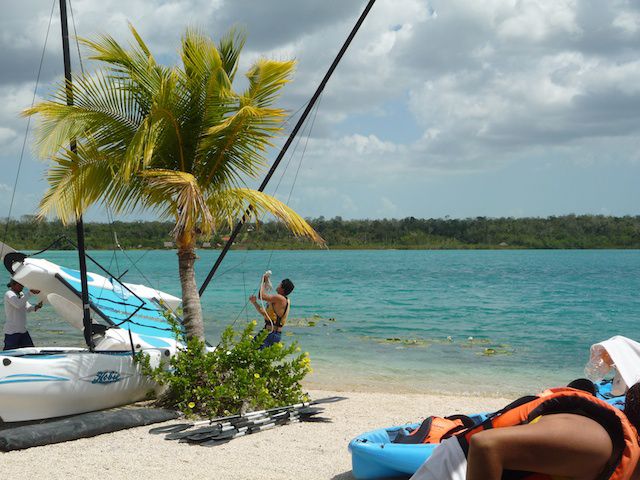 While we were out sailing, the staff had arrived and set up a beautiful lunch for us as a surprise. Pretty amazing! (and I totally had my “How did I get to be so lucky?!” thoughts running steadily through my head) 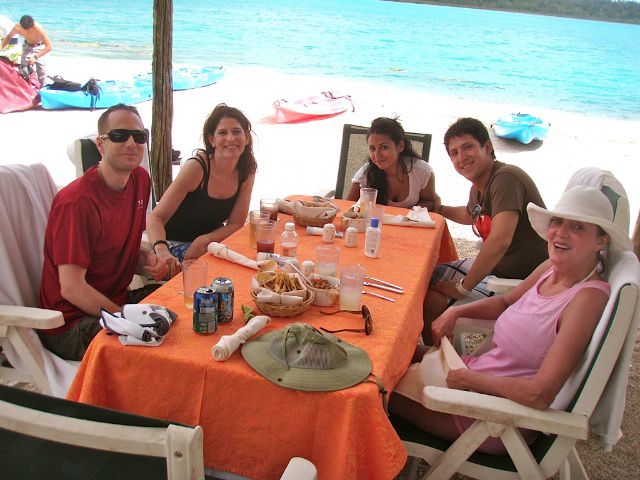 And because this is a food blog, I obviously have to post photos of what and how we ate.

Each morning, the hotel staff dropped off a pre-breakfast snack of some variation of bread or pastry, fresh-squeezed orange juice, and coffee. 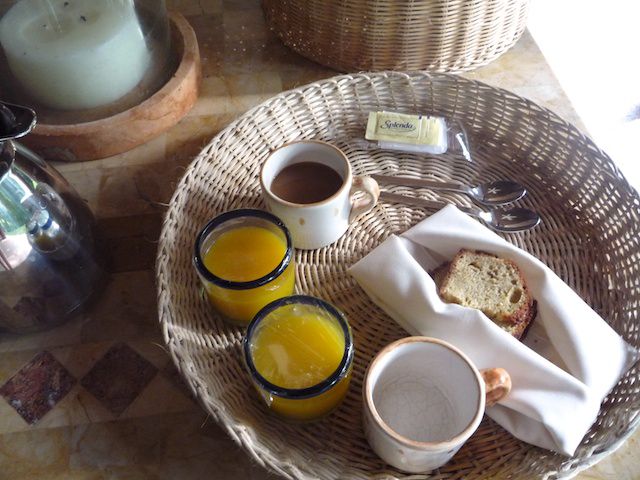 After this, we’d move on the breakfast (because it’s vacation, right?! We figured two breakfasts were perfectly acceptable within this framework).

Here’s the fruit breakfast I got on most days: fruit, yogurt, coffee, and more juice. 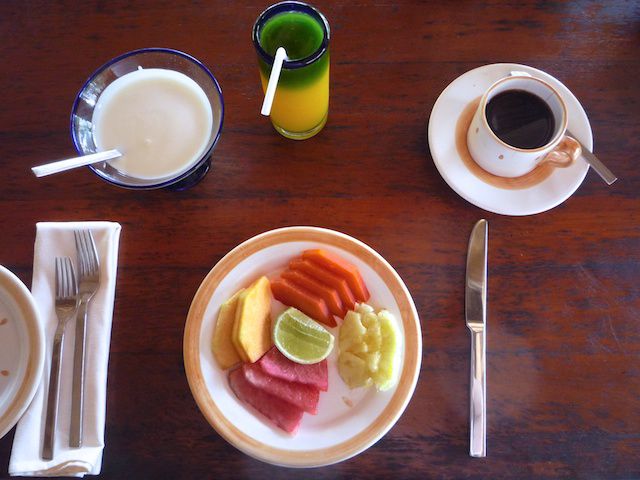 Brandon got chilaquiles one morning, with the largest egg I’ve ever seen. We spent some time during breakfast trying to imagine the size of the chicken it came from. 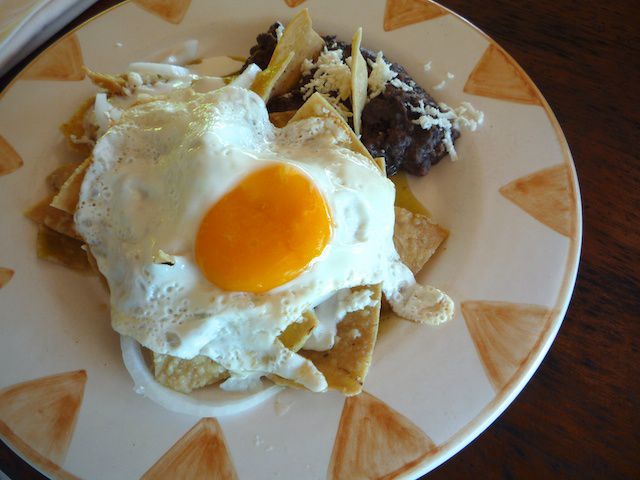 About halfway through the trip, my body started to reject the two-breakfast, tortilla-chips-and-salsa-at-every-meal diet that I had previously been enjoying. I switched to a “lighter” lunch of a quesadilla and mushrooms (heavy on the ‘shroom, light on the queso). I started calling it my quesa-daily. Hilarious, I know. 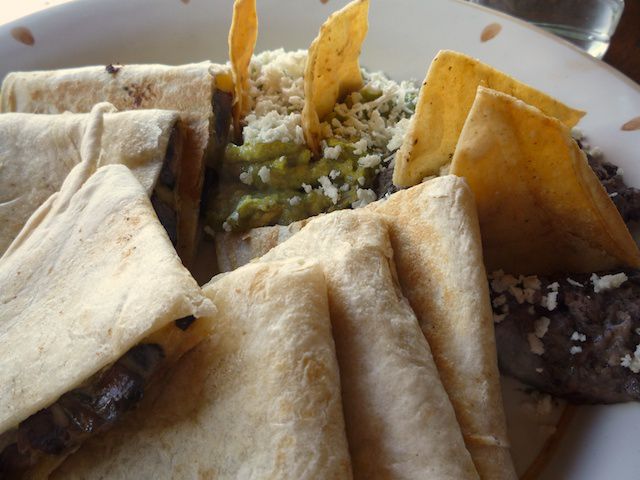 For whatever reason, the hotel made dinner more of an adventure. Here’s a lovely fish wrapped in a banana leaf that was super yummy (Brandon ordered it)… this was an example of a dinner we felt good about. On the flip side, I didn’t photograph the “melted octopus” – chopped octopus with melted cheese. It was like scrambled octo. I chalk it up to regional differences, and I DO love a taste challenge, even if I don’t love the meal itself. Anyway, here’s the fish (well, it’s buried under the tomato, but I promise it’s there) 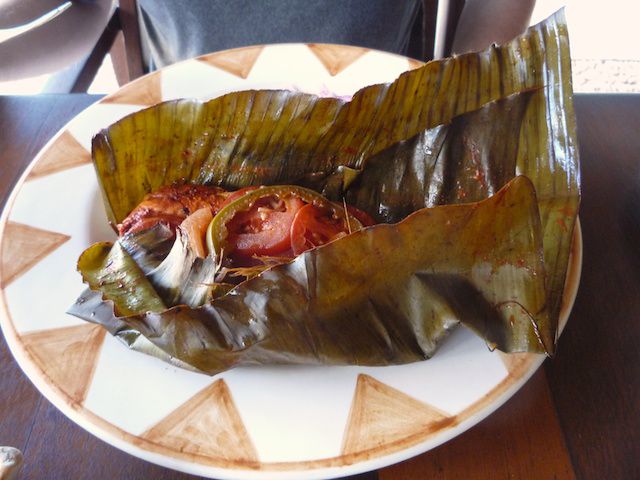 And, of course, cheesecake for dessert 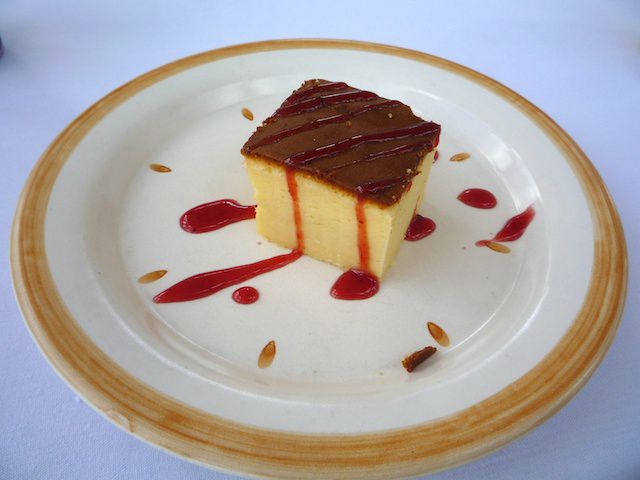 Posted on March 14, 2012
This entry was posted in travel and tagged mexico, travel.