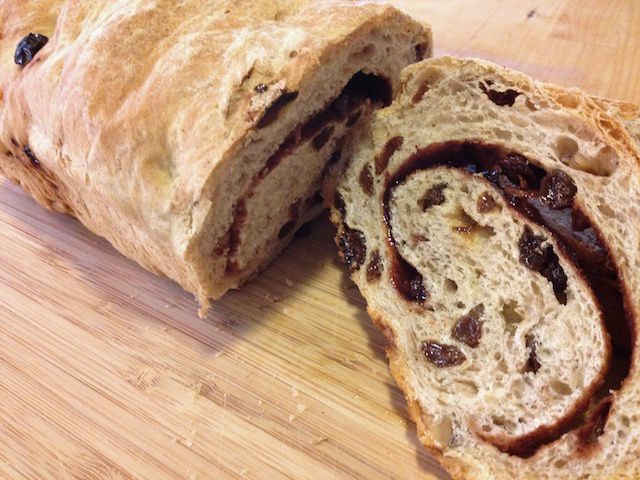 I woke up the other morning in a baking mood (i.e. craving flour). I had a bunch of stuff to do, but was feeling motivated to fit everything in. Settling on this recipe – from the fancy cookbook “The Bread Baker’s Apprentice” – I was able to fit in all of my errands during the two rising times. During the first rising time, I went for a run. During the second rise, I went to bathing suit shopping. And while the loaves baked, Streusel and I skyped. By the end of the day, I felt very accomplished!

I should note that this isn’t a fussy bread to bake, but it does take some time. It’s well worth the time, though. The dough itself doesn’t have much sugar, so the cinnamon sugar swirl add as lovely sweetness without a bread that tastes too much like dessert. Although- if you spread a little cinnamon-sugar cream cheese on top, and you’ve definitely got an addictive breakfast (or mid-afternoon snack, as the case may be!)

To start off, gather up your dry ingredients 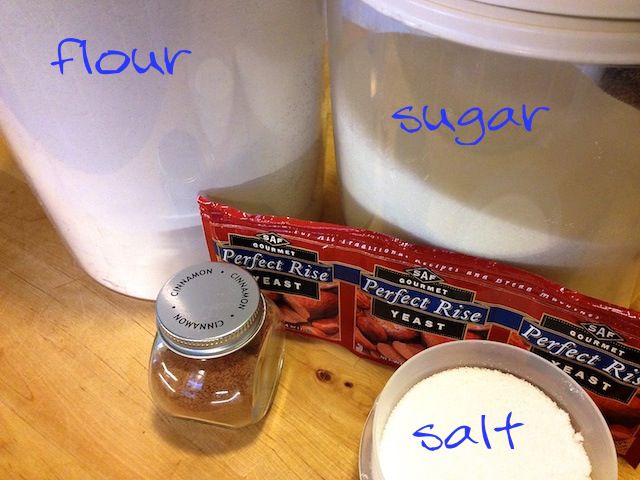 and the wet ingredients 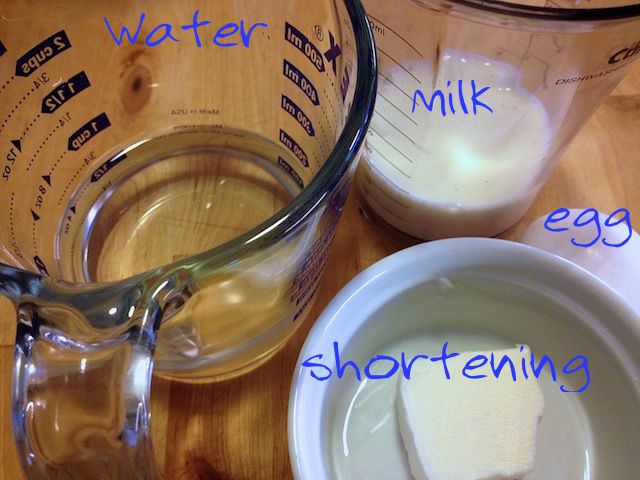 and the mix ins. 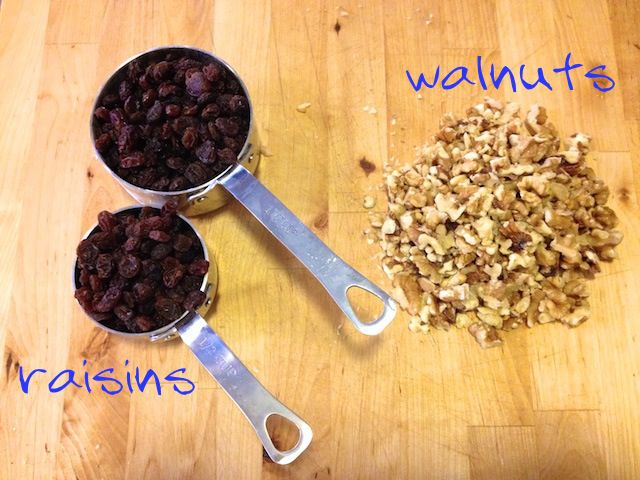 Stir up all the dry ingredients 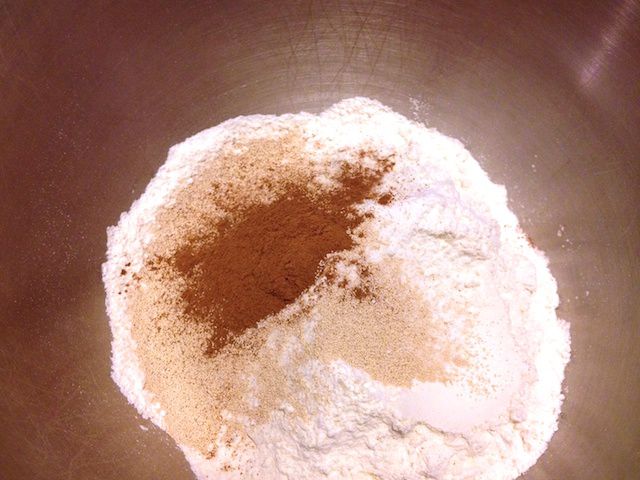 add the wet ingredients, and knead with the dough hook – my dough was a bit sticky while it was kneading, so I added in a few more tablespoons of flour. 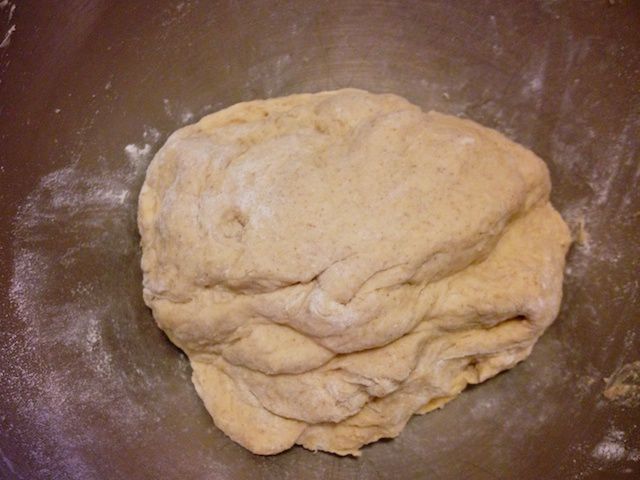 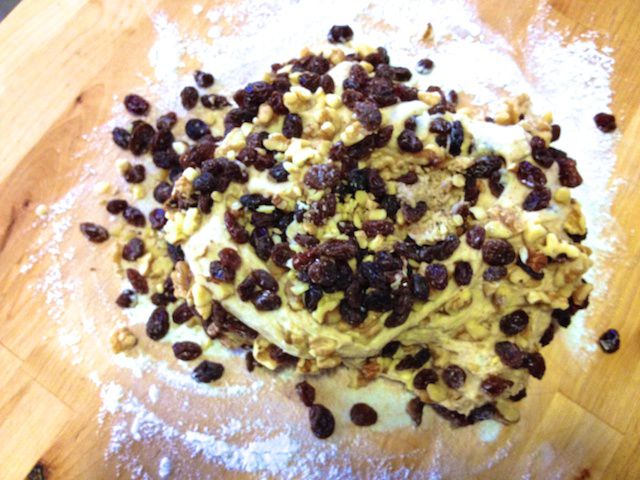 until walnuts and raisins are happily involved. 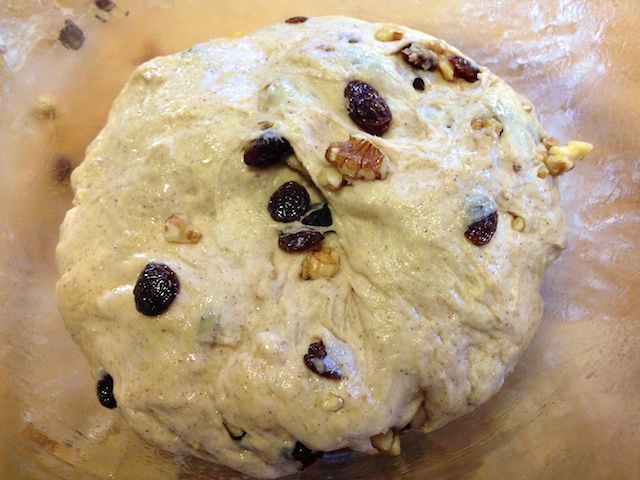 Let rise in an oiled bowl for 2 hours 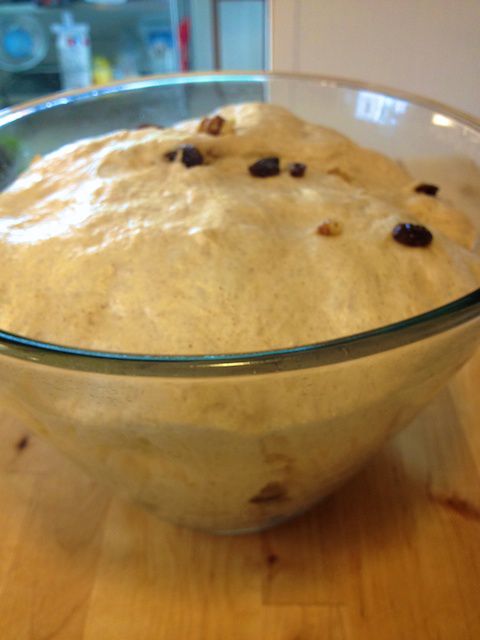 then divide into two loaves, forming each into a rectangle 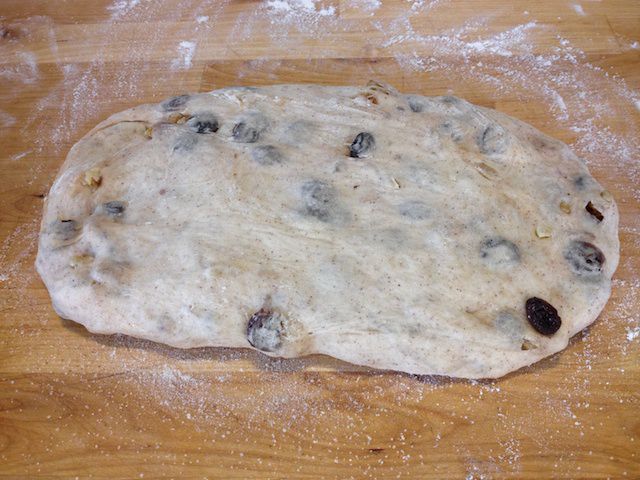 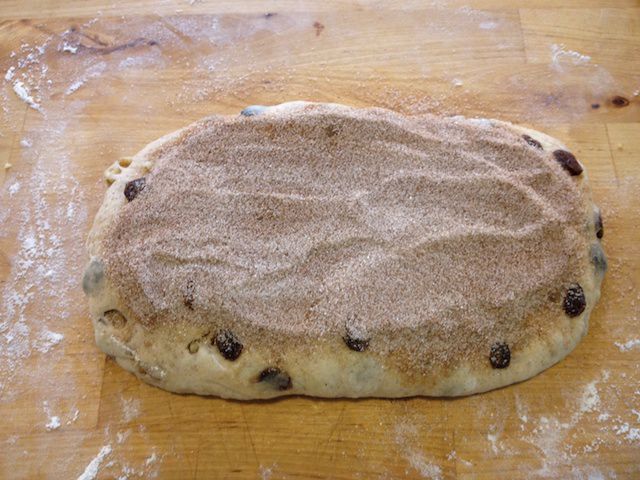 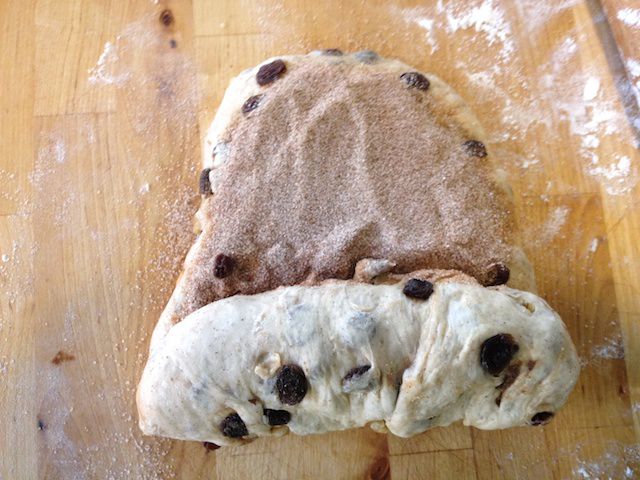 and the rock to seal and even out. 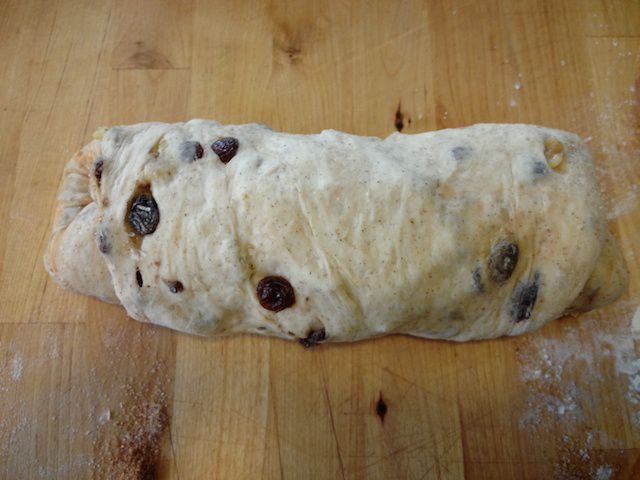 Dough is placed into loaf pans to rise 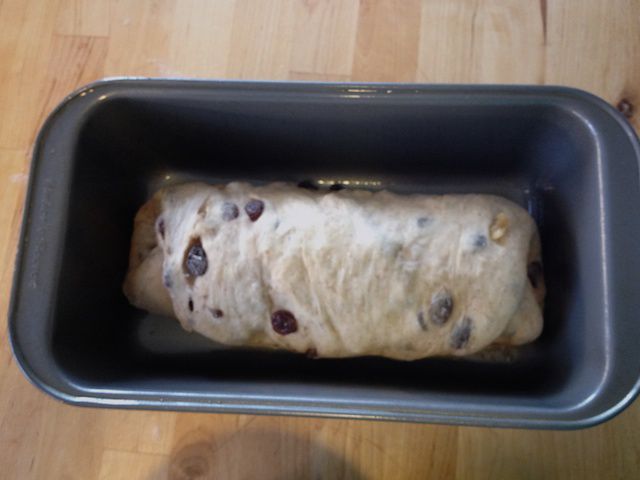 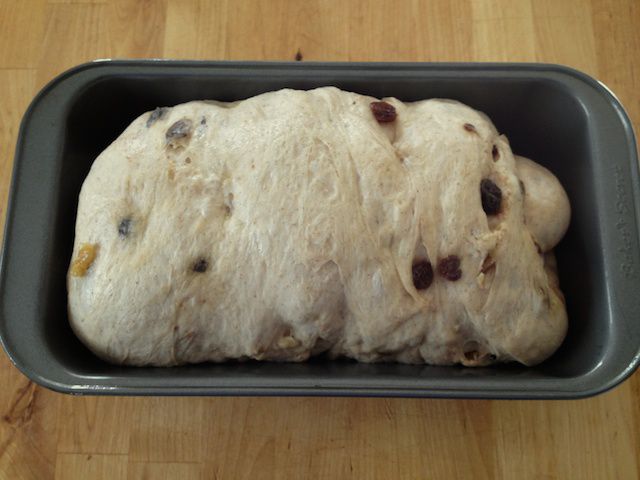 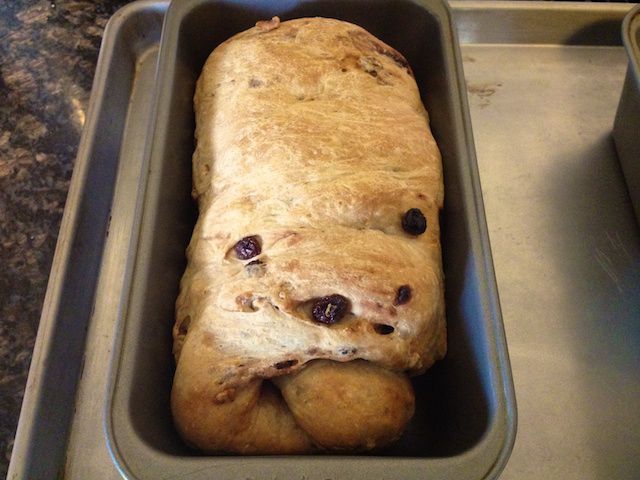 And into my mouth! 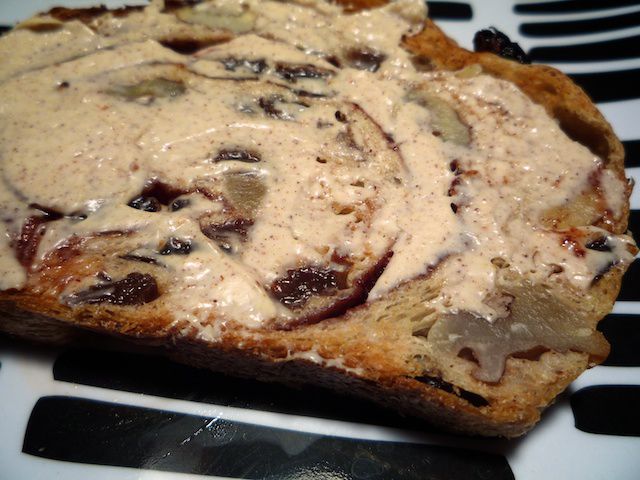 (note: cinnamon cream cheese was made with whipped cream cheese, softened to room temp, a little sugar and a whole bunch of cinnamon)

1. Stir together flour, sugar, salt, yeast, and cinnamon in a mixing bowl (or in the bowl of an electric mixer). Add the egg, shortening, buttermilk, and water. Stir together with a large spoon (or mix on low speed with the paddle attachment) until the ingredients come together and form a ball. Adjust with flour or water if the dough seems too sticky or too dry and stiff.

2. Sprinkle flour on a counter, transfer the dough to the counter, and begin kneading (or mixing on medium speed, switching to the dough hook). The dough should be soft and pliable, tacky but not sticky. Add flour as you knead (or mix), if necessary, to achieve this texture. Knead by and for approximately 10 minutes (or by machine for 6 to 8 minutes). Sprinkle in the raisins and walnuts during the final 2 minutes of kneading (or mixing) to distribute them evenly and to avoid crushing them too much. (If you are mixing by machine, you may have to finish kneading by hand to distribute the raisins and walnuts evenly).

3. Lightly oil a large bowl and transfer the dough to the bowl, rolling it to coat with oil. Cover the bowl with plastic wrap. Let rise at room temperature for approximately 2 hours, or until the dough doubles in size.

4. Mix together the cinnamon sugar, whisking together ½ granulated sugar and 2 tablespoons ground cinnamon.

5. Coat two 8 ½ by 4 ½ loaf pans lightly with oil. Divide the dough into 2 equal pieces and form them into loaves.  To make loaves, flatten dough into a rectangle about 5 inches wide and 6-8 inches wide. Sprinkle ½ of cinnamon sugar mixture over the surface of the rectangle. Working from the long side of the dough, roll up the length of the dough. The loaf will spread as you roll, extending to 6-8 inches. Once it’s entirely rolled up, rock the loaf to even it out, but do not taper the ends. Place the loaf, seam side down, into lightly oiled pan. Repeat with second loaf.

6. Mist the top with spray oil, and cover loosely with plastic wrap. Let rise at room temperature for 60 to 90 minutes, until the dough crests above the lips of the pans and is nearly doubled in size.

7. Preheat the oven to 350°F with the oven rack on the middle shelf. Place the loaf pans on a sheet pan, making sure they are not touching each other.

8. Bake the loaves for 20 minutes. Rotate the pan 180 degrees for even baking and continue baking for another 20 to 30 minutes, depending on the oven. The finished bread should be golden brown on top and lightly golden on the sides and bottom. They should make a hollow sound when thumped on the bottom.

9. Immediately remove the breads from their pans and cool on rack for at least 1 hour, preferably 2 hours, before slicing or serving.

optional: bush the tops of the baked loaves with  melted butter as soon as they come out the bread pans, then roll them in the cinnamon sugar.