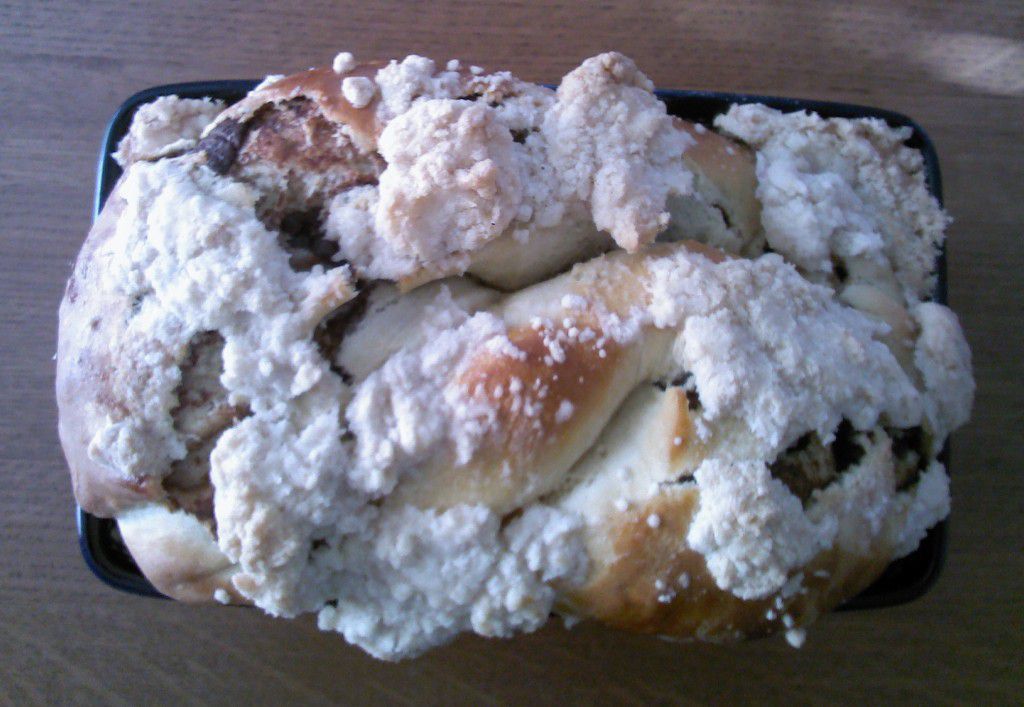 We have a holiday tale to tell (okay, it has nothing to do with the holidays, but we’re trying to bring this around to the season). It’s a story about babka, the amazing sweet bread that brought Strudel and me together.

I’m just now realizing that we’ve been at this blogging thing for over a year, and somehow neither of us has yet to post our favorite recipe!

Because, truth be told, if it weren’t for babka, Strudel and Streusel wouldn’t exist (dramatic, but true!).

Okay, so here’s our story:

It’s 2007, and the first night of a 3 series artisan bread class at Cook Street School of Culinary Arts, in Denver. The class is awkwardly standing around when Strudel, a stranger to Streusel, has felt a gulp of anxiety after hearing the instructor say, “You will need a partner for the three nights of this class. Pair up! Go!”  What! Everyone in the small class seems to be previously partnered up, or looks, well, odd. In the panic only an introvert can feel, Strudel frantically scans the room again, and, with enormous relief, notices what appears to be an unpartnered and fairly normal looking chick standing across the room…

Fast forward a week later, to the second night of class, when the instructor announces the choice of baking adventures for the night is either babka or cinnamon raisin bread.  Strudel turns to Streusel and says, “I’m sorry, I know we don’t know each other and I don’t mean to be pushy, but we MUST make babka.  My family loves me a lot right now, but if I learn to make babka, my family will really love me!”  Streusel easily agrees, not because she’s laid back and awesome (which she is!), but because, quite frankly, she’s never heard of the stuff. But when the bread is baked – a lovely soft bread rolled with layers of sweet chocolate and rich cream – she understands. She is wiser.

Fast forward – several months later – Strudel and Streusel decide to babka together (at this point, “babka” is used as a verb) as holiday gifts for friends. About 800 pounds of flour, chocolate, butter, a conversation about the differences between strudel and streusel topping, and 8 hours later – the friendship is cemented.  Further, bigger decisions are made: it’s been decided that when they open a bakery (or, apparently when Strudel moves to Seattle and they decide to start blogging) it will be called Strudel & Streusel!

So, there it is!  Can you see now, that if it weren’t for babka, where would we be?

For this Streusel, it’s hard to say.  But, I do know this:  if I had never met Strudel, I would have never tried baking babka and I would have never sought out Zabar’s babka in NYC (Strudel used to live close to Zabar’s and had waxed on about their babka to me, many times).  They make a wonderful babka, with a loaf that weighs nearly 2 lbs! Life changing baked goods, for sure.

The recipe below comes straight from the Cook Street Cooking School cookbook where Strudel and I met.  Babka is great as a brunch or snack time bread; it’s not actually sweet enough to really be considered a dessert food. The bread itself has only a little bit of sugar, so most of the sweetness comes from the fillings, usually chocolate or cinnamon.

The recipe from Cook Street suggests making it with either chocolate or cinnamon, but Strudel had the brilliant idea to combine both in one.  It’s truly a fabulous bread, and I swear, Strudel’s prediction of people loving you more once you’ve baked it for them, well, I’m afraid I’ve found that to be true, too!

3 eggs (reserve one white for wash)

In a stand mixer bowl, combine the water, yeast and a pinch of the sugar and let sit for 5 minutes.  Attach the paddle attachment and then add in the remaining sugar, milk, salt, vanilla, butter and half the flour.  Beat on medium speed until smooth.  Add the yolk and then each egg, beat in between each addition.  Switch to the dough hook attachment and knead in enough of the remaining flour until a soft ball is formed.

Let rise in an oiled bowl until doubled, about 45 minutes.  Preheat the oven to 350 degrees Fahrenheit.  Oil two standard loaf pans or a beautiful new polish pottery loaf pan and a 12 muffin pan for a loaf and some babka muffins!

Once doubled, divide the dough in half on a floured large pillowcase (I’ve started rolling my breads out on a pillowcase because I’ve found that I can roll it out really thinly).  Roll out each half to the size of the pillowcase.  Melt additional butter (or half & half) and brush on lightly over the surface of the dough.

2 c. chocolate chips (I used ghirardelli 60% cacao, is there really any other chip?)

Mix the filling together and sprinkle half of the mixture onto the first rolled out dough.  Spread it around evenly. 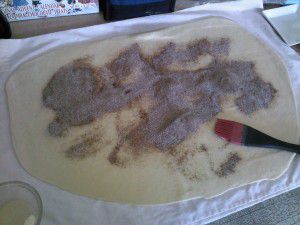 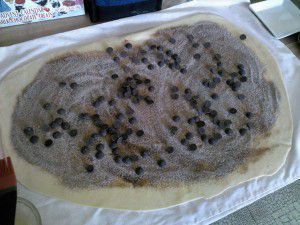 I sprinkled the chips on after the dry mixture had been spread around.  Roll up the pillowcase from the longest edge creating a fat snake of dough. 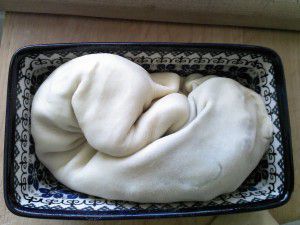 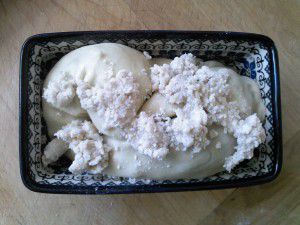 Weave the snake into the oiled loaf pan, creating swirls.  Repeat this process with the other dough and remaining half of mixture and chips.

If you want to make babka muffins, then once the snake is rolled up, cut it into 12 pieces with a bench knife and squish each piece into one well of the muffin pan. 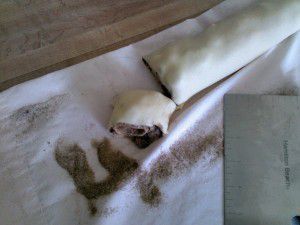 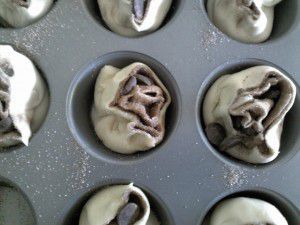 Let the loaf rise 15 minutes while making the streusel topping.  If making the muffins, just lightly brush them with the remaining egg white (beaten with 1 T. water) and bake for 15 to 18 minutes.

Cream the butter, cinnamon and powdered sugar until fluffy.  Add the flour in and mix until crumbly.

Brush the risen loaf with the egg white wash and then generously top with the streusel.

Let cool and remove from pans. 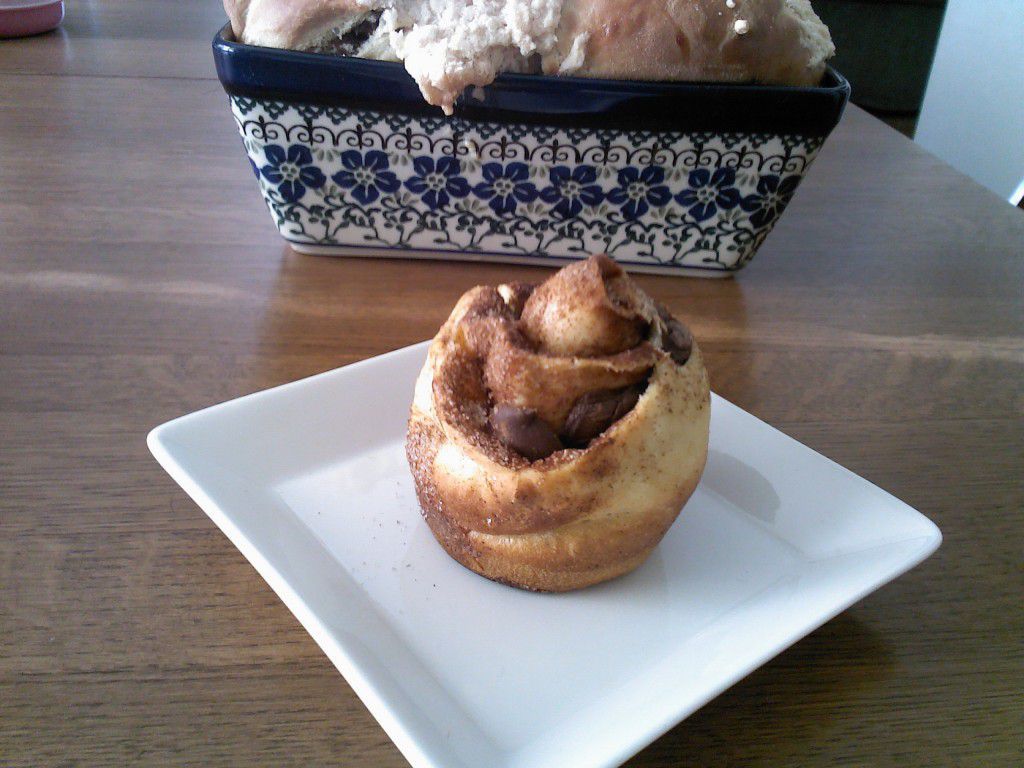