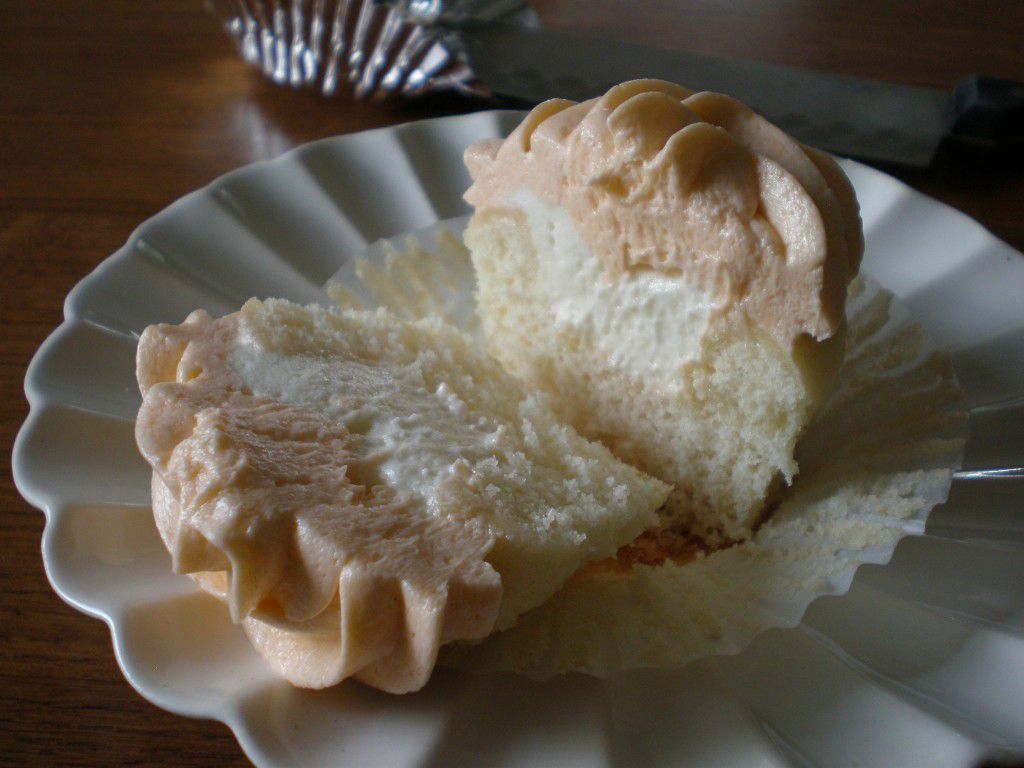 Who doesn’t remember those tart and creamy orange creamsicle popsicles as a kid?

Do they even still make these things?

Check out the Popsicle story.

I couldn’t resist trying to make a cupcake taste like them.

Only requirement – make an original recipe for 12 cupcakes with at least 2 c. of C & H sugar

I competed with 15 other amateur bakers on Sept. 2nd and whoa – I learned some very valuable lessons about a cupcake competition…

First and foremost, presentation is EVERYTHING!

Silly me, I thought a cupcake competition was all about the taste and look of the cupcake.

That was part of it but more than anything the judges cared about how you presented them.

One competitor presented flower cupcakes in a basket with ribbons, another made a cardboard piano and each cupcake had the musical notes to Blue Suede Shoes on top (did I mention the theme was Fabulous Fifties).

The blue ribbon went to a gentlemen who placed malted milk balls in the bottom of 12 parfait glasses and then sat a malted chocolate cupcake on top with whip cream and a cherry and straws sticking out to look like a milk shake, they were called Cupshakes!

Check out the judges as my cupcakes were passed out… 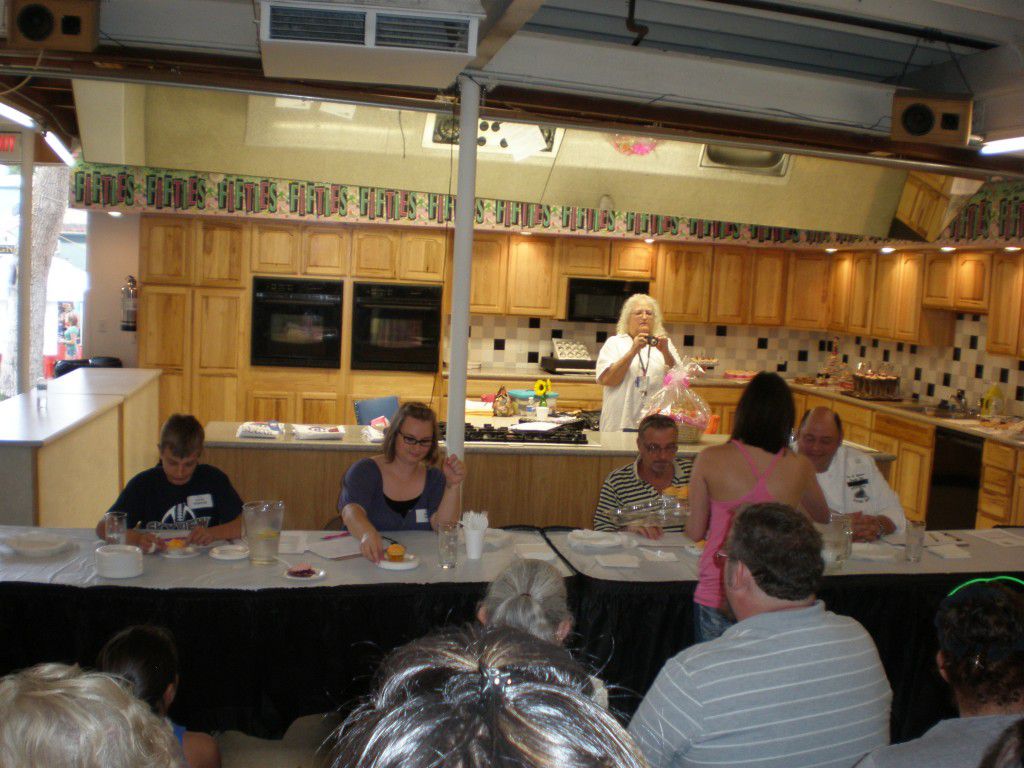 After the winners were announced (Cupshakes got the Blue) Addison, my daughter, told me she thought I should have won first place…I love that kid. 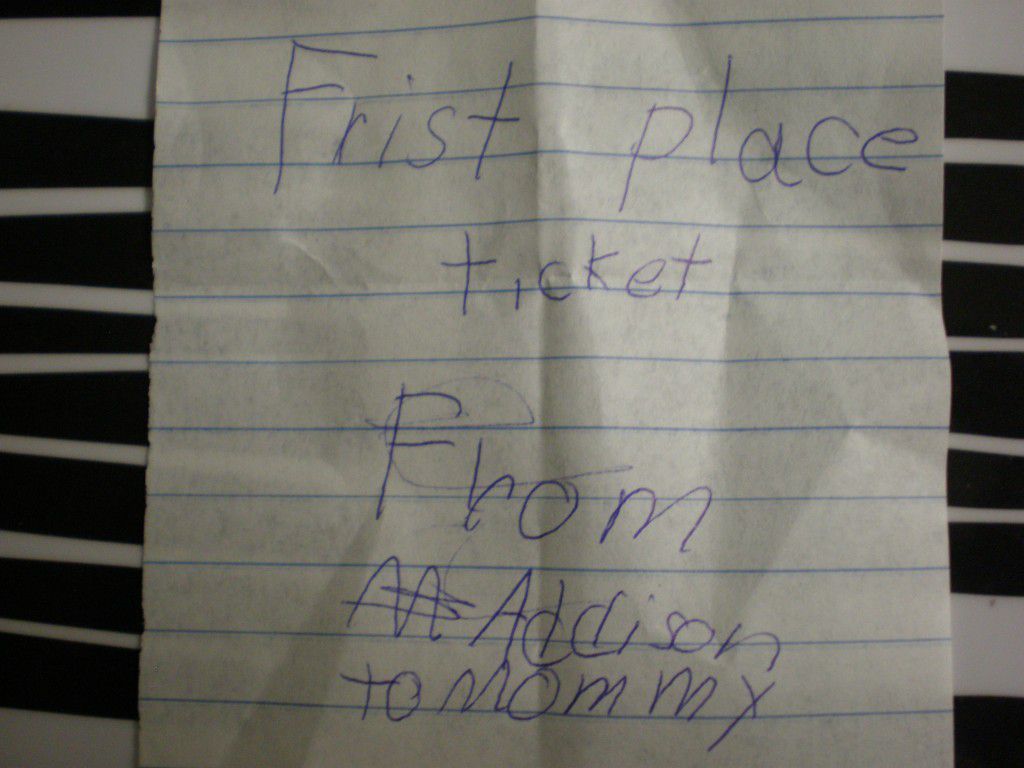 For the Cream Filling…

Sift the flours, baking powder and salt together into a  bowl and set aside.

In the bowl of a stand mixer, using the paddle attachment, beat the butter on high for several minutes until ribbons form. 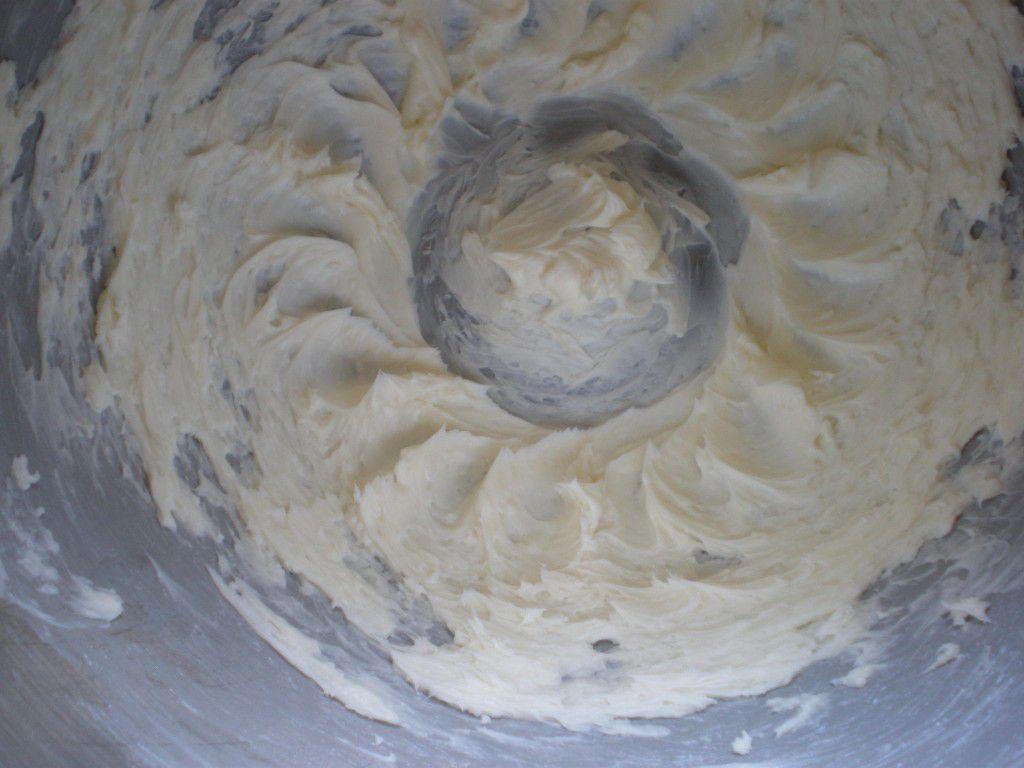 Preheat the oven to 350 degrees Fahrenheit. 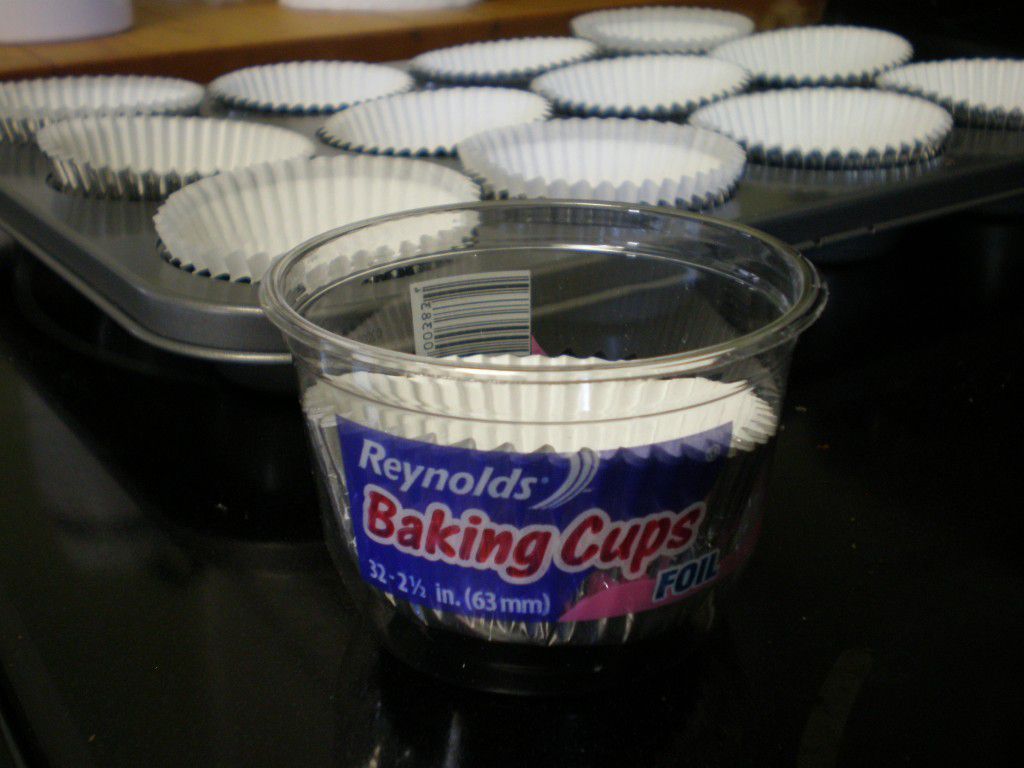 Line a 12 place muffin pan with Reynolds (silver) Cupcake liners.  I have tried a lot of different fancy cupcake liners and I truly believe these are the best!

Fill the liners about 2/3 full.

Beat the butter again with the paddle attachment and stand mixer on high-speed until ribbons form.  Add the powdered sugar and beat on low-speed while slowly pouring in the mandarin orange juice and orange extract.  Add the gel food coloring.  Beat on high-speed for several minutes until the frosting is light and fluffy.

In a small glass bowl, melt the 2 oz. of chocolate, 20 to 30 seconds at a time in the microwave.  Stir between each heating interval and continue just until the chocolate is melted.  Set aside.  In another glass bowl with a hand mixer, whip the heavy cream until starting to form peaks.  Slowly add the melted chocolate and continue to whip just until mixed.

Using a small serrated knife, cut a small hole (like an upside down party hat) in the top of each cupcake. 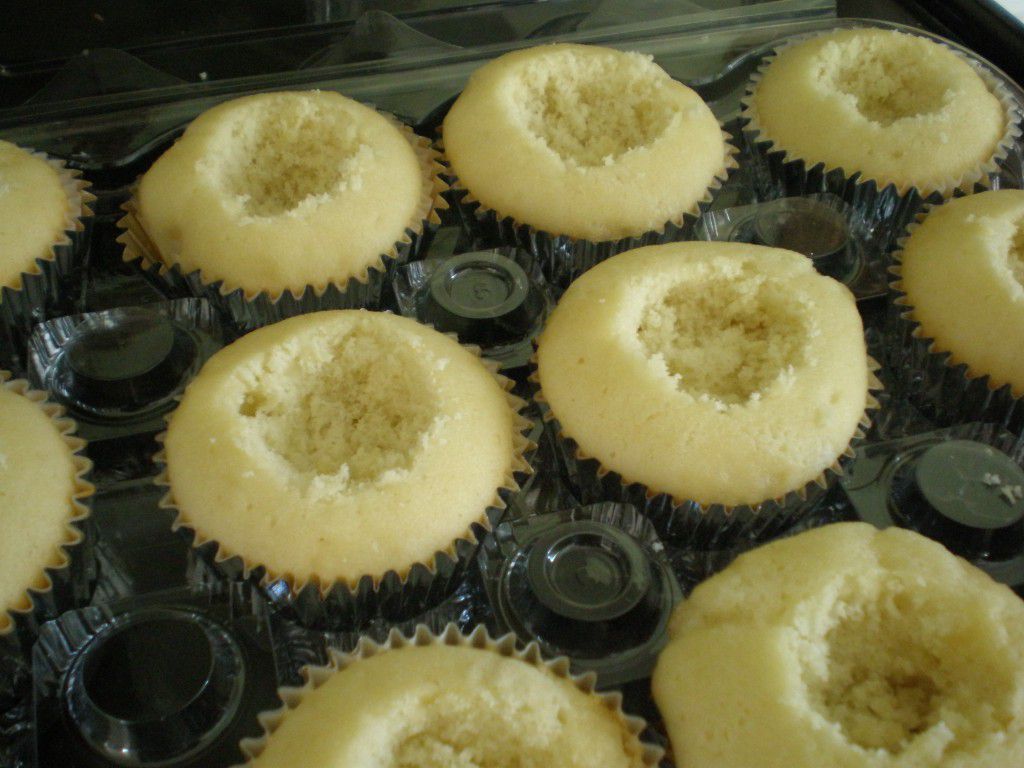 Fill each hole with the cream filling.  Using a 1M Wilton top, decorate the tops of each cupcake with the orange buttercream frosting. 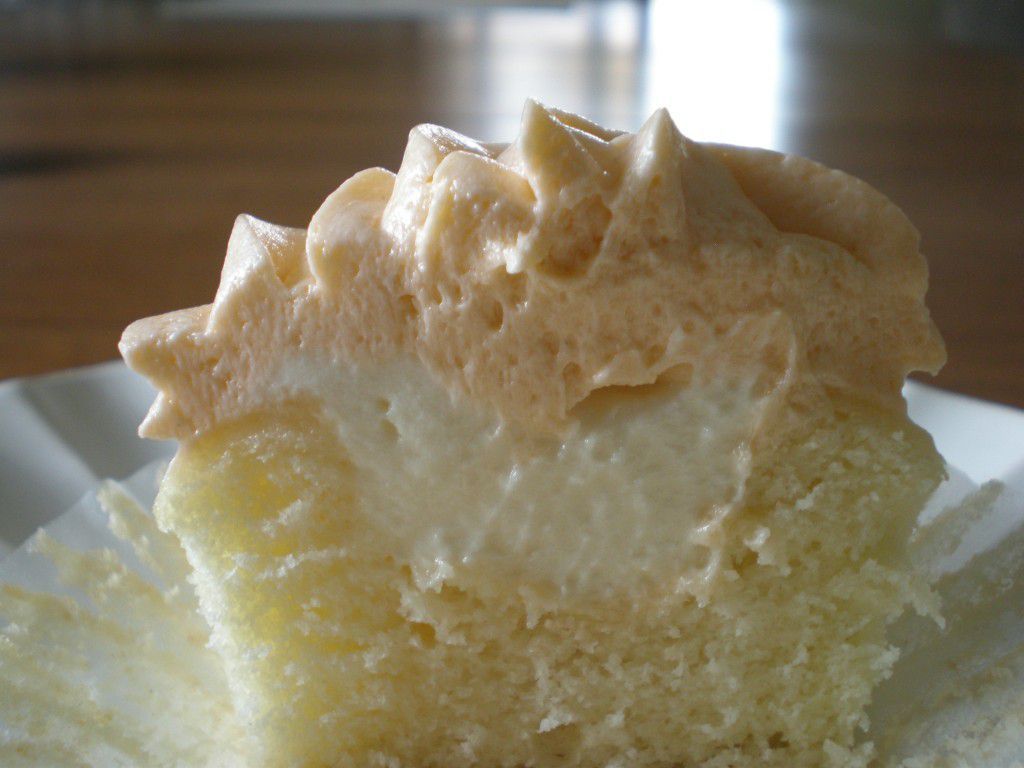 Avoid the urge to decorate with sugars or sprinkles.  The popsicle is not crunchy and these shouldn’t be either.  Enjoy! 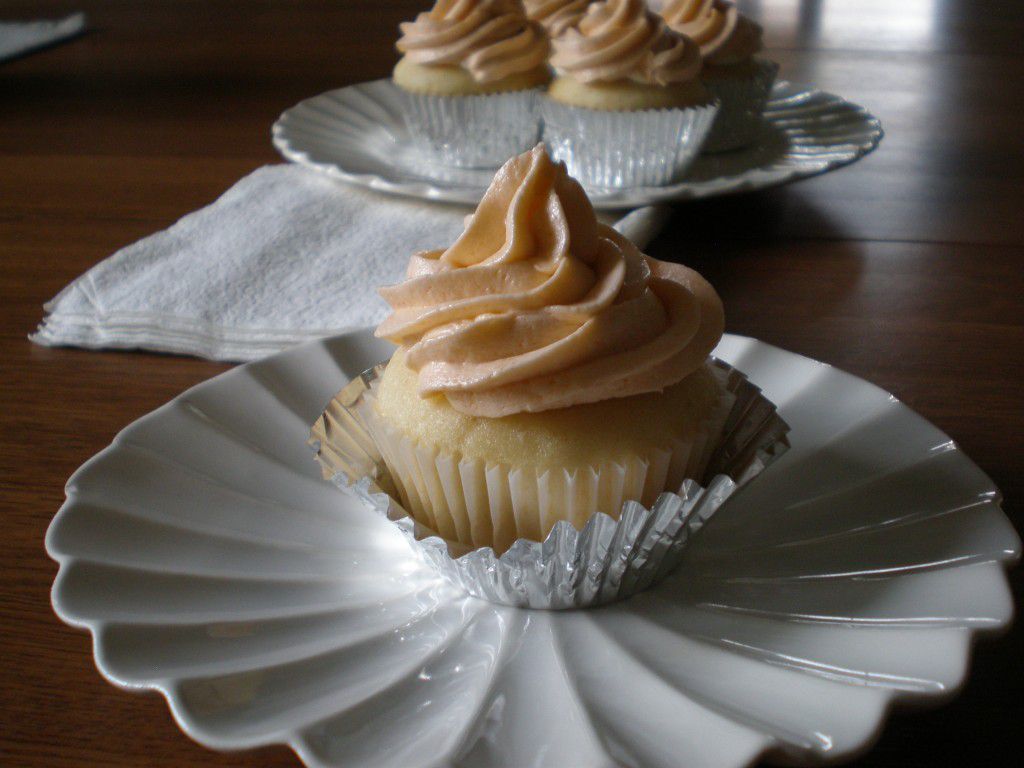