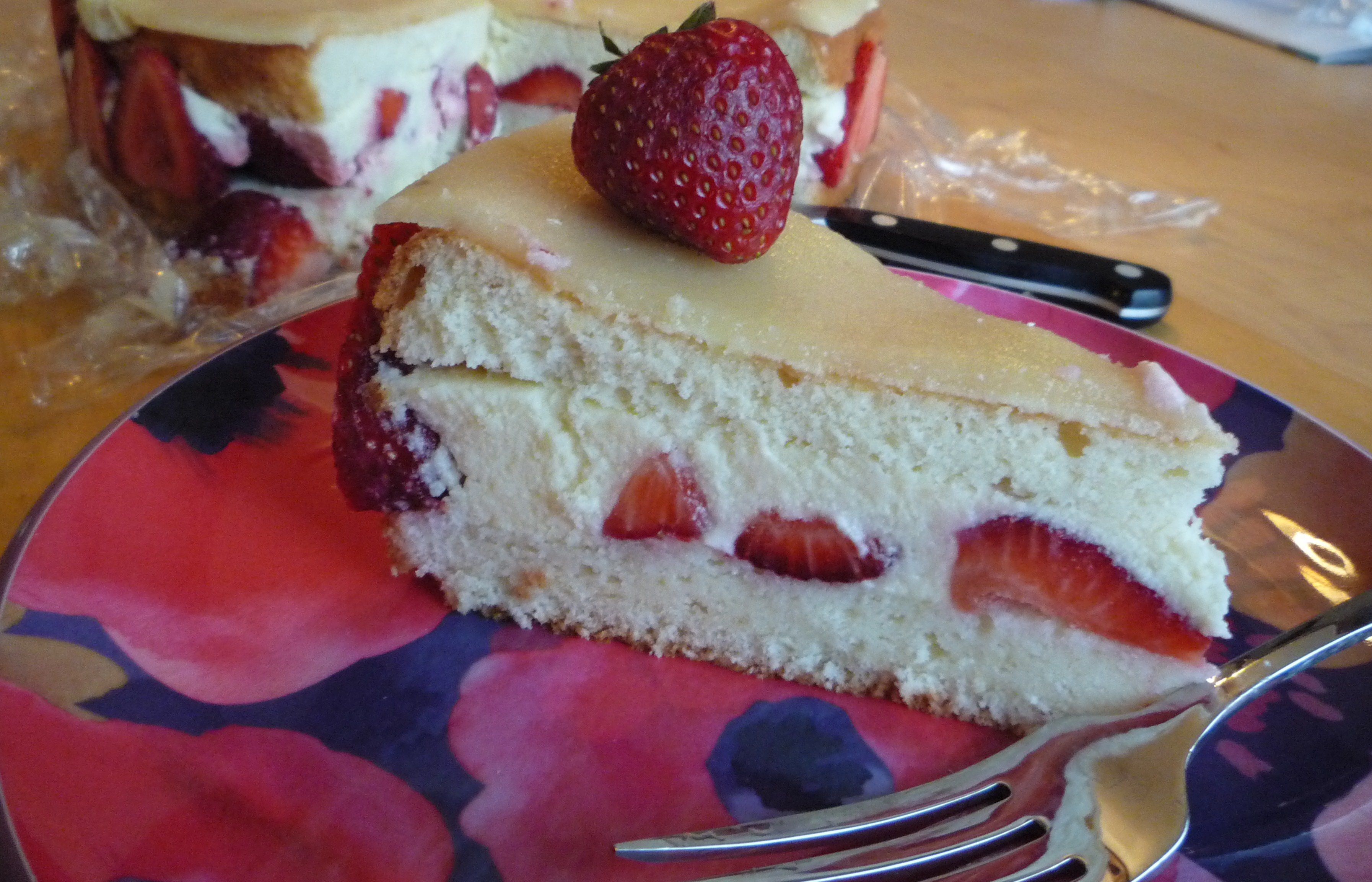 Jana of Cherry Tea Cakes was our July Daring Bakers’ host and she challenged us to
make Fresh Frasiers inspired by recipes written by Elisabeth M. Prueitt and Chad Robertson in the beautiful cookbook Tartine.

Oh dear. Here we go again with the DBs… here’s what was great about this month’s challenge: Streusel and I got to make it together! What fun is that?!

The less fun part: the cake itself. Sorry, DB, neither of us was crazy about the cake. I know she’s not that pretty, and we could’ve done more to dress her up, but we were irritated enough by the time we were done that neither of us felt like it. The cake also didn’t have great flavor; it was perfectly fine, but not worth the fuss. The directions were also a little confusing, so overall, I have to say it’s not something either of us will be making again.

First up: make the cake. It’s pretty straightforward, and I did that before Streusel got to town. Here’s what the completed cake looked like. Nice, right? 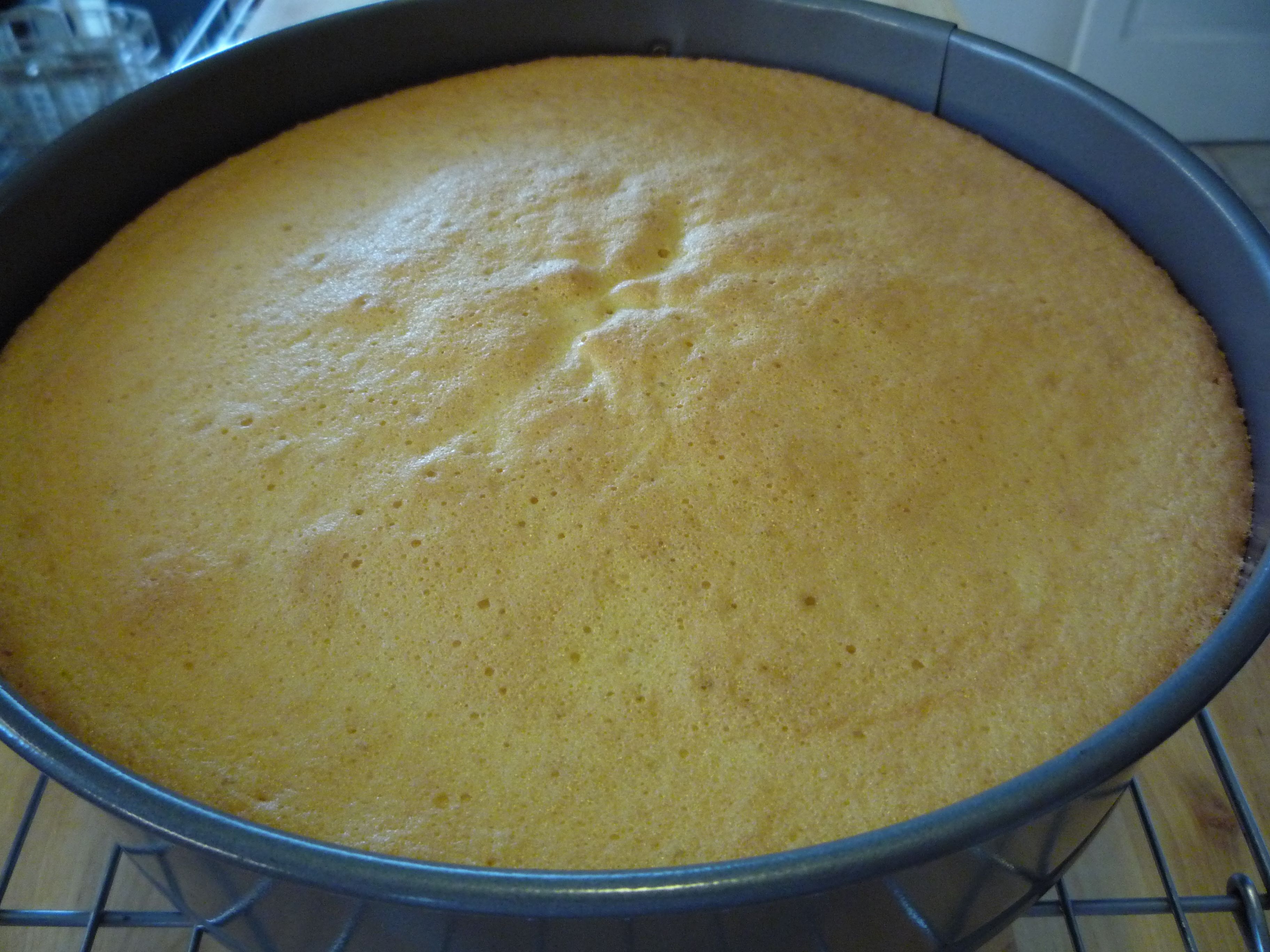 Streusel took on the task of making the pastry cream. Step #11 in the directions (“measure 1/4 cup of the chilled pastry cream into a small stainless steel bowl that will sit across the sauce pan with the simmering water, without touching the water”) caused much confusion. Streusel figured out that she meant a double boiler. 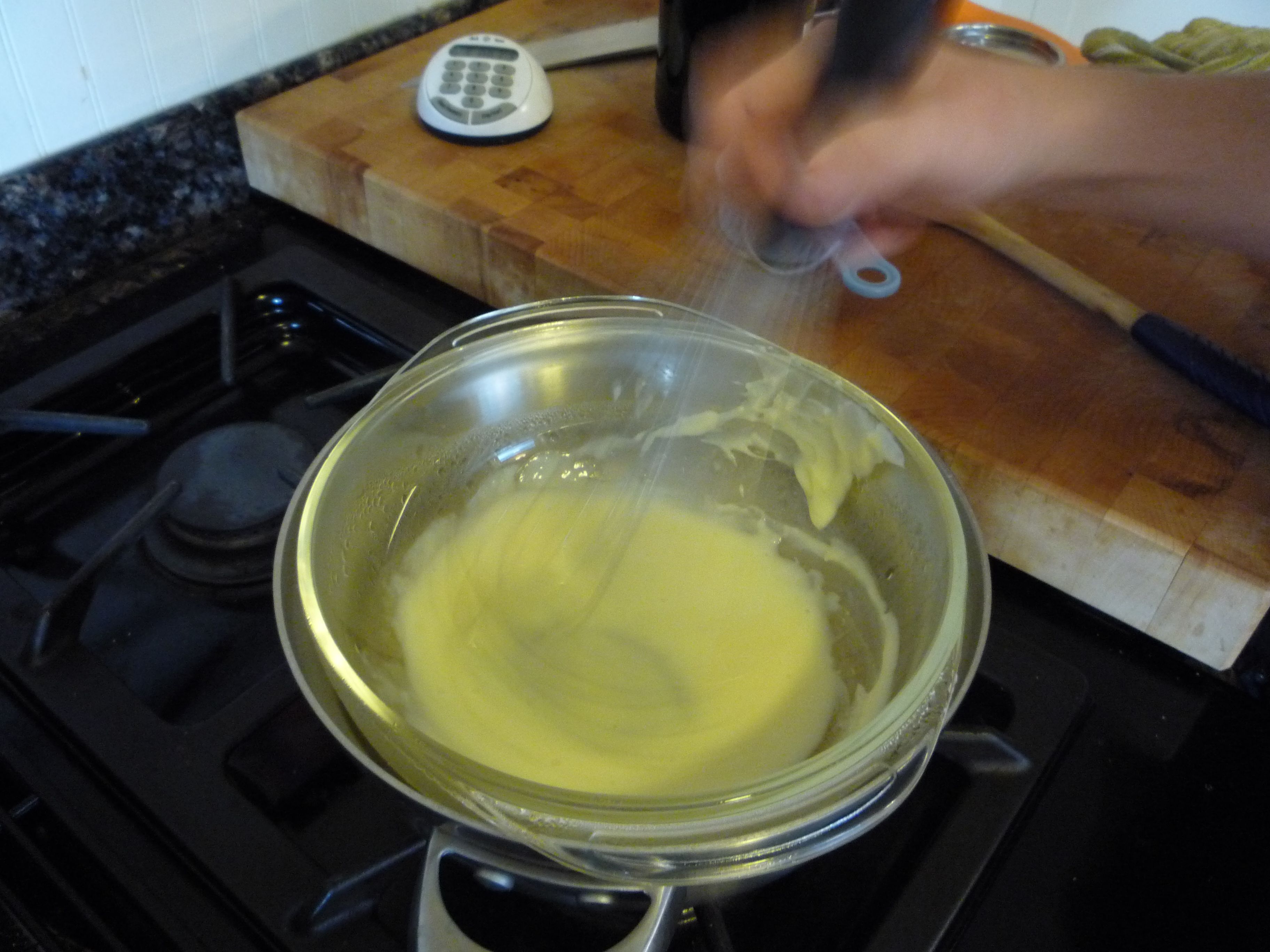 Once that situation was settled, Streusel also made the simple syrup.

One other issue: the sides of the cake pan are supposed to be lined with plastic wrap, but we couldn’t get it to stay. Maybe that’s just a technique that we don’t have. Anyway, we ended up lining the bottom of the pan with plastic wrap, and having it hang over the sides (if I made it again, I’d probably put a cardboard circle directly under the cake, and the plastic wrap under that. That way, it could be lifted out and put onto a cake plate).

Anyway, here’s what it looked like as we started lining the sides with strawberries: 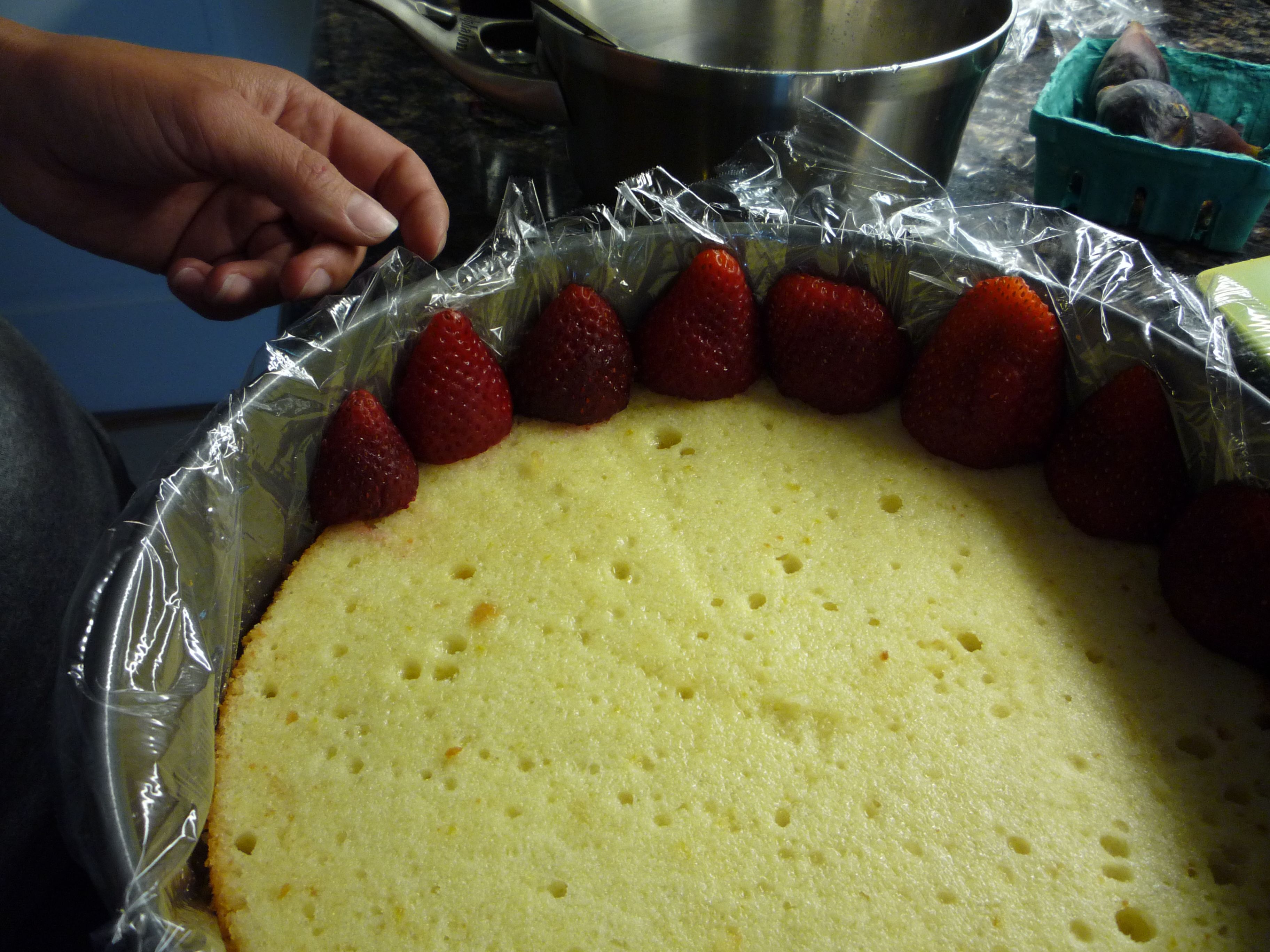 Once it was lined, we piled in the rest of the strawberries. The cream was supposed to be piped in, but ours was way to thin to pipe. So, we just piled it in, and topped the frasier with the other layer of cake.

I then rolled out the almond paste. I’d already cut and measured a circle the size of the pan, so that I could shape the paste to be the exact size of the top of the cake. 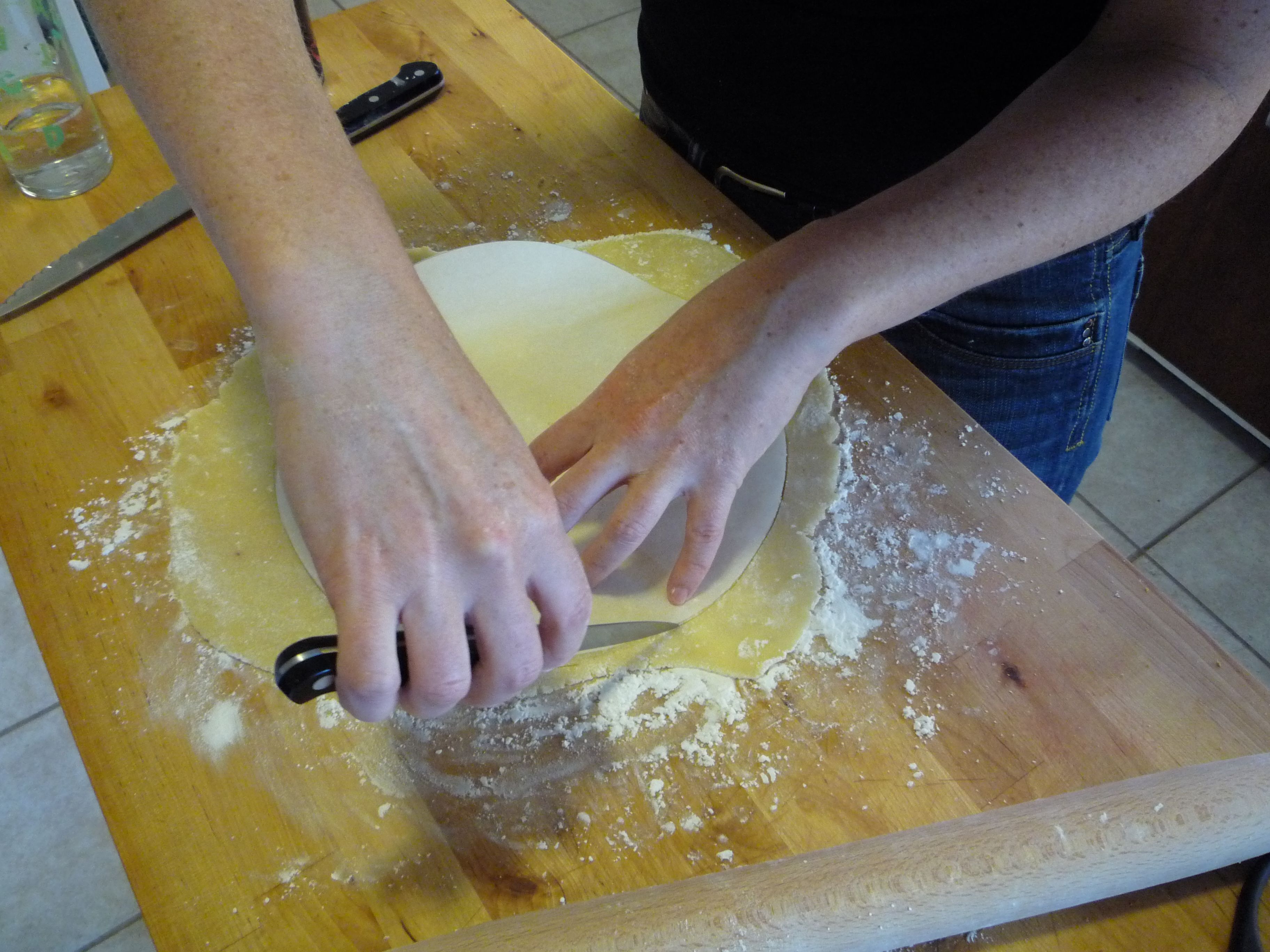 After that, the entire cake was refrigerated for about a day. Once we removed the side of the springform pan, here’s a view: 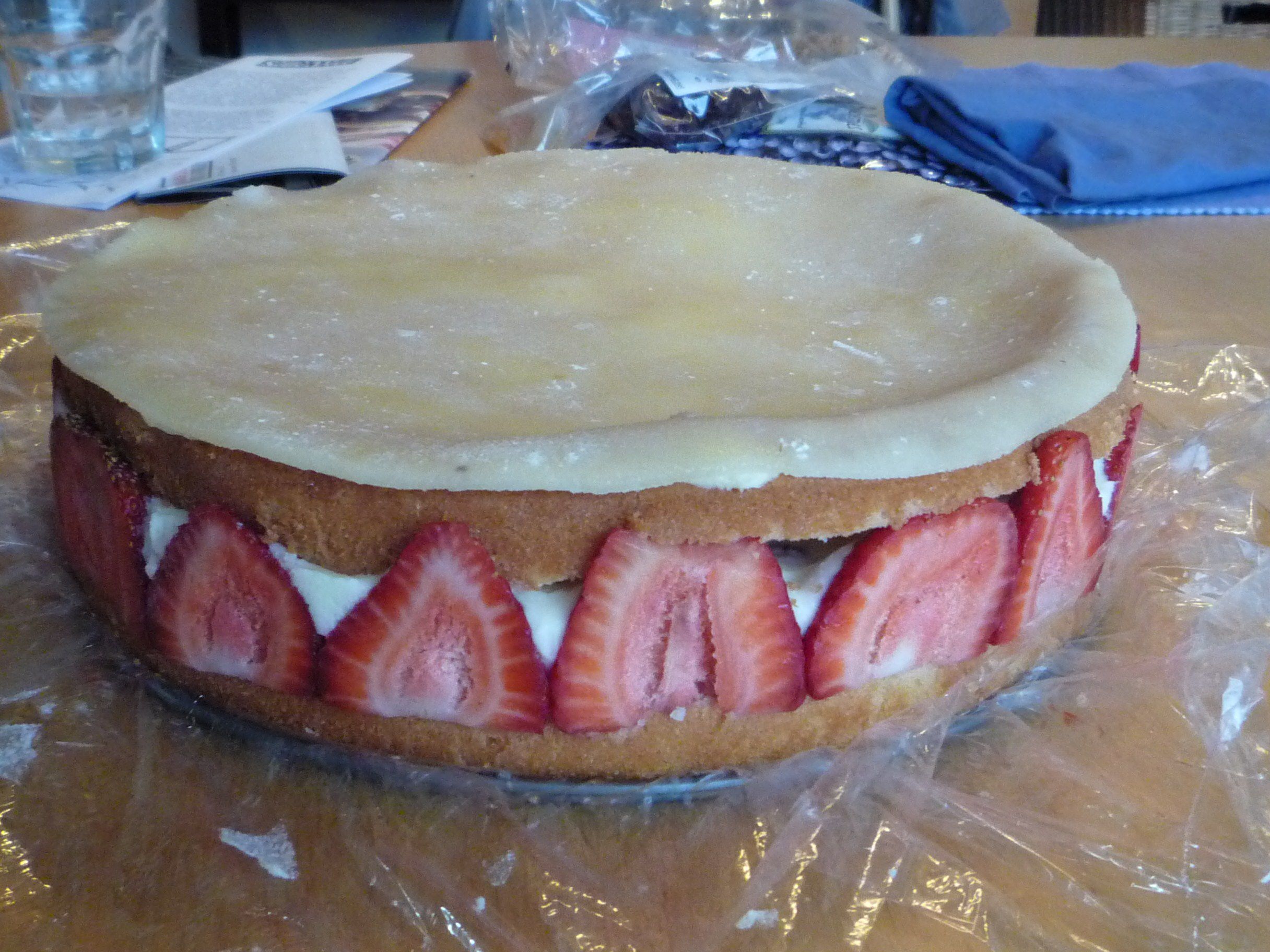 Just in case anyone is intrigued, here’s a link to the recipe: